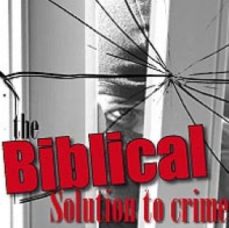 The Biblical Solution to Crime

There was a time when few of us were touched by crime. Then we all began to know somebody who had been affected by crime. Now each of us have our own stories of how we were stolen from, directly threatened by crime, or worse.  At a recent meeting, the 80-odd people in attendance were asked to name some of the crimes they had personally experienced. In short order, those present related house breaking, car theft, cell phone theft, fraud, assault, hijacking, armed robbery and murder – all experienced recently either by themselves or their immediate family.
At almost any social occasion, you can find South Africans swapping stories about a brush with death or the long-hand of crime having stolen from them and their loved ones.
Crime is a reality that affects each one of us. The situation in South Africa became so bad that the government at one time even placed a moratorium on crime statistics, forbidding the police to release statistics of incidents of crime in South Africa to the voters and tax payers they are meant to represent and serve.

The cost of crime
According to a study by the American Management Association, US businesses annually lose over $10 billion to employee theft, over $4 billion to embezzlement, over $2,5 billion to burglary, over $2 billion to shoplifting, over $1,3 billion to arson and over half a million dollars per incident of computer fraud.
According to the US Department of Commerce, approximately one-third of all business failures each year can be traced to employee theft. US law enforcement officials estimate that almost half of all employees are guilty of stealing.  Retailers in South Africa lose billions of rands each year to shoplifting and even more to theft by employees.

Who pays?
Obviously somebody has to pay for the costs of all this theft. You and I and all the other customers have to share the burden of the billions of rands shoplifted or stolen by employees. In addition, we have to pay for the increased insurance premiums, for the additional security personnel and equipment necessitated by this shoplifting spree. It all gets added to the price tag of everything we buy.
Of course, we also pay for the cost of crime through our taxes and in supporting the police force, legal and judicial systems and the prison service, which are all meant to be designed to protect us from the criminal elements of society. But far more seriously, a vast number of South Africans are directly suffering the effects of crime.

What causes crime?
I have heard university professors and other experts speaking about how very complicated it is to analyse the sociological and economic factors that lead to the phenomenon of crime etc. Yet, if we turn to the Bible, we will find a very straightforward answer: “Why do people commit crimes so readily? Because crime is not punished quickly enough.” Eccl 8:11
Surely that is the common sense answer. It is so obvious. Crime is increasing in our society because our courts seem to be more obsessed with the ‘rights’ of the criminal, but not as concerned about the rights of the victim, or the policemen for that matter. Murderers have been released while policemen have been prosecuted. Rapists have been set free on amnesties and Presidential pardons, while victims have been imprisoned for defending themselves. Right has become wrong and wrong has become right!
“Woe to those who call evil good and good evil, who acquit the guilty for a bribe, but deny justice to the innocent.” Isa 5:20-23

Capital punishment
For those who hold the Word of God as authoritative, capital punishment is not a matter of choice or opinion poll, or even of court or parliamentary decree. It is God’s clear command: “Whoever sheds the blood of man, by man shall his blood be shed; for in the image of God has God made man.” Gen 9:6
God instituted capital punishment long before the enactment of the Mosaic Law. In fact, capital punishment was declared not only for Noah’s time, but “for all generations to come.” Gen 9:12 “Anyone who strikes a man and kills him shall surely be put to death. If a man schemes and kills another man deliberately, take him away from My altar and put him to death. Anyone who kidnaps must be put to death.” Exod 21: 12-16
“If anyone takes a life of a human being, he must be put to death. Whoever kills a man must be put to death. I am the Lord your God.” Lev 24:17-22
“Anyone who kills with a sword, must himself be killed by the sword.” Rev 13:10
“Bloodshed pollutes the land and atonement cannot be made for the land on which blood has been shed, except by the blood of the one who shed it.” Num 35:33
God’s Law remains in force after Calvary (Acts 25:22). As our Lord Jesus taught: “Do not think that I have come to abolish the Law or the prophets; I have not come to abolish them but to fulfil them. I tell you the truth, until Heaven and earth disappear, not the smallest letter, not the least stroke of a pen, will by any means disappear from the Law.” Matt 5:17-18
By obeying God’s Law and punishing murderers with the death penalty, a nation can cleanse itself from the guilt of innocent blood. On the other hand, a nation that refuses to avenge the taking of innocent human life, must share the guilt of the murderer. (Deut 21:1-9)
The opposition of certain ‘human rights’ groups to the death penalty is selective. As capital punishment is only inflicted upon murderers, one is given to wonder why these groups are so concerned for the rights of murderers? Should we not provide compassion and justice for the many thousands of victims and families of victims of violent crimes?
Since the state unilaterally suspended the death penalty for murder in South Africa (in 1989), criminals have inflicted the death penalty on well over 500 000 innocent victims in South Africa. Who is campaigning for their rights? And what about the 300 000 who could be murdered in the coming decade? Surely any civilised society has the moral right and the duty to protect itself from those who have no respect for human life?
The taking of a murderer’s life is akin to the amputation of a diseased limb in order to save the rest of the body. All murder is serious and demands capital punishment. Capital punishment is necessary for justice, for the rule of law and for the protection of the innocent.

Restitution
In cases of theft, arson or malicious damage to property, the Bible decrees restitution. Restitution is the restoration of a thing to its proper place or owner. It is reparation for injury or damage to property. The Bible requires that the restitution goes entirely to the victim of the crime. Restitution is also required for culpable negligence.
God’s Law is clear: the criminal is held accountable and is responsible to pay for his crime. He is to work and earn, in money or kind, that which is required for the reparation of what he stole, damaged or destroyed.
“… he should make full restitution; if he has nothing, then he shall be sold for his theft. If the theft is certainly found alive in his hand, whether it is an ox or a donkey or sheep, he shall restore double. If a man causes a field or vineyard to be grazed and lets loose his animal, and it feeds in another man’s field, he shall make restitution from the best of his own field and the best of his own vineyard. If fire breaks out and catches in thorns, so that stacked grain, standing grain or the field is consumed, he who kindled the fire shall surely make restitution.” Exod 22: 3-6
The punishment is to fit the crime. The more serious the crime, the more severe the punishment (Deut 19:15-21).
Under God’s Law, there would be fewer criminals, fewer victims and much less burden on the tax payer. Under our present humanistic system, our prisons have become a higher institute of learning for criminals, where they cross-train one another and work out how not to get caught next time. Instead of the victim and his relatives receiving restitution, under our present system the victims are forced to pay taxes which provide food, accommodation and entertainment for the criminals, while they languish in prison. The solution to this intolerable situation includes a return to the Biblical pattern of restitution.

Making sure crime doesn’t pay
There are also some practical, common sense measures which could ensure that crime does not continue to pay in South Africa.
1. Repeat offenders should be made to complete the rest of their
sentence before beginning their second sentence.
2. No bail should be available for repeat offenders.
3. All violent criminals should bear the full responsibility for their actions,
whether or not they were deemed mentally competent, drunk or of
diminished capacity, or under the influence of drugs (Num 35:16-21).
4. Penalties for violent youths should be the same as for adults. Those
who commit adult crimes such as rape and murder should suffer adult
consequences (Ezek 18:10-13).
5. A return to the Biblical principles of execution for all first degree
murder, rape and kidnapping; and restitution for all theft of, or damage
to, property. (Exod 21 & 22).
6. As it is impossible for any police force to guarantee the safety of every
citizen, no hindrance should be placed upon the right of law-abiding
citizens to obtain and use firearms for self-defence. As the vast majority
of violent crimes are committed by criminals with unlicensed weapons,
it is clear that restricting the rights of citizens to own, carry and use
licensed firearms, cannot prevent violent crime. Disarming the
potential victims of crime can only serve the purposes of the criminal.
We therefore must reaffirm the Biblical rights and responsibilities of
citizens to obtain, own, carry and use firearms for personal or family
defence. (Exod 22:2; Neh 4:14; 1 Tim 5:8).
It is time for the civil authorities to take consistent, strong and resolute
action to protect law-abiding citizens and to punish law-breaking
criminals.

“Administer justice every morning; rescue from the hand of his oppressor the one who has been robbed, or My wrath will break out and burn like fire because the evil you have done – burn with no-one to quench it.” Jer 21:12