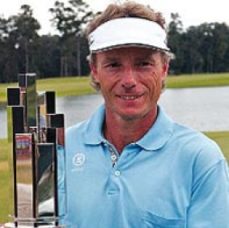 THE OPENING ROUND
•   Born 27 August 1957 in Southern Germany and the third child.
•   His father served in the German army during WWII and, after finishing
conscription, was a brick layer.
•   The lack of money in the family home set him on the road to a career
in golf when he began caddying for pocket money at 8 years old.
•   He earned the nick name ‘Eagle Eye’ as a young caddy because he
always found his players’ lost golf balls. He devoted spare afternoons
and weekends to honing his golfing skills.
•   Bernhard’s parents weren’t very supportive of his plans to play
professional golf after school, but his father was impressed when
Bernhard bought his first car – a yellow Ford Escort – from  his winnings
at the German National Open in 1975.
•   In 1981 he was officially the best golfer in Europe.
•     He met his American wife, Vikki, at the Inverrary Classic in 1983 –  they have been
married for 25 years and have four children.

TEEING UP HIS TESTIMONY
•    Grew up in a religious Catholic family going to church almost every
single day.
•      Tried to keep religious rules (i.e. not eating meat on Fridays, going to confession and
serving as an altar boy) but did not realise the need for a personal relationship with
Jesus until much later in life.
•    Loves reading the Bible and often writes down a few verses every
morning when on tour and carries them around with him.

It has been said of Bernhard Langer that his extraordinary talent, consistency and resilience have kept him at the peak of the game for decades and have seen him outlast most of his contemporaries by winning European tour events more than twenty years after his first victory. Yet, according to the player himself: “You can take nothing for granted in golf. Often last week’s tournament winner will miss the cut this week and sometimes finish twenty shots worse.”
Despite growing up in Germany where golf is a minority sport, young Bernhard’s single- minded determination raised him to become ‘World Number One’ at one stage. In 1985, it seemed as though Bernhard had everything, but the Lord had his own plans for the 27 year old. Dressed all in red with wavy blond hair down to his shoulders, Bernhard held off Seve Ballesteros and surged past a stumbling Curtis Strange to win his first major championship – the Masters. Imagine the excitement he felt when he was presented the green jacket in the Butler Cabin. Then came the live interview with CBS Sports and an innocuous question about whether he looked at the leaderboard during his round.

God uses our mistakes
The response, as best Langer can recall, went something like this: “I looked up for the first time after nine holes and I thought I was playing well, but Jesus Christ! Curtis Strange was four shots ahead.” Only later did Langer realise what he had said and the number of people he had offended.

“I was not a Christian at the time,” he said. “It was powerful expression and a lot of people used it. A few weeks later, I had a number of fan mail – well, anti-fan mail – that asked who was I to be blaspheming on national television? To be using Jesus’ Name in vain?”
Langer is deliberate in everything he does. He often puts 20 clubs in his bag during a practice round, trying to figure out which club is best for that course and the various conditions. His strength has always been his mind. So his reaction to the ‘fan mail’ was no different. The letters didn’t make him defensive, they made him think. He began to ask himself who he was, what was important, what was meaningful to him.

Trusting God
“I had all the money I needed and a beautiful young wife. And yet it wasn’t enough. I didn’t have real peace. A friend on the tour, Bobby Clampett, asked me to attend a tour Bible study one evening. I agreed as I wanted to know more. I figured I had it all together – I believed in God and hoped I would go to heaven. I always thought that being a good person and keeping the commandments would get me to heaven.” This time, Langer took Clampett up on the offer and brought his wife, Vikki. The message that night was one of faith, not good deeds. He started reading his Bible and asking more questions. “I read John 3:3 where I learnt I must be born again. Since I committed my life to Christ, my faith has played a big part in my golf and every area of my life.”
Bernhard’s obstacle-strewn path to the top is perhaps most famously illustrated by his struggle to overcome the yips – putting problems that more than once dogged his career. Bernhard observes: “My putting was so bad that people were coming to watch me much like people who go to motor racing to see a crash!”

Faith that endures
Langer has 64 victories around the world in his career, two of these at the Masters. He went 16 consecutive years with at least one victory on the European tour, a hallmark of his consistency. He became a stalwart for Europe in the Ryder Cup – 10 times as a player and last year as captain of the biggest European victory in history. But for all his achievements, Langer is regarded as much for how he lives with and for Christ, than what he has won.“So whether you eat or drink, or whatever you do, do it all for the glory of God.” 1 Cor 10:31
Fast-forward to 1991 at Kiawah Island in the Ryder Cup. Playing against Hale Irwin in the final singles match, Langer stood over a 6-foot putt with the trophy riding on the outcome. His miss produced one of the most compelling images of how intense the Ryder Cup has become. Langer threw his head back in utter angst, his neck straining as he let out a guttural cry of despair.
A moment like that could end someone’s career. But Langer won the next week in the German Masters by making a 15-foot putt in a playoff. “If the Ryder Cup happened to be 10 years earlier, I might have fallen apart. Who knows?” Langer said. “Having a personal relationship with God, knowing there is a bigger picture, knowing there is more to life than gold and success, I could cope with it.  And I got over it pretty quick. My faith has helped me not only in difficult times, but in good times. In fact, at all times.”

Seeking God first and seeing Him add the rest
Bernhard doesn’t beat his peers over the head with his Bible. He does not consider himself superior to others. And when he’s on the golf course, he is thinking about winning. “I did a lot of praying at the Ryder Cup,” he said of his captaincy, which produced a resounding victory. “I prayed for a close match – I’m grateful my prayer didn’t get answered!”

Langer made it back to the Butler Cabin in 1993 with a four-shot victory at the Masters, the widest margin of victory in 10 years at Augusta National. Fred Couples helped him put on the green jacket.  Then came the live interview with CBS, and a question about how special it was to win the Masters for a second time. Langer couldn’t help but mention that he had won on Easter Sunday and how important that day is to Christians.It is exciting to see leading sportsmen using their talents to bring glory to God. If all of us “seek first the Kingdom” then we know “all things will be added unto us” Matt 6:33. What an amazing promise from our Lord and King!