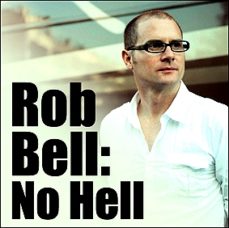 Rob Bell: No Hell
The Evangelical movement erupted in controversy recently in reaction to Rob Bell’s new book, ‘Love Wins: A Book About Heaven, Hell and the Fate of Every Person Who Ever Lived’. Bell is being both defended and demonised by passionate evangelicals. The conversation has reached volcanic proportions which could benefit Bell greatly in the sale of his book.

Rob Bell’s background
Rob Bell was born in 1970. His father was a judge appointed by Ronald Reagan to the federal judiciary. Bell grew up in a traditional Christian home; he attended Wheaton College and later achieved a Master of Divinity Degree from Fuller Theological Seminary.

Bell shot to world fame through his innovative techniques in presenting the Gospel – namely through his 15 minute NOOMA DVD film clips. Bell and his wife Kristen started and run Mars Hill Church, named (ironically) after the place in the New Testament where Paul declared “I even found an altar with this inscription: to an unknown God.” (Acts17:23) Mars Hill sees nearly 10 000 people on a Sunday.

The theological beliefs on the Mars Hill website are written in narrative or story form (unusual for any church). They affirm a belief in the inspiration of God’s Word and the sacrifice of Christ. Their emphasis is on relationship. There is no mention of ‘hell’ and it appears they promote strongly the idea that the primary reason for the sacrifice of Christ is to restore relationship both to Him and among ourselves. There is also no mention of ‘sin’. The narrative does indicate that the children of Israel disobeyed God and neglected the poor and ‘mistreated the foreigner’.

A literary storm
The controversy regarding Bell’s latest book involves his leanings toward universalism. If your ultimate goal is to appeal to the masses, especially youth, then universalism is the way to go. I’ve discovered in my teaching of apologetics and in my conversations with youth that well over 50% of them have no problem with accepting the idea that Jesus saves not only Christians but also Muslims, Buddhists, etc. They are either unaware of or they easily slough off, the verse found in John 14:6 “Jesus said unto him, I am the Way, the Truth, and the Life: no man comes to the Father, but by Me.”

Universalism and pluralism
Many Christians are pondering the absence of hell in Rob Bell’s theology. The logical conclusion is that Bell is a Universalist (though he claims not to be). If God eventually saves all men there is no need for a hell. They believe if there is a hell, then it is temporary, even earthly. Those in hell experience judgement for their sins, but finally, God’s love wins – hell is emptied as each and every suffering soul responds to the grace of God. This teaching clearly contradicts the teaching of Christ. “These will go away into eternal punishment, but the righteous into eternal life.” Matt 25:46.

Pluralism is the belief that there is legitimacy in all religions and belief systems. Every major religion prepares a person for an eternal existence with God. Notably, Rob Bell has stated, “I affirm the truth anywhere in any religious system, in any worldview. If it’s true, it belongs to God.” I too believe that all truth belongs to God. But, I believe in a hell and hell is full of God’s truth but hell is a curse, not a blessing. Though there may be some truth in every religious system, it definitely doesn’t mean that system is of God. Indeed, many religions that oppose Christianity were specifically designed to draw people away from Christ, not to Him! It seems Bell is promoting universalism and pluralism.

People attempting to redefine God
Truth is not something we can just pick and choose. Post-modernists would like to decide for themselves just what is and is not truth. The belief in hell is particularly despised in today’s culture and the argument goes something like this: God is so good he couldn’t possibly send any one to an eternal torment. (This view is cleverly and subtly espoused by Bell in his book).

A multitude of modern theologians have run to the defence of God; they believe God’s reputation has been sullied by traditional theologians who through the centuries have attributed the existence of hell to Him. Our omniscient, all-wise, all-knowing God is in no need of being defended by the puny minds of men.

It is incomprehensible that men who would bring mega-destruction over the last few decades, men who would allow multimillions of babies to be aborted, men who would delve into a lifestyle of immorality and unbelief think it their duty to demand that God answer for the existence of hell and redefine Himself to suit their whims.

The removal of hell from our theology will change who God is. There must be equilibrium in our understanding of God. When we choose only to see the love of God we tend to diminish the justice of God. The existence of hell clarifies the love of God. God sent his only begotten Son to deliver us from such a place.

If hell doesn’t exist, then what has Christ saved us from? I’m not sure if those in Heaven can peer into hell but if they can, would they not be even more convinced of the love of God?