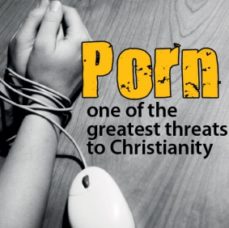 Pornography is out there, and it’s not going away any time soon. So to help your kids guard against it, you have to prepare them. According to Josh McDowell, author of books including ‘Evidence Which Demands a Verdict’ and ‘More Than a Carpenter,’ who has turned his attention of late to the devastation of pornography on our culture and the Church, this may rank among the greatest threats to Christianity we’ve ever seen.

Bad morals
“I am an apologist,” says Josh. “I set forth positive reasons why to believe, in order to see young people come to Christ. But about five or six years ago, I kept sensing that there’s a problem out there. When I would interact with young people, something had become a barrier. I realised it was pervasive sexual immorality and pornography on the internet.
As an apologist, the one thing that can undermine everything that I teach is not in the area of apologetics, it’s in the area of morals. If you don’t deal with this issue, you won’t fulfil your role as a Biblical apologist.”

The trap
Josh’s son, Sean, who is the head of the Bible Department at a Christian College as well as an author, speaker and apologist, works with youth full time. In that process, Sean has gathered a litany of sad stories of apparently model Christian young men and women who have fallen into the trap set for them by a culture saturated with sex and lust.

A secret sin
“That’s just the problem – most children and students aren’t looking for pornography. Pornography is looking for them,” says Josh. “Of those teenagers who have seen pornography, between 78% and 91% were never looking for it. Research shows that 38% of those will become addicted.”
How big of a deal is this for the Body of Christ? Stats that Josh has documented “show that upwards of 50% of pastors struggle with pornography. 62% of men who attend Evangelical churches regularly struggle with pornography, and 68% of teenagers.
This is probably the greatest threat to the cause of Christ in two thousand years of Church history, because it undermines your life, your walk with Christ and your beliefs. My fear is that many pastors are not addressing it because they too are involved in it.  We have to address this.”
Poisoning faith
“Apart from shame and loneliness,” explains Josh, “pornography produces a question about the authority of the Scriptures, of Christ, of the Resurrection, of the Church and of parents. It starts to darken the door of the brain to consider truths of the Christian faith. Once you become involved in pornography, it takes over all your thinking, your morals, and your life. You have to understand: pornography just takes over your life. It takes over your relationships – your view of people, of women, of children. And as a result, it doesn’t leave room for your faith. You can’t become involved with pornography and have a healthy walk with Christ.”

There is hope
Pornography and sexual promiscuity actually change the physical structure and chemistry of our brains, making it more difficult to love, bond and have sexual relationships with our spouses. That, says Josh, is why he’s launched ‘Just 1 Click Away,’ a website devoted to networking the old and young with resources and help.
Another critical issue which the McDowells seek to address with this new campaign against pornography is the dreaded task parents have of educating and preparing their children.
“Your kids will encounter pornography,” says Josh. “It’s so sad, but it’s true.” We can take away internet access, tv and smart phones from our children, but these measures will barely stem the tide of pornographic images and themes which bombard them from other sources we cannot control, such a friends and classmates.” Even if we isolate our kids and teens from the outside world, they will still become adults and have to confront all at once the sexual culture we tried to stifle. Our job as parents and mentors, believes Josh, must now be to focus on preparing our children to respond in a godly way when faced with porn.
www.just1clickaway.org provides resources and training for parents and adults on how to open the channels of conversation with their children, how to arm them to face the battle ahead, and how to consistently say “No” to the degrading influence of our culture’s worst addiction. 

SHANE MORRIS regularly writes for  www.lifesitenews.com , this article was first published on their website.