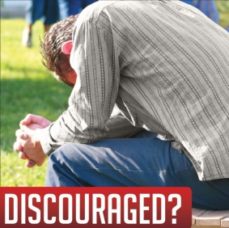 I have had the privilege of interviewing or speaking with many high profile Christian leaders, pastors, authors and missionaries during the many years I have been involved with Christian publications. It always surprises me to find that many of them struggle with discouragement and even depression.
Even the greatest enter the valley
We shouldn’t find it surprising or even unusual that even the most spiritual of people have their moments of doubt and discouragement. Moses, on one occasion at least, was overwhelmed by his circumstances. After he had listened to the constant complaining of the children of Israel, he basically told the Lord: “I’m fed up. Just kill me. I don’t want to deal with this for another day.”
Elijah, after his contest with the prophets of Baal on Mount Carmel, heard that Jezebel had put a contract out on his life. He was so overwhelmed by his circumstances, so discouraged, so uncertain, and so filled with doubt that he said to God: “Take my life.”
Burdened beyond measure
Even the great apostle Paul had times when he was discouraged. He wrote to the church at Corinth: “We were burdened beyond measure, above strength, so that we despaired even of life.” 2 Cor 1:8.
Jeremiah, the great prophet, faced it as well. He was ridiculed and harassed for giving out the Word of God. Because he was tired of the pressure he was facing, he wanted to stop giving out God’s Word altogether. He said, “The Word of the Lord was made to me a reproach and derision daily. Then I said: ‘I will not make mention of Him, nor speak anymore in His Name.’ ” Jer 20:8-9.
We have hope in Christ
If you are feeling discouraged and downhearted, you are in good company. Hang in there. The dark days will pass. There is light at the end of the tunnel (and it isn’t an oncoming train!)
Isaiah had a word for those struggling with doubt and discouragement: “Who among you fears the Lord and obeys His servant? If you are walking in darkness, without a ray of light, trust in the Lord and rely on your God,” Isaiah 50:10.
The life-giving light
In times of darkness and gloom remember God is light and Jesus said: “I am the light of the world. If you follow Me, you won’t have to walk in darkness, because you will have the light that leads to life.”  John 8:12.
King David had many great and glorious victories that made him one of the standout leaders in history and certainly one of the great heroes of Biblical history. But he also had hard times when he was lured into discouragement and despair. Times when he was hounded by Saul,  and when he tripped up over the incident with Bathsheba and when his son Absalom rebelled against him and subsequently was killed. David scaled great heights and deep valleys. We read that David was greatly distressed, but David encouraged himself in the Lord His God.
Encouragement and light
When you encounter dark days, follow the example of King David. Encourage yourself in the Lord. Get into His Word, for it brings light
(Ps 119:130). Enter His presence for there you will find fullness of joy.
(Ps 16:11) and surround yourself with positive, encouraging believers who are able to build you up. (Heb 10:25). 