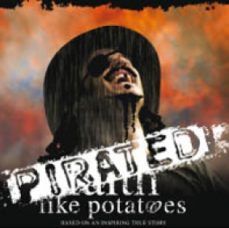 In the old days pirates would physically jump ships, attack and pillage. They had the guts to take on their victims face to face. Today it is a nameless, faceless game where we rob people sometimes without even a second thought.

Piracy and breaching of copyright is one of the areas where we ride our self-made modern Black Pearl. For most of us, it’s an ambiguous, grey area where we don’t know the exact copyright laws and, truth be told, don’t really want to know.  What we fail to realise is that in the long run we are shooting ourselves in the foot. Our emerging local music and film industry is heavily affected by our actions.

What exactly is the state of piracy in this country?
According to SAFACT (South African Federation Against Copyright Theft) “The invasion of pirate DVDs, increasingly of movies not available legitimately anywhere in the world, has resulted in a market share in excess of 50% in 2005 for pirated product…This level of piracy would equate to a potential loss of approximately 3 million unit sales.” Five years ago this market share percentage was 10%. So what before was something we could afford to overlook, now has become a huge threat to our movie industry.

Frans Cronje, South African producer of the movie “Faith like Potatoes” and owner of Global Creative Studios, has felt the sting of piracy first hand. “We know of at least five different places where our DVD has been pirated and sold illegally on the streets, including Britz, Stellenbosch and Benoni.” This has a domino effect on sales, as shop owners become reluctant to order the DVDs to sell themselves, when they know that the public can buy cheaper versions from street corners and flea markets.

It’s interesting that piracy of a movie like “Faith like Potatoes” is so rife, considering its obvious Christian content. One has to question, then, how Christians themselves view piracy. How many are buying the illegal copies of the DVD and thereby becoming complicit in the act of theft and law breaking? The reality of the situation, which often people don’t want to acknowledge, is that with each illicit DVD sold, production companies are losing much needed revenue. For a new movie company this could create a make or break situation.  Frans explains, “People need to realise that producers need to recoup the massive investments that they put into their movies and music. Producers actually bond their homes in order to get a movie off the ground and until we repay our investors, everything including homes, hang in the balance.”

Churches unwittingly also contribute towards the problem when they show screenings of movies to their congregations without first obtaining permission and paying the required screening fee. Frans further states, “People think if any media product contains some Christian reference that it should be free. The reality is also that many people are just not aware of the fact that it’s illegal to show any movie in a public place, without written consent of the copyright owner.”