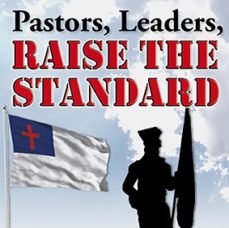 Pastors, Leaders, Elders: Raise The Standard!
Recent reports from both the local and international Body of Christ concerning the disturbing trend in marital conflict and divorce among senior Church leaders must be a major cause of concern for Christians. There appears to be a discernable lowering of standards in the Church of Jesus Christ, especially with regard to the covenant institutions of marriage and the family. The sacred institution of marriage has taken a battering in the Church recently with several high profile Christian leaders reportedly involved in highly controversial divorce cases.

There is no reverence
Apparently, a US televangelist who divorced his wife after an adulterous relationship with a member of his worship team is returning to the ministry one year after marrying the woman he committed adultery with.
Other local and international Christian personalities appear at conferences and on television shows to rapturous applause, while their marriages are falling apart. It appears the sheer star power of these Hollywood-type celebrity figures have effectively relegated the God-given institution of marriage to a minor inconvenience.  Televangelists with global audiences and million dollar budgets hardly miss a beat when reports emerge of marital infidelity and impending divorce, insisting “the show must go on…”! If all of this sounds suspiciously Hollywood – it is.
The current abominable practise of trivialising marriage within the Body of Christ is a direct result of a steady but almost imperceptible lowering of Biblical standards in the Church. The sanctity of marriage and the family – the most fundamental and enduring pillars of society – is currently being eroded by the very institution tasked with upholding its integrity. Marriage is often sacrificed on the altar of ministry expediency and apparently no longer forms part of the integral qualifications for the high calling of Christian ministry.

The Church in dire straits
Sadly, when it comes to marriage, the Church is almost indistinguishable from the world. Christian leaders are allowed to continue in their ministries, preaching and teaching the Word of God, even though their marriages are failing.
Tragically, the Body of Christ seems to have come to terms with this lowering of Biblical standards. The Church is riddled with leaders who are public successes, but personal failures. I learned very early in my Christian life that a man is nothing more than what he is in his family.
In God’s sight, the covenant relationship’s of marriage and family is infinitely more precious than any achievements in ministry. The fact that so many Christian leaders are prepared to sacrifice their marriages and families in the quest for more ministry success is the surest indication they have no intention of honouring God. Incidentally, God still hates divorce.

A sacred institution
There appears to be very little accountability and commitment to Biblical principles in the Church, when celebrity status trumps the authority of God’s Word. The Biblical qualifications for an overseer in the Church of Christ in 2 Timothy 3 is clear. A leader must be the husband of one wife. Sadly, this instruction is rendered irrelevant by the behaviour of many in contemporary Christianity. The sacred institutions of marriage and the family are being undermined in the Church, with devastating consequences for both the Body of Christ and society.

The catastrophic fallout of family breakdown litters the social landscape of South Africa. Ordinary Christians reinforce this disturbing trend by flocking to events where big name preachers appear, despite knowing their marriages are in trouble. As a tragic consequence, the holy institution of marriage and by implication, the Word of God, is made subservient to these high profile ministries.

Inevitable consequences
When foundational institutions like marriage and the family are devalued by the very institution called to defend and protect it, the inevitable consequences are evident not only in the Church but also the society we are called to serve. Sexual sin has infiltrated the Church because we are more concerned with being politically correct than Biblically correct. Political correctness has paralysed the Church with the majority of Christians afraid to call sin by its name.

As a consequence, sin – especially sexual sin, thrives in the Church. Openly homosexual bishops are ordained in the Church and paedophiles elevated to pastoral roles to sexually abuse children. Pastors and high profile Christian personalities cheat on their wives; divorce them, marry their adulterous partners – and then return to the ministry. However, God is not buying this.

The standard is His Word
The standard He gave us is His eternal Word. And it contains His never changing Commandments, principles and precepts. When the Church of Christ fails to uphold the Truth of His Word, we lower the Royal Standard, allowing deception and sin to infiltrate our lives. The Royal Standard is flying at half mast in many of our churches today because the full Gospel is not being preached. Big name television preachers have elevated themselves above God’s Word as a result of their fame and fortune. And even though these leaders brazenly flout foundational Biblical principles, people still choose to follow them. Marriage, a holy and sacred institution is being trivialised and devalued in the Church so that man can be elevated to idol status. Much of the Church today is teaching an unbalanced Gospel. God’s Love and Grace is taught exclusively and to the detriment of God’s Law, Justice and Holy Nature. The solution is to raise the Royal Standard of God’s holy Word and cut off access to the enemy. Isaiah 59:19 says, “When the enemy comes in like a flood, the Spirit of the Lord will lift up a standard against him”.

God’s Holy standard
Raising God’s Holy standard in His Church entails preaching the entire Word of God, including the fact that Jesus did not come to abolish God’s Law but fulfil it, Matthew 5:17-20. Proverbs 1:7 says, “The fear of the Lord is the beginning of wisdom”. A distinct lack of wisdom and the fear of God has legitimised behaviours in the Church we considered unacceptable a few years ago. When the Church of Jesus Christ compromises His Word, the implications are not only felt in the Church but in the surrounding society. As a result, we are losing the battle against rampant sexual sin in society because we have allowed it to infiltrate the Church.

Judgement in the Church
So how do we remedy this? We raise the Standard of God to its rightful place in the Church by reintroducing a largely neglected principle called, ‘The Fear of the Lord’. The fear of God is absent in the Church. The holy and reverential awe of God is being replaced by a familiarity that borders on contempt. As a result, many take God for granted. We have surrendered to an insipid gospel that promotes the erroneous concept that God loves us so much we can get away with almost anything.

To be sure, God loves us unconditionally because He is the source of love. However, He is also perfectly Holy and just – and as such, a God of justice. God’s Holy nature demands justice. And the Scriptures declare the judgement that preserves that justice “begins at the house of God” 1 Pet 4:17. Sin has infiltrated the Church to the extent that it has lowered the Biblical Standard of Righteousness to a carnal level.

Biblical Christianity
In Dr. Peter Hammond’s Discipleship Handbook, he writes, “When something is repeated in Scripture, it emphasises its importance. Loving God, His Name, His Law and His Word is mentioned 88 times in the Bible. Trusting God and His Word occurs 91 times. There are 278 references to fearing God in the Bible. The fear of God is mentioned more times than any other aspect of devotion. The reverential awe, respect and fear of God must be the fundamental attitude of our faith. Any view of God which doesn’t lead us to fear God and obey His Law cannot be a Biblical view”. Consequently, much of what is transpiring in the Church today has nothing to do with Biblical Christianity.

The benefits of the fear of the Lord
The Bible, especially the Book of Psalms reveals so many benefits of the fear of God that it must be considered the greatest act of worship. If the fear of God is central to our worship, we would never belittle the sacred institutions He gave us. Psalm 103:11, 17-18 says, “For as high as the Heavens are above the earth, so great is His mercy for those who fear Him…But the mercy of the Lord is from everlasting to everlasting and His righteousness to children’s children, to such as keep His covenant, and to those who remember His commandments to do them”.

The Scriptures clearly indicate that God is a covenant keeping God and as such, places great significance on covenant relationships. A healthy reverential awe of God helps us understand that we cannot trivialise covenant institutions like marriage and the family and still expect God’s blessing and favour. The Church is undoubtedly in crisis. What is urgently required is the preaching and teaching of God’s Law, the fear of God and the fact that God’s wrath against sin is still a New Testament reality.

We need Grace and the Law
Consequently, the Grace of God is cheapened by the absence of the teaching of God’s Law. No Christian will fully appreciate the Grace of God if they fail to understand the wrath of God. Hebrews 10:26-27 warns, “For if we sin wilfully after we have received the knowledge of the truth, there no longer remains a sacrifice for sins, but a certain fearful expectation of judgement and fiery indignation which will devour the adversaries”.

Significantly, God is not impressed by mega ministries, fancy buildings and television programmes. He is pleased when we obey His Word and honour the sacred institutions He gave us. So how will we know the fear of God is resident in the Church again? One indication will be when Christian leaders begin setting a Godly example to the flock by laying down their ministries in order to save their marriages. Until that happens, marriage and the family remains relegated to third class status in the Church.