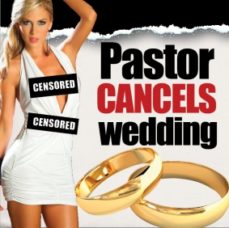 We have all often asked ourselves, “What Would Jesus Do?” in a particularly challenging situation. Sometimes the answer is obvious, and other times may not be so clear-cut. One such murky example that has caused a huge firestorm in the Christian world, is the recent decision of an American pastor to cancel a couple’s ceremony on the day, because of the bride’s cleavage-bearing dress.

A skimpy dress
The wedding was scheduled for 3pm; at 2pm, the pastor greeted the bride and groom and upon noticing the bride’s dress hanging up, jokingly asked, “Where is the other half of the dress?”
Not thinking anything of the remark, the family laughed it off and continued applying make-up to the bride. Around 2:30pm, the pastor asked a leader of the church to check with the bride and her party if they had sorted out the missing fabric from her dress.

Stranded at the altar
The bride informed the leader, “This is it,” upon which the leader relayed the news to the pastor. The pastor then personally informed the bride and groom at separate times that he could not perform the wedding with the bride in her selected dress.
Pastor Michael Canty of Truth Ministries Holiness Church told the bride she would have to cover up her breast area and find a way to lengthen the dress; the bride informed the pastor that this would be impossible to accomplish in such a short space of time.
After much discussion by both parties (nearly one hour after the service was due to begin) the pastor expressed his regret at not being able to perform the ceremony and  walked back to his office, closing the door.

Too conservative?
The family was outraged, the guests confused and the couple hysterical over the embarrassment and wasted expense of flowers, travel etc. Local news stations picked up on the story and Christian blogs were ablaze with fiery comments and criticism.
It is not known if this fledgling ministry (only 14 months old) has a pre-published set of guidelines as to the expected attire of women/code of conduct, but one can assume that (as their name denotes) they prize holiness and modesty.
Most of these types of churches (which are conservative) would have the following common standards for women:
• Skirts should be below the knee; no pants
• Shirts should not be form fitting
• Blouses or shirts should never reveal cleavage, (typically using a 2 finger-width rule from the neck all around)
• Sleeves should cover elbows
• Absolutely no midriff; essentially women should be dressed modestly, clean, presentable, and directing no attention to self.

What is God’s concern?
Was this pastor out of line for ruining this young couple’s wedding day? Or did he take a stand for modesty that deserves commendation? It depends on who you ask…as Christians views differ drastically:
“I am sad for the bride who wanted a church wedding in a [tarty] dress, but even sadder for the pastor who missed his teachable moment,” commented one Christian author.
Another blogger had this to say: “Can you wear this dress on the senate floor? Can you be a doctor and wear this dress at work? If the answer is NO then you cannot wear this to church as well. Just like the world has its proper decorum, so does the Church of Christ…”
“The pastor’s fashion sense overrode God’s will?! There is NOTHING in Scripture that mandates/governs what the bride cannot wear to her own wedding,” said another.
One person noted that, “God is not looking at her outfit, God is not looking at how ‘sexy’ she is. God is looking at the fact that a man and woman are coming together in unity to become one. We need to stop putting our focus on the outside.”

What would Jesus do?
So was the pastor too judgemental and attempting to throw stones at a sinner (like the Pharisees Jesus rebuked in John 8) or, was he upholding the Biblical standards of holiness and respect that should be shown in the House of the Lord? Have we lost all reverence and a fear for the things of God? Or do we need to adapt with the times and meet people where they are at?

Should we welcome the unholy?
The children of God are commanded to be holy, sanctified and set apart; a royal priesthood. Thus, while we cannot expect unsaved people to adhere to these standards of Biblical morality and modesty, we ourselves should strive to preserve them in our midst.
If God doesn’t care what we wear, Scripture wouldn’t tell us to adorn ourselves in modest apparel, in clothing that is proper for women professing godliness (1 Tim 2:9-10).
More than anything, this incident high-lights the difficult (and unpopular) position of the modern Church: to be a holy house, that welcomes unholy people. A bastion of purity and morality, embracing the broken, the rebellious, the prodigals.
So, was the pastor wrong to call off the wedding? Did he do more harm than good in this situation? Did he represent the love of Christ in his decision?
All too often people picture Jesus as a meek and mild, long-haired Saviour who was a pacifist at heart…naturally this impression of Christ will colour one’s answer to the elusory question, “What Would Jesus Do?”
Conversely, could this minister’s actions have pushed the (presumably unsaved or backslidden) couple and their guests further away from God the Father? Was the principle worth sacrificing the people?

Seek God’s wisdom
Ultimately only the individuals who were there that day, can account for what truly happened and in what manner it was dealt. Perhaps the church in a pre-marital counselling session stipulated a dress code. Perhaps they assumed a level of decorum and respect that was clearly lacking on the day.
Regardless of the specifics, this incident should be a warning bell to churches and leaders to pre-empt similar situations happening in their congregations. May the Lord grant us wisdom! 

To Think About:
• Should he have proceeded with the ceremony?
• How can churches avoid situations like this in future?
• Should they prescribe acceptable dress codes?