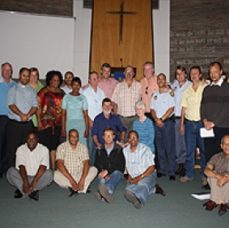 On 4th September, 1991 Jacques Smit, a Warrant Officer in the Detective Branch of the Ceres Police, surrendered his life to Jesus.  Over the next several years as his relationship with his Lord deepened and matured, he had a growing burden to reach out to the spiritually lost in the community, and for unity in the Body of Christ.

In 1996 he was appointed to the Serious Crimes Division.  More and more he found that his relationship with Jesus not only helped him to perform his task better, it was also a real support when dealing with many of the unpleasant, sometimes gruesome aspects of his job.

On Saturday 5th December, 2009 Jacques was called upon to investigate a farm murder in the Ceres District.  Not only was the murder a particularly brutal one, the victim was a close friend.  The motive? Robbery.

There were absolutely no leads or clues at all.

In sorrow, anger at this tragic waste of a human life, and in desperation at the lack of information with which to proceed with the investigation, Jacques and his colleagues cried out to God for help, and He is faithful.

On the following Wednesday while Jacques was praying he was led to 1 Corinthians 4: 5 – …He will bring to light what is hidden in darkness and will expose the motives of men’s hearts…

Three days later, on Saturday 12th, one week after the murder, they had a breakthrough.  An informer gave them some critical information.  Within 7 days the four killers were positively identified and arrested.

This started Jacques thinking about starting a more formal prayer movement involving the police and the community, to pray for the Police themselves and against the growing crime in the Ceres District.  In May this year (2010) a close colleague of Jacques’, Vian van Wyk, gave his life to the Lord.

On 12th October this year (2010) Jacques, Vian and six other detectives spent a morning in prayer at the cross at the top of Michell’s Pass near Ceres.  While praying, Jacques was led to Joshua 1 verses 1 to 9:

After the death of Moses the servant of the LORD, the LORD said to Joshua son of Nun, Moses’ aide:

“Moses my servant is dead. Now then, you and all these people, get ready to cross the Jordan River into the land I am about to give to them—to the Israelites.  I will give you every place where you set your foot, as I promised Moses.  Your territory will extend from the desert to Lebanon, and from the great river, the Euphrates—all the Hittite country—to the Great Sea on the west.  No one will be able to stand up against you all the days of your life. As I was with Moses, so I will be with you; I will never leave you nor forsake you.

“Be strong and courageous, because you will lead these people to inherit the land I swore to their forefathers to give them.  Be strong and very courageous. Be careful to obey all the law my servant Moses gave you; do not turn from it to the right or to the left, that you may be successful wherever you go.  Do not let this Book of the Law depart from your mouth; meditate on it day and night, so that you may be careful to do everything written in it. Then you will be prosperous and successful.

“Have I not commanded you? Be strong and courageous. Do not be terrified; do not be discouraged, for the LORD your God will be with you wherever you go.”

Jacques said he knew God was speaking to him.  He shared the passage with the other members.  Vian confirmed  that he had just been given that exact same passage as well! While returning from the mountain where they prayed God laid it on Jacques’s heart to start something for the police at Ceres.

It was at this point that Jacques remembered reading an article in the June edition of the Joy Magazine about the tenth anniversary of the Rondebosch Police Station Prayer Group.  He contacted Tony Hoare, the founder and co-ordinator of the group, to ask him for some guidelines.  They spoke and Tony explained how the Rondebosch Group had started – first by his getting the approval of his Church Council, then by him contacting all the churches in the area and inviting them to participate, and finally by speaking to the Station Commissioner.  In the case of Rondebosch the Holy Spirit had clearly been busy, because the response had been uniformly enthusiastic!

Jacques promised to let Tony know when the inaugural meeting was to be held, and on 27th October Tony and his wife Anne drove out to Ceres from Cape Town to be there.  The meeting was attended by all but three of the 15 local pastors who have joined the initiative, and they had made their apologies because of prior commitments.  Also in attendance were a number of the Police Station members together with members of the community.

The meeting started with a short but powerful time of worship – there were some 20 people present but it sounded like 200! – followed by Jacques outlining his vision for ‘Operasie Bid vir die Polisie’.  Then followed a time of prayer.

“The police”, said Jacques, “ are the watchmen on the walls (Isaiah 62:6), and we need God’s intervention through the prayers of the community and our colleagues if we are to succeed in our battle against crime”.

He went on to say that the battle is not a physical but a spiritual one (Ephesians 6: 12) and it will only be won by constant and focussed prayer.  In addition, the police themselves need the spiritual support of the community given the pressures and temptations under which they operate.  He believes that God wants to put spiritual watchmen and women in place to pray for all of these needs.

The plan is to circulate specific prayer pointers to the participating churches.  A roster has been drawn up whereby the different churches will be responsible for the following:
1.    Prayer for the Police Station and the members;
2.    Intercession for breakthroughs in specific cases;
3.   Bringing the Word and prayer on Wednesday mornings at 08h00 in the policestation at Voortrekker Street Ceres.

Given the unity in the Body of Christ in Ceres we may well shortly be reading of revival in Ceres, not just in the police but in the town as well.

We as the Body of Christ must intercede daily for our policemen and women who are working under very dufficult conditions.

Now to him who is able to do immeasurably more than all we ask or imagine, according to his power that is at work within us, to him be glory in the church and in Christ Jesus throughout all generations, for ever and ever! Amen. (Ephesians 3: 21-22)

Postscript:  The reading for Tony Hoare’s daily devotions on 27th October (which he was only able to read that evening) was Haggai 2: 1 –9:
“…But now be strong, O Zerubbabel,’ declares the LORD. ‘Be strong, O Joshua son of Jehozadak, the high priest. Be strong, all you people of the land,’ declares the LORD, ‘and work. For I am with you,’ declares the LORD Almighty.  This is what I covenanted with you when you came out of Egypt. And my Spirit remains among you. Do not fear.”