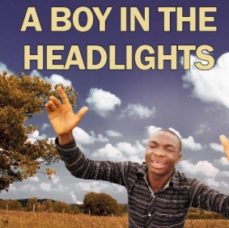 I switched off the generator and the lights strung between poles around the green canvas tent went out. I was plunged into darkness. Another African crusade had come to an end. The singing of a million crickets seemed to fill the night around me, reminding me of where I stood. I slowly walked toward the place where I had parked my car. I got in and started the engine, switching on the headlights, driving across an open field toward the dirt lane home. As I neared the edge of the field, suddenly a slight boy ran into my path. He waved his arms to flag me down.

The power of the Holy Spirit
I stopped and rolled down my window. “Is something wrong?” I asked. He would not come close to the window; I could see he wanted to be polite. It was part of his tribal heritage. “Please, Moruti Bonnke,” he said, using the title of respect, “I want you to lay hands on me and pray for me.”
A great weariness was on me. I had finished a vigorous sermon under a strong anointing. Many had come to the Lord. I had prayed for the sick. “How old are you, son?” “Seventeen,” he said. “I got saved in your crusade. Jesus has forgiven me all my sins. But I knew you would pass here, and I wanted to ask you to pray that I would receive the Holy Spirit before I return to my village. It is far away.”

The fruit of a life transformed
This request went to the heart of my call to Africa. My weariness lifted at once. I left the car running with the headlights on so that I could see what I was doing. “What is your name son?” I asked. “David” he replied. “Lord, according to the promise of Your Word, I ask that You fill David with Your Holy Spirit.” I laid my hands on his head.
He undulated like a bolt of lightning had run down his spine. Then he began to cry and praise God. This was a familiar sight to my eyes. After a few moments, I said good-bye to David.
Months later in Johannesburg, I began to hear reports of a revival that had broken out in the tribal region of the (then)Transvaal. When I asked who the preacher was, I was told that he was no preacher at all. Just a boy whom God was using greatly – it never entered my mind that David was that boy. A year later I returned for another week of meetings. One night after preaching I heard a knock at my door. I opened it, and there stood David. His face was beaming with joy. “After you prayed, I walked home. It was like walking on air. As I first saw my village, I noticed a woman leaving the kraal. She was carrying a bundle in her arms, and I thought that I could hear her crying. I knew this woman.
The week before I came to the ‘Christ for all Nations’ meeting, she had lost a child to black fever, she held out a bundle in her arms, and I could see that she carried her second child, a young boy. I could see that this child would soon die too. When I saw this woman I felt love come from me like I had never known. I could not contain it.”

Revival and healings
“It was against tribal rules but I asked her if I could pray for the sick child the way you had prayed for the sick people in the tent meeting. She said, ‘Yes, yes, anything, please.’ I laid my hands on the child, and I could feel the fire of the fever burning in his head. I asked God to take the fever from the child. Suddenly, he stopped crying.
The child sat up and said, ‘Mommy, I’m hungry. I’m thirsty.’ The mother was amazed. That woman’s eyes grew so large! She ran with the child to the village ahead of me. She went straight to the chief’s house. ‘David prayed for my child and healed him. Look the fever is gone.’
I went to my hut and began telling my family about your prayer for me, and about what had happened that morning. Suddenly, a runner came. He summoned me to an audience with the chief. I was afraid but the chief said to me, ‘David, I heard what you did for this mother. I have a daughter that no doctor can help. She is crippled. She was born with twisted limbs.’
He said, ‘I have taken her to the finest doctors in Cape Town, and they can do nothing. I have taken her to the witch doctors. Nothing has been able to help. Please go to her hut and pray for her as you prayed for this child today.’

Signs and wonders!
When we entered the hut, I saw a crippled girl lying there. Her legs were terribly twisted beneath her. Again, I felt that powerful love of Jesus coming from me toward her. I told her about Jesus. I told her that I could not do a miracle, but Jesus Christ could do what is impossible for us. So then, I laid my hands on her and started to pray.
As I began to pray we heard a popping and cracking sound. I did not know what it was at first, but then I saw that the girl’s legs were straightening out before our eyes. The woman who was with me screamed and ran from the hut to tell the whole village. She stood for the first time in her life, and walked with me from that hut.

A village comes to Christ
At that moment, the chief announced that he would host a week of meetings in the village. He sent runners to all the tribal villages, commanding them to come and hear the Gospel. I’ve been preaching and praying for the sick every day since then.”

A warning to all…
“You are the one,” I said. “David, I had no idea that you were the boy they have been telling me about. Reports are running all over South Africa that God has been using a boy to bring revival among the tribes. This is glorious.”
I would like to have ended this story here. But sadly, I have it from several reliable witnesses that David has left his tribal homeland in the north, and has lost himself in the impenetrable slums of Soweto. He does not fellowship with the people of God anymore, and he no longer walks with the Lord. The truth about David must surely contain some lesson that is more important than a feel-good ending.
This must serve as a warning to each of us. No matter how the power of God has been demonstrated in our lives, we can choose to walk away from fellowship with Him. “Let him who thinks he stands take heed that he does not fall”, the Scripture says.
Recently, I took a drive through Soweto. I was just driving, looking for David. Not that I expected to find him. That would be like finding the needle in the haystack. Still I drove with an ache in my heart, and as I drove, night fell. I thought to myself, what would I say if David suddenly appeared in the beams of my headlights? He would be forty-five years old. Would I even know him? How would I respond?
I would leap from the car and run to him, putting my arms around him. I would assure him that the love of God is the same today as it was on that dark night. He can begin again. And I would like to help him on that journey to restoration.
The Holy Spirit does not possess us. He honours our choices. But we must learn to follow His promptings. 