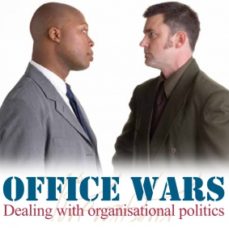 Office politics is an inevitable byproduct of our competitive nature and the humanistic view of Western society. The underlying value of capitalism (in
a fallen world) is to make a profit at all costs, while humanism values the individual as the highest priority. These twin values culminate in the egocentric motivation of self-interest, resulting in self-promoting behaviour of individuals in the workplace. We have all heard the sayings ‘every man
for himself ’ and ‘the survival of the fittest’. These commonly shared ideas represent the value of individualism in Western culture. Everyone is
concerned with his/her own agenda for self-actualisation. This plays out in the workplace where the competition for jobs, material goods and status is fierce.

Don’t play The ‘game’
Organisational politics is not usually a transparent endeavour. In fact it has a very subtle, subversive nature. Communication is indirect, meanings are ambiguous and only the ‘skilled’ are able to navigate their way through the maze. It is a common belief amongst employees that one has to
know how to ‘play the game’ in order to ‘get ahead’. The game is often characterised by competitive, manipulative, controlling, exploitative and self-serving relationships between employees. In addition, social awareness or organisational ‘savvy’ is regarded as an emotional intelligence competency needed to thrive in the present global workplace.
It is often argued that the most successful people not only understand the political game, but are quite adept at playing it to their advantage. In games there are always winners and losers, and usually the skilled players have no concern for the weaker players. Competition is the highest value and winning is sought at any cost. There are ample examples of the casualties of organisational wars. These are the disillusioned employees who have been ‘burnt’ and have lost all their trust in others. They almost always say that they hate company politics and want nothing to do with it – whilst the ‘winners’ see them as losers who just didn’t have the skill to play the game well enough. Respect for the other has been compromised both ways.

Loving others
The above scenario excludes the basic premise of Christianity i.e. to love other people as oneself (Lev 19:18; Mat 19:19) and behave according to the fruit of the Spirit (Gal 5:22), seeking each other’s well being before thinking of your own needs. Our attitude towards others should be to serve each other (Gal 5:13) and not to harm another in any way whatsoever (Rom 13:10; Rom 15:2). This Biblical attitude would result in fairness and overt, honest behaviour in the workplace (Eph 4:25). God also tells us that we should serve wholeheartedly as if we were serving Him (Eph 6:7).
Our work motive should be higher than mere self-interest. We should realise that promotion comes from God, and all we have to do is to work as if doing it for Him. Christians should also not constantly compare themselves to others as this leads to envy and is against God’s Will for us (Ps 49:16-17).
Paul, in his first letter to the Thessalonians, warned against impure motives, greed and flattery. “For the appeal we make does not spring from error or impure motives, nor are we trying to trick you. On the contrary, we are speaking as men approved by God to be entrusted by the Gospel. We are not trying to please men but God, who tests our hearts. You know we never used flattery, nor did we put on a mask to cover up greed – God is our witness.” 1 Thess 2: 3-5

The battlefield
Christians who find themselves on the ‘battlefield’ of the political game in the office can use the following guidelines:
• Search your behaviour for selfish motives and a selfpromoting agenda.
• Don’t use manipulation as a means to get your own way; it devalues another person as an object to be used for self gain.
• Refrain from using flattery, coercion or control in relationships with co-workers.
• Practice serving the other instead of promoting the self.
• Be direct, transparent and honest in your communication.
• Refuse to gossip and join coalitions with other co-workers that exploit or disrespect fellow employees.
• Never compromise on your Christian values just to get ahead – believe God for promotion in His time and according to His Will.

Our general attitude should be according to 1 Peter 2:17: “Show proper respect to everyone: Love the brotherhood of believers, fear God and honour the king.” This is a good guideline for Christian attitude and behaviour in the workplace.

Roché Snyman is a Psychologist and Business Coach, who serves as subject head for Industrial Psychology at the Institute of Christian Psychology. For more information on Christian
Psychology, or for professional advice, please contact 011 827 0209
/ 7611. See www.icp.org.za