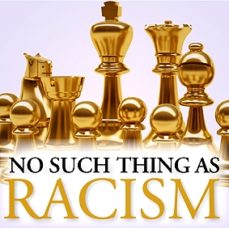 No Such Thing As Racism
Recently a newspaper ran an article about an East Indian man who took action against a Korean cab driver for his alleged racism. Soon after, this paper published another article asking the question “Is Racism Serious Here?”, which has kept Westerners busy on their forums and blogs ‘discussing’ this issue. Most responses were too one-sided, painting the Korean people as racists in a very broad stroke, while making it clear that the foreigners were innocent of any wrong doing.
These contributors to those websites were about as racist (secular definition) as they claimed the Koreans were and they did not care if they condemned innocent people, just as long as they looked good and the Korean nation didn’t. Whenever someone is treated in a manner they disapprove of, we always hear the complaints of discrimination, prejudice, etc.

WHAT IS RACISM?
Racism is always implied because the colour of the skin of the participants is different from each other, not because the act was really racist. Never do we hear how the encounter was a misunderstanding or committed out of preference, it is always the label which draws the largest emotional response.
What truly is racism? In today’s world where definitions get distorted, or blurred due to the unwillingness of many, it is a proper question to ask – to know what a racist act is. The Oxford Dictionary defines the word as: “the unfair treatment of people who belong to another race” or “violent behaviour towards them”.

NOT FOUR RACES BUT ONES
But this definition leaves us with a problem. It is too general and too broad to definitively set any boundaries. What people decide racism is, is what it will be, regardless if they are correct or not. Thus in reality even the shaking of a fist at someone with a different colour could be considered racism.
That is incorrect because then there is no real standard to apply to determine what is or isn’t a racist act and no judge could punish people for being racist since the standard is as changeable as the people who define it. So we turn to the Bible for an answer and within its pages we read, “all men have descended from Adam” which tells us that there are not four races as proposed by some, but only one.

DNA RESEARCH AND THE BIBLE
With this information we know that there is no such thing as racism because everyone is part of the same human race. Which makes more sense as the odds of producing one race by chance are astronomical, but to get four compatible ones whose only real difference is skin colour, is beyond calculation and impossible to achieve. Surprisingly, secular science is finding out through its research with DNA that the Bible is correct. Here are a few relevant quotes:

“Race is a social concept, not a scientific one,” said Dr. J. Craig Venter, head of the Celera Genomics Corp.
According to Craig Venter, “The Human Genome Project shows there is no such thing as race.”
“It’s an old-fashioned sentiment. Who speaks of ‘racial stocks’ anymore? After all, to do so would be to speak of something that many scientists say does not exist.”
“The billions of pieces of human genetic code sequenced thus far are most notable for what they do not appear to contain – a genetic test to tell one race of people from another. All scientific finds point to the conclusion that race doesn’t exist”.

This research confirms that the Bible is correct and there is no such thing as racism, just hatred for others and that is sin. People create false labels so they can extract their version of how people should live and that is wrong. “There is neither Jew nor Greek, slave nor free, male nor female, for you are all one in Christ Jesus.” Gal 3:28