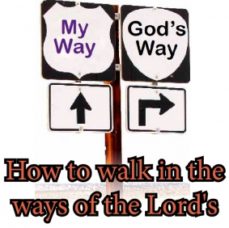 It’s the start of another year. Perhaps we should number it 2008 PC – the year two thousand and eight, Post Crash! The end of last year was a dark time for our share prices, property values, interest rates, rand value and inflation rate. When the smoke clears away from the rubble of our fallen financial edifices, we will no doubt realise that the whole towering financial system was built on flawed foundations. Kingdom of God finances stand on the principles of earning before spending and creating before consuming. However, the financial foundation of the kingdom of this world is to borrow and spend today in the hope that tomorrow we will be able to borrow and spend even more! But, Romans 13:8 reads, “Owe nothing to anyone – except for your obligation to love one another” (NLT). With hindsight, it seems like the world went down a wrong path and hit a brick wall in 2008.

His thoughts are superior
Proverbs 14:12 reads, “There is a way that seems right to man, but in the end it leads to death” (NIV). It makes two points that we should ponder carefully as we go into 2009. The first is that our ways are seldom God’s ways, and the second is that we need to carefully consider the destination to which our paths lead. Isaiah 55:8 states the first point in stark terms: “For My thoughts are not your thoughts, neither are your ways, My ways, declares the Lord.” We can’t deny the evidential Truth of this. Jesus chooses two men, Paul and Barnabas, to reach the Gentile world – our way would probably be mass rallies and crusades, TV campaigns and the like. Jesus taught that to get much we need to give much – we say that to get much, borrow much!

Renew your mind
Why is it that we so often find ourselves going down our own way, rather than God’s way? I don’t think it’s because we don’t want God’s way, or that we don’t pray or read the Bible enough. I think the prime reason is that we just don’t understand God’s ways. His ways are so different to what we are accustomed, what we have been taught through the educational system and what we see modelled all around us. We need to be “transformed by the renewing of your mind” Rom 12:2. But how do we do this? How do we reform our mindsets? At the risk of over simplifying, I suggest a three step process.

Step One:
Don’t live contrary to the Word
Stop thinking and doing what we already know to be contrary to God’s way. “Now reform your ways and your actions and obey the Lord your God” Jer 26:13. How can we walk down God’s way if we are consciously walking down another path?

Step Two:
Seek the Lord’s way
Seek God’s way with wholehearted attention. Obviously this entails reading the Bible, but it means more. To seek His ways means that we must diligently study, meditate on and practise the words and deeds of the Lord Jesus Christ. God walked this earth, He struck a path through time, He showed us the way and He caused this way to be recorded in Scripture for us. His way is not just a set of values or doctrines, but an ongoing and vital relationship with Himself, for Jesus said, “I am the Way…” John 14:6. Before the early disciples were called Christians, they were known as the ‘People of the Way’. That’s what we should be today; people of His Way.

Step Three:
Repent and change
Having repented of known error in our ways, and having steeped ourselves in the life of Jesus, we need to walk with wholehearted trust down God’s way in our lives. “Trust in the Lord with all your heart and lean not on your own understanding; in all your ways acknowledge Him and He shall direct your paths” Prov 3:5-6. Oh dear, I have just run out of column space – I have exceeded my allotted words and I don’t have room to deal with the second point that Proverbs 14:12 makes. Until next time, may God bless you in 2009, may He make His Way clear to us and may we walk in it.

Dr christopher peppler Lead elder of the Village Church, Lonehill, Founder and Chairman of SA Thelogical Seminary. He has authored several books, namely ‘Truth is The Word’ and ‘Revelation in the Stars’. To find out more or to order his books, please see: www.chrispy.co.za