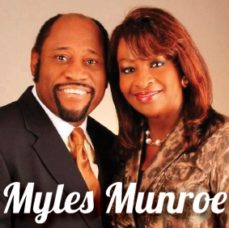 At the end of last year, Dr Myles Munroe, 60, and his wife Ruth, together with several other ministry aides, died tragically in an aeroplane accident. The news shocked the Christian world, and though we mourn their passing, we rejoice in the legacy he left on earth, and the fruit of his life’s purpose, that will continue to blossom in many people’s hearts for years to come.

Prepared for greatness
Curiously, before his plane went down, Dr Myles had previously had a dream about leadership transitions he believed he would see in the Bahamas.
In the dream, a track and field athlete was lying in his coffin, clutching a baton. After he awoke, Munroe said he understood the message of the dream: “It was about people dying with a baton, instead of passing it on. I was thinking, the young person who’s supposed to lead next, has to go to the casket, pry the baton out of the dead man’s hand  just to take it to the next leg. Great leaders pass [the baton] on before they die, and they live to see the other person run. Hopefully, we will get to see that in the Bahamas.”
Soon after the news of his death broke, tributes poured in from leaders around the world, including presidents.
His presence is still missed, but his legacy continues to be remembered. Below is a tribute by his publisher and friend, Steven Strang, who offers some insight into this influential leader:
Five lessons Myles taught me
“I knew and admired Myles since we first met at Oral Roberts University, in the 1980s. He was a recent grad, but his Bahamas Faith Ministries International, which he founded only a short time earlier, already had become successful. Over the years, I brought him in as a consultant for our media company, published several of his many books (three are still in print), had him as a guest in my home, visited his church on numerous occasions in the Bahamas and spent hours talking about the things of God.Here’s what I learned from Myles before he was tragically taken from us:

1. He loved his wife, Ruth
Theirs was an example of a healthy Christian marriage. One of the first times I heard him speak, he called her to the podium and told the audience how beautiful, smart and beloved she was.
Myles and Ruth seemed to have a wonderful marriage, during the three decades I knew them. How sad that they died together in this crash.

2. He was passionate about leadership and transition
Ironically, Myles was on his way to a conference talking about that very subject when the plane went down. I remember a meal we had together, where we talked about how to pick a successor like Jesus.
I had never really given any thought to who Jesus’ successor would be, because Jesus is alive. But as a successor on earth, I suppose I would have said Paul. But Myles said Jesus’ successor was Peter – the one on whom Christ built His Church. Myles said Jesus asked Peter: “Do you love me?” Always pick someone who loves you to succeed you, he said. Otherwise, your successor will beat your life’s work into the ground – something I’ve never forgotten.

3. He influenced others
Myles brought unity, by founding the International Third World Leaders Association; he was well known and respected by the highest levels of leadership in the Bahamas [and even had a state funeral – the highest honour].

4. He was a great communicator
Not only did he write more than 40 books, but he also was sought after internationally, as a speaker. And when he spoke, he held the audience’s attention for long periods of time.

5. Myles was a deep thinker
He was a keen thinker, with deep insights. He taught on leadership in practical ways. He emphasised “knowing your purpose” in sermons and several books.
As a Bahamian, Myles was used to a system that respected the role of the King and Queen and the way the population was subject to them. He felt that Westerners sometimes felt the church was a democracy – like their governments. It’s not – it’s a Kingdom and Jesus is King.

The legacy lives on
Please pray for the family he left behind. Imagine the horror of losing not one but two family members in this tragedy. And his ministry must move on, too. The people must be reeling from shock and grief, although Myles Munroe left a firm foundation. He left leaders in place.
I believe his ministry will go on. His influence will continue for years to come, due to the many books he left behind, as well as his teaching videos, but mostly by the thousands and perhaps millions he influenced in a very deep way, including me.

A touching tribute from one of Myle’s Munroe’s spiritual sons
“Dear friends, thank you for all the messages and calls over the last few days. I am humbled to read that, in some way or another, you associated me with my parents in the faith, Papa Myles and Mama Ruth.
The last few days have been very hard for me, and I cannot even imagine how the family of all the victims must feel. My heart goes out to every single one of them. I have been searching for answers and did a lot of reflecting over the last few days.

Papa Myles, a mentor in the faith
The first time I saw Dr Munroe speak in public, was in October 1998 in South Africa  at a local church, where he taught on ‘Discovering Your Personal Leadership’. Little did I know that destiny would pull me to the Bahamas, Dr Munroe’s home, eight years later.
The bank I worked for in Switzerland asked me if I would relocate to their office in the Bahamas. Needless to say, I did so in June 2007, and one of the very first questions I had when I arrived in the tiny island nation was, “Where is Dr Myles Munroe?”
That was the beginning of a relationship that significantly shaped the purpose of my life.
Over the last seven years, I was privileged to spend extremely valuable time with a man that was an example in all spheres of life. I remember our trip through Africa, last year; the mentoring times in his study; the last lunch we spent together, enjoying our favourite fish; the last flight we spontaneously took to Canada and, finally, his last email to me on Friday, 7 November (two days before his passing), ending with “Love you son, Papa”.
I realise now, that he did everything he had to do, said everything he had to say and wrote everything he had to write.

A glorious homecoming
A very close friend of mine wrote me the following on Sunday night:  “We’re all afforded a blank mosaic to paint of what we’d like our lives to be. Albeit Mr Munroe’s tragedy – he has painted a masterpiece.”
I went back to my emails from January this year and read again what Dr Myles believed the theme of 2014, the year he went to be with the Lord, to be. Here’s what he wrote:
“2014 brings us into a year of a season of fulfilment, completion and perfecting of our goals, desires and plans in the Kingdom of God.”
This year was HIS year of fulfilment, completion and perfection of a life dedicated to serving others. His departure was of epic proportions. In the twinkling of an eye he left this world, together with his wife and soulmate whom he loved so much, as well as with the other extraordinary leaders and friends he cared about, who were on the plane. No pain, no suffering. A glorious homecoming after a glorious, victorious life.
In her last email to me, just days before the accident, Mama Ruth wrote: “I am sure only time will tell the impact of the Kingdom message on the persons who have heard it.”
Dr Myles and Mrs Ruth Munroe finished their race and kept their faith, they transformed thousands of followers all around the globe, especially from the third world, into leaders.
I am convinced that these new leaders will continue to shape the world and their countries. They will continue the legacy. The race is not over. A new lap is starting.
Last, but not least, I wish to thank the people of The Bahamas, for allowing me to share these profound 7 years with this extraordinary Bahamian leader. And finally, I wish to thank Chairo and Charisa Munroe, for sharing their mom and dad with me and the rest of the world.”

Remembering a couple passionate about Jesus
Myles and Ruth Munroe, and their ministry, have been our long-time friends for well over 35 years. Dr Munroe was a man of the Word of God, a strong and gifted leader in the Body of Christ, with an anointing to minister to ministers and teach and train leaders to be leaders in Christ Jesus, in the things of God, and in the victory that we have in Jesus Christ. His lovely wife, Ruth, was  an equally powerful minister of the Gospel.
Of course they will be missed. And, of course we miss the strength that God placed in them. But, we don’t mourn their passing; Scripture says sorrow not, for we are not a people without hope. We know, beyond a shadow of any doubt, that Myles and Ruth Munroe just stepped into the presence of Jesus, and thanks be unto God, He always gives us victory over death. He bought it, He paid for it and it is ours!
Their ministry, Bahamas Faith Ministries International Fellowship, will not diminish. It will not go away. It is strong in the Lord and in the power of His might. It will continue. It will grow. It will continue to preach the Gospel. And all of the leaders that this man of God has taught and trained in the Body of Christ, and in businesses and Christian enterprises all over the world, will continue to reflect the Good News of Jesus Christ, because of the richness of Dr Myles Munroe’s spirit and his strength and integrity here on this earth.
We’re blessed to have had them among us for these many years. It won’t be long until we see them again. Soon, Jesus is returning, and forevermore, we will be with Him.
In closing, I remind you of Hebrews 2:9: “But we see Jesus, who was made a little lower than the angels for the suffering of death, crowned with glory and honour; that he by the grace of God should taste death for every man.”
We take great comfort in these words. – Kenneth Copeland