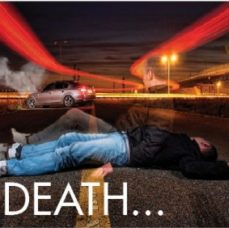 DO WE HAVE AN APPOINTED TIME OF DEATH?

The Bible tells us that “all the days ordained for me were written in your book before one of them came to be” Psalm 139:16. So, yes, God knows exactly when, where, and how we will die. God knows absolutely everything about us.
Is our fate sealed?

Live each day for God
A person who dies of a heart attack due to a lifetime of extremely unhealthy eating and little exercise would not have died in the same way, or at the same time, if he had eaten healthier foods and exercised more.
Yes, our own decisions have an undeniable impact on the manner, timing, and place of our death.

How does this affect our lives practically? We are to live each day for God. James 4:13-15 teaches us, “Now listen, you who say, ‘Today or tomorrow we will go to this or that city, spend a year there, carry on business and make money.’ Why, you do not even know what will happen tomorrow. What is your life? You are a mist that appears for a little while and then vanishes. Instead, you ought to say, ‘If it is the Lord’s will, we will live and do this or that.’”
We are to make wise decisions about how we live our lives and how we take care of ourselves. And ultimately, we trust God that He is sovereign and in control of all things.

Where will you spend eternity?
The free gift of eternal life is available to all. “Whoever believes in the Son has eternal life, but whoever rejects the Son will not see life, for God’s wrath remains on him.” John 3:36. We will not be given the opportunity to accept God’s gift of salvation after death.

Our eternal destination is determined in our earthly lifetimes by our reception or rejection of Jesus Christ. “I tell you, now is the time of God’s favour, now is the day of salvation.” 2 Cor 6:2.

A wonderful eternal life
If we trust the death of Jesus Christ as the full payment for our sin against God, we are guaranteed not only a meaningful life on earth, but also eternal life after death, in the glorious presence of Christ.  If you have not surrendered your life to Jesus, do so now!

WHAT DOES THE BIBLE SAY ABOUT OUT OF BODY EXPERIENCES?

The Bible is the final authority
We need to be extremely careful in how we validate our experiences. The most important test of any experience is comparing it with the Bible. Satan is ready to cause deception and twist people’s thinking.
“But I am not surprised! Even Satan can disguise himself as an angel of light. So it is no wonder his servants can also do it by pretending to be godly ministers. In the end they will get every bit of punishment their wicked deeds deserve.” 2 Cor 11:14-15.

NOTE FROM JOY! MAGAZINE
It is interesting that when Paul was caught up to the third Heaven, he was forbidden to reveal to the Corinthian’s what he experienced (2 Cor. 12:1-9). Since God forbade an Apostle of Christ to discuss his vision of the afterlife, one wonders why/if would He allow other believers or non-Christians today to see, hear and discuss the same things.
We read many examples in the Bible of people being raised from the dead (1 Kgs 17:17-24; 2 Kgs 4:31-37; 13:20-21; Matt 27:52-53; Luke 7:11-17; 8:49-56; Acts 9:36-43; 20:9-12). What is notable about these accounts is not one of them describes the goings on of the afterlife.
Having said that, we cannot judge the validity of another person’s testimony – particularly if it aligns with Scriptural descriptions of Heaven/hell. Many people have been led to salvation from reading about NDE’s and visions (eg: 23 Minutes in Hell by pastor Bill Wiese).
We urge you to use discernment, Biblical Revelation is extremely dangerous.

WHAT ABOUT SOUL SLEEP?

Soul sleep is a belief that after a person dies, his/her soul “sleeps” until the Resurrection and final Judgement. The concept of “soul sleep” is not Biblical. When the Bible describes a person “sleeping” in relation to death (Luke 8:52;
1 Cor 15:6), it does not mean literal sleep. Sleeping is just a way to describe death because a dead body appears to be asleep.

Our eternal destinations
Until the final Resurrection, though, there is a temporary Heaven – Paradise (Luke 23:43; 2 Cor 12:4) and a temporary hell – Hades (Revelation 1:18; 20:13-14). As can be clearly seen in Luke 16:19-31, neither in paradise nor in Hades are people sleeping. It could be said, though, that a person’s body is “sleeping” while his soul is in Paradise or Hades.

At the Resurrection, this body is “awakened” and transformed into the everlasting body a person will possess for eternity, whether in Heaven or hell. Those who were in Paradise will be sent to the new Heavens and new earth (Rev 21:1). Those who were in Hades will be thrown into the lake of fire (Rev 20:11-15). These are the final, eternal destinations of all people – based entirely on whether or not a person trusted in Jesus Christ for salvation.

WHERE DID OLD TESTAMENT BELIEVERS GO WHEN THEY DIED- PARADISE OR HADES?

Before Jesus’ Resurrection…
Prior to Christ’s Resurrection, Luke 16:19-31 shows Hades to be divided into two realms: a place of comfort where Lazarus was (Heaven) and a place of torment where the rich man was (hell).

Lazarus’s place of comfort is elsewhere called Paradise (Luke 23:43). The rich man’s place of torment is called Gehenna in Mark 9:45. Between Paradise and Gehenna (the two districts of Hades) there was “a great gulf fixed.” Luke 16:26. Jesus is described as having descended into Hades after His death (Acts 2:27, Eph 4:9).

Unbelievers will face the Great White Throne
At the Resurrection of Jesus Christ, it seems that the believers in Hades (the occupants of Paradise) were moved to another location. Now, Paradise is above rather than below (2 Cor 12:2-4). Today, when a believer dies, he is “present with the Lord.” 2 Cor 5:6-9.

When an unbeliever dies, he follows the Old Testament unbelievers to the torment side of Hades. At the final Judgement, Hades will be emptied before the Great White Throne, where its occupants will be judged prior to entering the lake of fire. “The lake of fire is the second death. Anyone whose name was not found written in the Book of Life was thrown into the lake of fire.” Rev 20:14-15.

Believers will face a separate judgement
Romans 14:10-12 says, “For we will all stand before God’s judgement seat…so then, each of us will give an account of himself to God.”
2 Corinthians 5:10 tells us: “For we must all appear before the judgement seat of Christ, that each one may receive what is due him for the things done while in the body, whether good or bad.” In the context, it is clear that both Scriptures are referring to Christians, not unbelievers.

The concept of reincarnation is completely without foundation in the Bible, which clearly tells us in Hebrews 9:27 that “we die once and then face judgement.” The Bible never mentions people having a second chance at life by coming back as different people or animals. Jesus told the criminal on the Cross: “Today you will be with Me in Paradise.” Luke 23:43. He did not say: “You will have another chance to live a life on this earth.”

Reincarnation has been a popular belief for thousands of years, but has never been accepted by Christians because it is contradictory to Scripture.
The one passage that some point to as evidence for reincarnation is Matthew 17:10-12 which links John with Elijah. However, the passage does not say that John the Baptist was Elijah reincarnated, but that he would have fulfilled the prophecy of Elijah’s coming if the people had believed his words and thereby believed in Jesus as the Messiah.
The people specifically asked John the Baptist if he was Elijah, and he said: “No, I am not.” John 1:21.

Our lives are temporary
Passages such as James 4:14, which discusses the temporal nature of human life are inconsistent with a reincarnationist idea of living earthly lives over and over for centuries, millennia, or all eternity.

On top of all this, if human souls were reincarnated over and over, then how could some people in the Bible see the spirits of long dead people, like Moses being seen by the Apostles in Matthew 17:3 during the Transfiguration of Christ?
Belief in reincarnation is an ancient phenomenon and is a central principle within the majority of Indian religious traditions, such as Hinduism, Sikhism, and Jainism. Many modern pagans also believe in reincarnation as do some New Age movements and those who practise spiritism.

WHAT ABOUT PEOPLE WHO REMEMBER PAST LIVES?

The first and perhaps most important question we should ask is whether or not these ‘memories’ are genuine.
Human memory is notoriously unreliable (just ask any lawyer or detective), and people frequently mis-remember events, believing they remember things that never actually happened.

Mistaking memories
In the case of those claiming to remember their past lives, one can easily imagine them mis-remembering images from TV shows or movies, mental fantasies from books they read years earlier, or mistaking dreams for genuine memories.

While some modern “past-life experts” claim to find evidence for reincarnation by connecting things like phobias and physical ailments in currently living people with traumatic events in past lives, the past-life “experts” are assuming the existence of a past-life (or past-lives) in explaining current health problems, not showing that those past lives actually happened.

Who do you believe?
The fact of the matter is that there is simply no solid, scientifically acceptable evidence that the memories of past lives claimed by some people are genuine, rather than mis-remembered events or simply make-believe. Ultimately, the question comes down to whether we will find truth in the unreliable minds and memories of fallen and fallible human beings or from the timeless, holy, Word of God.
Christians can confidently assert that reincarnation is not a possibility for the human soul; when this life ends, our eternity in the afterlife begins.