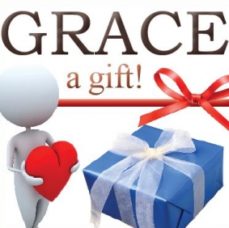 Many Christians have heard the word ‘grace’ but are clueless as to its Biblical meaning.
Following are some thoughts based on Scripture to help produce a balanced view of the subject:
1. Grace means ‘present’ or ‘gift’
As is commonly understood by almost all people today, a gift is something that cannot be earned. If it is earned it will cease to be a gift and would therefore be a reward or wages of some kind. There is nothing that can be done to earn God’s grace.
2. Grace is not a pretext to sin
The point of the initial verses of Romans 6 is to promote the power and immutability of grace in relation to sin. God and His grace will not be fooled by those who wish to use His holy grace as an excuse to continue or even increase sinful ideas, attitudes, actions, goals and relationships. Grace is about victory over sin, and mercy if failure occurs. It is not a license to mock God’s Holiness. See Jude:1:4.
3. Grace can be prevented
Grace can be prevented. Jonah 2:8 says that those who worship idols forfeit the grace that could be theirs. When we worship God (added) grace is our portion. However, if we choose to worship idols, then we can prevent the grace that could possibly be ours.
4. Grace can be seen as potential (powerful) possibilities
Based on Jonah 2:8 as well, grace does not only refer to the power of the present, but also to the possibility of the future.
Without God’s grace, our future is robbed of any powerful manifestations of His grace.
5. Grace is often associated with power
In Acts 6:8, grace and power were often sibling causes of the Apostles’ effectiveness with grace functioning as the necessary predecessor. Without grace there will be no power and if you have some type of power, it is an expression of God’s grace.
6. Grace is associated with provision
Acts 4:32-37 records the event where believers sold their possessions and left them to the administration of the Apostles. It is important to note, however, that every need was met in the new fledgling community of faith. That’s because God’s grace provides.
7. Grace can be proved
Acts 11:19-30 tells the story of revival breaking out in Antioch. The Messianic Jews were still unsure if Gentiles could be saved, so they sent Barnabas. He saw evidence of the grace of God. What exactly was it that he saw? He observed the true work of salvation as it changes and transforms people into faith and love filled devotees of Jesus. Refer to Acts 15:11 as well.
8. Grace must be accompanied by our perseverance
Grace is a 100% a God-originated idea and action. Perseverance is 100% our responsibility. In Acts 13:43 Paul and Barnabas urge new believers to continue (make it a constant state of being and reception) in the grace of God.
9. Grace needs faith
Grace’s pathway to the salvation experience is faith. Romans 5:1-2 declares that we are activated into a gracious eternal relationship with God, by a faith response to the justification and righteous cleansing ability of the crucified and resurrected Jesus. It is a mouthful, but it simply means that we are saved by faith into a (salvation) grace.
10. Grace is proportional
Romans 6:1-2 says that as sin increases so does the effect of grace increase to meet the challenge to our salvation. Whatever the need may be, God’s grace is sufficient.
11. Grace is presence
In its fullest and purest meaning, grace is the honour of having something honourable and/or more valuable associated with your person, such as, the presence of God. That’s why we can sometimes say that a person may grace us with his/her presence.
12. Grace determines our proficiency
Romans 12:1-8 is clear that we all function in the Body of Christ according to the grace gift that God has given us. Therefore, as we do the grace of our gift, whether it is leadership or showing mercy, we should do so cheerfully because it is God’s gift to us to bless others with. If we do the action with the wrong attitude, the blessing might be lost and the grace of God made ineffective.
13. Grace produces a precipitate
1 Corinthians 15:9-11 says that the grace of God produced an effect of good old-fashioned work ethic in the ministry of extending God’s Kingdom. The precipitate from our lives should be a hard work ethic because of the grace of God and not a magical misunderstanding concerning the Lord’s grace to accomplish what He has empowered and called us to do.
14. Grace is perplexing
Even though we try and wrap our finite minds around Biblical concepts such as this, there is an element of mystery associated with many of them. Grace is no different. It is also an expression of God’s Sovereign Will. Therefore He is able to tell Paul in 2 Corinthians 12:1-10 that His grace is sufficient even without removing the thorn in his flesh. It’s like having a testimony of God providentially supplying you with petrol when you had no money or access to fuel. A greater testimony would be if you never got the fuel but the car still drove three hundred kilometres and got you where need to be without any fuel in it! 

PETER CORNELIUS is the Pastor of Seaview Baptist Church.  For more info:  pjcornelius7@telkomsa.net