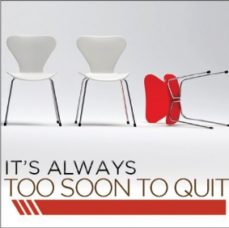 One of the largest organisations in the world is the Quitter’s Club. The reason you’ve never heard of the Quitter’s Club is because they never meet – the members quit coming. There are no dues – the members quit paying them. The Quitter’s Club is comprised of people who faced a tough job, a tough marriage, a tough sickness, or a tough failure – and they quit. When the going gets tough, the tough get going. But the going gets tough, the quitters get going…away. What we need in this world and in the church are people who will exhibit good, old-fashioned grit and doggedness.

Years ago a certain Mr. Darby, a wealthy insurance broker, was caught up with gold fever and headed out to Colorado. He did some prospecting and discovered a very rich vein of gold in the Rockies. He returned to his home on the East Coast and convinced all his friends to invest their money in a mining venture. They formed a corporation, bought a great deal of equipment, and mined this very wealthy vein of gold ore in Colorado.

About the time that corporation paid off all its debts, the vein of gold ran out. The investors kept digging until they ran themselves into debt again. Finally, one day, a discouraged Mr. Darby ordered an end to the excavation. He closed the mine, went into Denver, and sold the mine and equipment to a junk dealer for a few hundred dollars. Mr. Darby headed home.

The junk dealer hired a geologist to study the mine and the area. The geologist came back with a report: “If you dig three feet past the point where Mr. Darby quit, you’ll find the same vein of gold.” The junk dealer became the wealthiest mine owner in the state of Colorado. Just three more feet! I wonder how many times we too, stop three feet short of victory?


…FOR THE FULL ARTICLE, GET YOUR COPY OF JOY! TODAY!