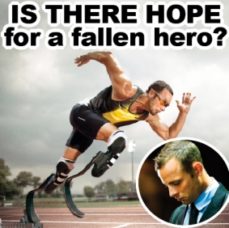 The term ‘underdog’ is often used in sports. It originated in the 19th Century, a time when dogfights were a spectator sport in America and Great Britain.
Back then, the winning dog was referred to as the ‘top dog.’ The losing dog was
typically on the bottom during the match and tagged the ‘under dog.’ Today the term is so widespread in the English-speaking world that it is simply one word: underdog.
Our fallen hero
Recently, international news has been filled with the tragic story of South African paralympian Oscar Pistorious, who is being charged with the murder of his girlfriend.
In America, Lance Armstrong’s at-tempt to come-clean by announcing to a world-wide audience with Oprah Winfrey that he had indeed been using sports enhancing drugs, while vehemently denying the accusations for years, was
received with bitter disappointment.
Against all odds
Here we have two underdog-types. Armstrong was diagnosed with cancer and defeated the disease, prompting him to start Livestrong Foundation and raise millions of dollars and awareness toward the prevention of cancer and other diseases humans face. And the world loved him for it.
In Pistorious we have the ultimate underdog story. Oscar’s legs were amputated below the knee at just eleven months old. Overcoming his physical limitations and public perception, he competed in several sports as a youth in his hometown. As he grew older and focused his athletic ability on the track field, through the aid of prosthetics specially fitted for him, the ‘Blade Runner’ exploded into the 2012 London Olympics competing against the world’s fastest able-bodied athletes. The world immediately gravitated toward rooting for this young man.

A life in the spotlight
Being in the public eye with such intense scrutiny is something neither Armstrong nor Pistorious would have wanted. For the former, the desire to win-at-all-costs drove Armstrong to misuse the gifts, platform and influence God gave to him.
The jury is still out on Pistorious’  trial. Yet as the story of his life begins to unfold, we begin to get a clearer understanding into the mind of those who have had to fight back from extreme circumstances and the environments in which they were birthed and lived in.
I can’t begin to understand all of the factors in this tragic story and I will not try to interpret them. But what I can offer is a great perspective for the rest of us on how underdogs can make comebacks.

Making a comeback
If you’ve ever made bad choices in your personal or professional life, the great news is that it is not over. There’s still hope and a way back. You may not get back to where you once were at the speed you desire.
Additionally, you may end up in a totally different and unexpected place.
But I believe that the greatest factor to making a comeback (which automatically qualifies you as an underdog), is sincere repentance before God. Scripture tells us that it is God’s kindness that leads us to repentance (Romans 2:4). When we humble ourselves before Him, we not only receive forgiveness but we place ourselves back on the right track to making a comeback.

Alter your thinking
It begins with our behaviour and the way we think. The way we operate after the mistake makes all the difference. We can relate our failures to the burying of the talents (the parable told by Jesus in Matthew 25:14-30) where one servant multiplied the money and gift given to him, whilst the other buried it.
To take it one step further, the misuse and reckless behaviour of the use of those talents has consequences as well. In the end, we can lose it and it can and will be given to someone else. An opportunity meant for you can be passed on to someone else.
Repentance
As we learn and reflect on the anatomy of our mistakes and then focus on the process of our comeback, the Lord will restore us in different ways. King David cried out to the Lord to restore him (Psalm 51:12) after his greatest failure. And God did restore him.
Additionally, David asked the Lord to “make me willing to obey You” and to “renew a right spirit within me.”  We will do well to follow David’s repentance and his plan for restoration.
Ultimately, one day, our highest hope is to hear the greatest affirmation from the Lord, recorded in Matthew 25:21: “Well done, good and faithful servant! You have been faithful with a few things; I will put you in charge of many things. Come and share your Master’s happiness!”
Every human on this earth has potential to be all they were created for, but for one reason or another, either fails to attain it or, they become all that the Lord created them to be. Potential is always there.
Becoming all God intended
So what’s your potential? What can you do with the life you’ve been given, whether it’s one, two or five talents? Because it doesn’t matter what you’ve been given. What matters is what you do with what you’ve got. Faithfulness, stewardship, multiplication… That’s the ‘pound for pound’ principle.

Be a champion!
No matter your current circumstance, use the talents and gifts God has given you to be the best in your ‘weight class.’ Start right where you are. Do the very best with what He has given you and you will achieve and become the best version of you in this season.
My prayer is that whether you are a pastor, businessperson, leader, housewife, student, non-profit founder, almost anyone – you’ll be inspired to take what you have and use it to your best ability.
And, remember this: all the defeats, trials, and frustrations you have endured, all of it, has been the Lord’s way of increasing your capacity and ability to handle exactly what’s in front of you. You’re not an underdog, you can be God’s champion. 

By: Mike Kai, founding pastor of Hope Chapel West Oahu in Hawaii and author of ‘The Pound for Pound Principle: Becoming All God Designed You to Be’ (Authentic Publishers) – available for purchase from www.koorong.com.au