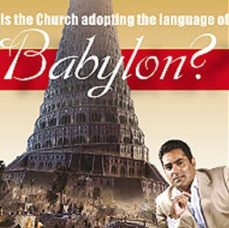 Is The Church Speaking The Language of Babylon?

Somebody once commented that the Church has almost become indistinguishable from the world. In many cases this is true. The very essence of the Ecclesia, ‘The called out ones’, is that we should be distinct in our conduct, speech and philosophy of life. In many areas the Church simply mimics the world by developing ‘Christian’ versions of music, plays, or television shows. However, the Church of Jesus Christ is an original institution with its blueprint in Heaven and it was birthed in the earth to bring spiritual and physical transformation to mankind. Essentially the Church was birthed by Christ in the world to “make all things new” and not to borrow from the world system.

Sounding like the World
Why then do we hear Christians speaking like the world? The jury is still out on whether the Church is maintaining or increasing its influence in the world or whether the world has taken the upper hand by increasing its influence in the Church. Take Archbishop Desmond Tutu for example. Most people are unsure if Tutu speaks for the Church or for the world system that the Church was sent to transform. Tutu speaks the language of Babylon but dresses it up in religious garb. He has repeatedly rubbished Biblical concepts like spiritual rebirth, salvation in Christ alone, repentance from sin and the consequence of sin. In fact, Tutu used the term ‘homophobic’ – a word coined by radical homosexual activists to condemn those who disagree with their lifestyles – to threaten the God of Heaven. Tutu reportedly said in his condemnation of the Anglican Church that he would not serve a God that is ‘homophobic’. To be sure, the God of the Bible condemns the sin of homosexuality just like He condemns all sin. That then, according to homosexual activists and Tutu, makes the God of the Bible a ‘homophobe’. This means, that if our God does not repent of His condemnation of the sin of homosexuality, the great Archbishop, the darling of the world media, will not serve Him any longer.

Allowing deception
During my stay in the USA, I was amazed at the deception of the Church. Following Al Gore’s erroneous warnings about climate change and the humanistic frenzy that has gripped Hollywood to fight global warming and ‘save the planet’, a church in Orlando Florida has abandoned its mandate to evangelise the world, and has joined the latest liberal craze to save the planet. Directly after the Sunday service the congregation, led by their pastor, scours the surrounding community’s garbage bins, separating glass from plastic etc, for recycling purposes. Saving the planet or ‘Mother Earth’ is a key tenet of New Age philosophy and is the religion of Hollywood. The pastor of this church is a frequent guest on the American news media and is often commended for his ‘progressive’ stance. However, when a church redirects its focus to saving the planet rather than saving souls, then not only has the language of Babylon infiltrated the sanctuary, but its philosophy as well.

Tolerating sin
It is no different in South Africa. Secular humanists, New Age philosophers and homosexual activists have all developed a deceptive language that, on the face of it, sounds benign and innocuous. Tragically however, Christians have bought into this deceptive language wholesale. Babylonian terms like gay, homophobic, tolerance, celebrating our diversity, holistic, interfaith, common humanity, positive energy, peace gardens, hate crimes, human rights, etc all conspire to undermine and refute Biblical commands and principles. The term ‘gay’ was coined in the seventies by homosexual activist whose chief aim it was to gain social acceptance for their sexually deviant behaviour. More recently, tolerance was touted by the liberal secular media as the most important virtue one could exhibit. However, what the humanist and homosexual activists are trying to convey by their hysterical demands for tolerance, is quite different to the Christians understanding of the term. Herein lies the deception of the language of Babylon. When the humanists and their allies demand tolerance what they are actually demanding is that we tolerate sin, all manner of sin. We may not agree with the sin, but we have to tolerate it, because as they claim it is their human right. The only problem with this concept is that nowhere in the Bible does God command us to tolerate people. That is why I was alarmed to see the word appear in several Christian documents. Significantly, however, we are called to love people. Unfortunately for the humanist, love and truth are interchangeable. God commands us to love people and love commands us to tell them the truth about their sinful lifestyles, not to tolerate these lifestyles.

‘Alternate’ lifestyles
Celebrating our diversity is another term popping up in Church circles. Again, there is nothing sinister about celebrating our diversity unless we know why the humanists and their cheerleaders in the liberal media have consistently promoted this idea. Celebrating diversity in Babylonian speech not only acknowledges ethnic and cultural diversity but sexual diversity as well. Homosexual activists argue that ‘alternative’ lifestyles like homosexuality, lesbianism, transgender and non-determined gender identity (whatever that means) are all worthy of equal acceptance within our common humanity along with the immutable characteristics of race, skin colour and ethnicity.  Celebrating our diversity then becomes a self-indulgent, sexually depraved acceptance of every kind of licentious and deviant behaviour under the banner of an all inclusive ‘common humanity’. Nowhere in the Bible does God command us to celebrate our diversity. He does, however, instruct us to “love your neighbour as yourself”. As a consequence, celebrating our neighbour’s sinful lifestyle in all its depraved diversity is not Scriptural for the simple reason that if their lifestyle is not acceptable to us, it should not be acceptable for them.

Exclusive Christianity
Interfaith is another concept that sounds inclusive and unifying. Most government initiatives demand interfaith services or prayer events. The prevailing philosophy is that all faiths are of equal standing and therefore deserve equal exposure. As a result, Christian ministers are often seen officiating at events with sangomas and witchdoctors. Remarkably, the language of Babylon in its most subtle form has deceived many in the Church into believing that the Christian concept of religious freedoms and respect for others to observe their faith, is the same thing as religious equality. Christianity is essentially a faith in the Person of Jesus Christ for eternal salvation and is the only way to God the Father. This theological fact sets it apart from all other religions in that we do not have to work our way to heaven through good deeds. It is therefore very different from other religions. Consequently, no earthly representative of Jesus Christ has the authority or Biblical mandate to equate Him with other religious figures. Jesus Christ stands alone. He is “the Way, the Truth and the Life”. Any representative of the Church who misrepresents the Son of God at an interfaith event is therefore not inclusive or unifying, he is quite simply fraudulent. Nowhere in the Bible does Jesus, or the prophecies that precede Him, describe Him as “one of the ways to heaven”.  As a result, there is no such thing as ‘interfaith’, there is only faith in Jesus Christ.

So why is the Church of Jesus Christ adopting the language and philosophy of Babylon? The simple answer is political correctness or PC. Many Church leaders go to great lengths to appear culturally relevant in our increasingly humanistic society. We want to spread the Gospel of Jesus Christ but we don’t want to offend anybody. So in our striving to appear politically correct, we abandon our core responsibility to be Biblically Correct. The wonderful reality about the Gospel of Jesus Christ is that it will always be offensive to those who reject God’s offer of redemption. There is no PC way of telling a person lost in his sins that he is destined for hell and needs to repent of his sins and be born again. So we adopt Babylonian speech in the hope that we sound PC. The problem is that PC is not BC. When we trade our faithfulness and loyalty to the Scriptures for Babylonian speech to appear culturally relevant or politically correct, we invariably dilute the Gospel and its message of salvation. The point of the Church in the world is that the world begins to sound like the Church and not the other way round.