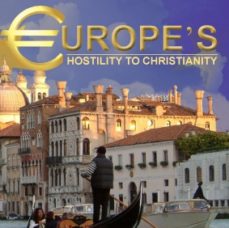 Missionary powerhouse
In 1900, Evangelicals in Europe constituted 45% of the world’s Evangelicals. Now less than 4% of all Evangelicals in the world are in Europe. The 19th Century was the greatest century of missionary advance. It was a century of astounding inventions and of spectacular advances in technology. Many countries in Europe experienced dynamic spiritual revivals. Christian missionaries from Europe won whole tribes and nations to Christ, in the remotest regions of the globe. For over a thousand years, Europe had been Christendom – the heartland and stronghold of Christian civilisation. The 19th Century witnessed such staggering growth in numbers, productivity, power and wealth, that most would have imagined that Europe would have continued to dominate the globe for centuries to come. The optimism which had prevailed in the 19th Century gave way to profound pessimism after the First World War.

Devastation and pessimism
However, World War I shattered Europe. An entire generation of young men died in brutal trench warfare. 1914 marked the end of the greatest century of Christian advance and the beginning of what proved to be the worst century of persecution. The consequences of the First World War continues to have far-reaching repercussions to this present day. Of the 60 million European soldiers who were mobilised from 1914 to 1918, over 9 million were killed, 7 million permanently disabled and 15 million seriously injured.
Retreat from victory
At the first World Missions Conference, in Edinburgh, in 1910, delegates were anticipating the completion of the Great Commission within their generation. No one in 1910 would have anticipated the wholesale abandonment of entire nations to communism, false religion and heathenism. Nor would anyone have predicted that the Church would retreat from victory to such an extent that they would even be questioning the existence of the devil, or hell, or reinterpreting marriage to include what God in the Bible describes as perversion and an abomination.
Secularism
The cataclysmic conflict of the First World War has to be recognised as one of the most tragic and senseless conflicts in history. Even more devastating than the actual numbers of the people killed, crippled, or seriously injured, was the damage to the spiritual life of Europe. Europe went from being a majority-church-attending population to a continent where most people do not go to any church.
Revolution
The secularisation of Europe and the moral breakdown coincided with a great resurgence of revolutionary fervour and Marxist communism which filled the vacuum left by the collapse of the Russian Empire and emergence of many new countries in Eastern Europe.
The de-Christianisation and secularisation of Europe was not only unprecedented in its scope and speed, but would have been unthinkable before the First World War. Social Darwinism had become popular amongst most governments in Europe. This thinking emphasised the importance of armed struggle between nations as healthy and necessary for progress and evolution. In the wake of the two World Wars, many came to speak of a post-Christian era. Wars and revolutions through the entire world led to disorder and Christianity was generally marginalised.

Unethical compulsion
Medical staff have been placed under extraordinary pressure to participate in procedures which they are convinced are unethical, such as sterilisations, euthanasia and abortions. Many European Union States do not provide for conscientious objection for medical personnel. Many midwives, doctors, nurses and pharmacists are being placed under unbearable pressure to go against their conscience. In France, pharmacists are being compelled by law, to sell abortion drugs.

Desecration and hatred
Churches and cemeteries in Spain and France have been desecrated and vandalised by Muslim immigrants. In Norway many historic Christian churches have been burned down by arsonists. Black metal fans have declared war on Christianity and a prominent black metal band Burzum, produced an album entitled Aske (Ashes) with a picture of the charred remnants of this famous Viking Church.

Hypocrisy and extremism
One example is how Norwegian mass murderer, Anders Breivik, was instantaneously and falsely labelled a “Christian fundamentalist” by media worldwide. There was absolutely no evidence of this. In fact, his own writings on the web made it clear that he rejected Christianity. Yet anti-Christian prejudices needed a Christian equivalent to Muslim terrorism. All too many jour at the hospital, was dismissed for emailing a prayer which he thought would be inspirational to his colleagues. The offensive prayer was: “Teach us Good Lord to serve as You deserve, to give and not to count the cost, to fight and not to head the wounds, to toil and not to seek for rest, to labour and not to ask for any reward, save that of knowing we do Your Will.”

Double standards
The head of the British Broadcasting Corporation (BBC), Mark Thompson, admitted that Christianity is treated with far less sensitivity than other religions, because “it is pretty broad-shouldered.” He said that is because other faiths have a very close identity with ethnic minorities and they have to consider the possibilities of “violent threats” instead of polite complaints, which is more common from Christians.
The BBC has also been criticised for its “senseless hypocrisy” in no longer referring to dates by BC (before Christ) or AD (Anno Domini), but to what they call religiously neutral terms of BCE (Before Common Era) and CE (Common Era).
Although British Airways allows members of other religions special status for religious garments, such as the Muslim Hijab, the Sikh turban, or Kara bracelet, Christian employees have been forbidden to wear crosses which they claim breach BA’s uniform code.

Anti-Christian Bias
British member of parliament, David Simpson, responded to the frequent claims of secular campaigners that Christianity has been the cause of the world’s worst historical crimes by pointing out that it was, in fact, ideologically atheist regimes that committed the very worst atrocities throughout the 20th Century. He also pointed out that Christians are facing increasing persecution at the hands of aggressive secularism:
“In the United Kingdom, the policy seems to be that people can do whatever they like against Christianity – criticise it or blaspheme the Name of Christ – as long as they do not insult Islam. It is sad because this country is based on civil and religious liberty for all.”
He catalogued numerous cases where British Christians who publicly object to homosexuality, sex education and abortion, or who simply try to share their faith with others, have faced prosecution.

A Deafening Silence
Yet the British government remains mostly silent about the massacres of thousands of Christians at the hands of Muslim militants in Northern Nigeria, in Ethiopia, in Sudan and in Pakistan. Christianity is completely outlawed in many Arab States, including Kuwait, Syria, Yemen and Saudi Arabia. The fact is, secular humanism is the most destructive religion of all time and the most intolerant.

Europe for Christ
Europe today must be one of the most spiritually needy continents on earth. The Church is called to be “a house of prayer for all nations.” Are you, your family and your congregation praying regularly for Christians suffering intolerance and discrimination in Europe? Pray that the Lord will thrust out labourers into His harvest field to win this continent back to Christ.
Author Dr. Peter Hammond has been a missionary for over 30 years. He is also a conference speaker and author. Tel: 021 689 4480;  www.frontline.org.za