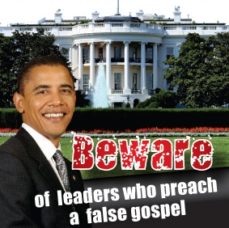 In May 2012, Barack Obama finally came out during an interview and endorsed same-sex marriage. Obama’s unsurprising announcement makes him the first sitting president in US history to publicly support non-traditional, counterfeit marriage. And with that announcement, he took a sledgehammer to civilisation’s most enduring institution of heterosexual marriage. The leader of the free world has also become the world’s most powerful activist for the social legitimisation of sexual perversion and the murder of the preborn.

A convenient reversal…
Obama is the most dangerous political leader on earth because he invokes the Name of Christ to advance his evil agenda. During the ABC interview Obama referred to “Christ’s sacrifice for mankind” to justify his support for same-sex marriage. In a 2008 interview with Rick Warren, then Senator Obama responded to Warren’s question about marriage declaring that “marriage is a union between a man and a woman…it is also a sacred union because God is part of the mix.” But he was running for president then and was addressing an Evangelical Christian audience.
Obama claims his views on same-sex marriage have “evolved.” Most analysts were not surprised by Obama’s about turn on marriage. The timing of Obama’s announcement was also exposed as a political ploy. The White House claimed the US president was forced to clearly define his position on the “civil rights of homosexuals” because vice president, Joe Biden pre-empted him by indicating his support for same-sex marriage in an earlier television interview. However, these claims were debunked when it became clear that Obama’s announcement was carefully calculated for maximum political and financial benefit.

Seeking financial gain
The day after he announced his endorsement for counterfeit marriage, Obama flew to Hollywood to attend a fundraiser, hosted by actor George Clooney. The event, attended by the pro-homosexual Hollywood elite raised a reported $15 million (R120 million) for Obama’s re-election campaign. This event was closely followed by a fundraiser by the Lesbian, Gay, Bisexual and Transgender (LGBT) movement in Los Angeles and another by homosexual entertainer Ricky Martin in New York City. Fox News reported the US president’s campaign received millions of dollars in new contributions within hours of his endorsement of same-sex marriage.

A sexually perverted generation
The Obama campaign immediately posted merchandise on its website brandishing the slogans “My two dads support Obama” and “My two moms support Obama” – presumably to cash in on the president’s pro-homosexual position. The liberal media in the US went into overdrive. Robin Roberts, the ABC News reporter who conducted the Obama “coming out” interview, spoke the next day of the “thrills and chills” she experienced when the president endorsed same-sex marriage. In addition, the liberal Washington Post newspaper ran a hatchet front page article the day after the president’s announcement alleging Republican presidential nominee, Mitt Romney “bullied a homosexual classmate almost 47 years ago.”

Smear campaigns
The article was carefully timed to coincide with Obama’s ostensibly random announcement. The liberal media (who are supposed to be fair and objective in their reporting) are already running smear campaigns against Romney labelling him an “anti-gay homophobe.” Conservative media analysts exposed the mainstream media’s staggering hypocrisy pointing out they completely ignored Barack Obama’s own confessions of alcohol abuse, drug use and the bullying of a female classmate during his college years. Obama’s public endorsement of counterfeit marriage should come as no surprise to Bible believing Christians. Immediately after his inauguration in 2009, the Obama administration changed the White House website and revealed their radical anti-family pro-abortion, pro-homosexual agenda.

The media’s messiah
Obama was the first US president to refuse to host the annual National Day of Prayer observance at the White House in May 2009. However, following his snub of the prayer event, Obama invited homosexual activists to the White House and declared June ‘gay pride month’. He also made good on his promise to repeal the ‘Don’t Ask Don’t Tell’ policy to provide homosexuals the legal power to disclose their sexual status in the Military and more importantly, penalise anybody who dares to disagree with their lifestyle.
And just in case you are still not convinced that Obama is committed to radically redefining the God-given institution of marriage, his administration wasted no time in announcing the repeal of the Defence of Marriage Act which he thinks is “a bad idea.” Barack Obama, the media created ‘messiah’ swept into office on a wave of ‘hope and change’ hype.

A divisive man
But he has done more to divide Americans along ideological lines than any other US president in history. Newsweek magazine’s cover had an image of Obama with a halo above his head in the rainbow colours of the homosexual movement with the accompanying slogan ‘The first gay president’. The mainstream liberal media is already portraying Obama as a saint for endorsing same-sex ‘marriage.’  Anybody supporting the Biblical definition of marriage is portrayed as “hateful,” “bigoted,” and “homophobic.” The warnings of Scripture come to mind, “Woe to those who call evil good, and good evil; who put darkness for light, and light for darkness…”  Isaiah 5:20.

Proclaiming unbiblical ideologies
Barack Obama is one of the most dangerous men in the world because he justifies evil while claiming Christ. In fact, he has consistently justified his unbiblical ideology by twisting Scripture. Obama has also made the contradiction of Scripture acceptable and cool. So much so, that an increasing number of pastors still support him in spite of his anti-Christian policies.
Obama is undeniably the most pro-abortion and pro-homosexual president in US history. Sexual perversion and the murder of innocent life are detestable sins in the sight of God. The Bible clearly condemns homosexuality in both the Old and New Testaments. Yet, millions of Christians still loyally support Obama!

Even pastors are deceived!
The media interviewed Reverend Delman Coates of Mount Ennon Baptist Church in America who indicated his unwavering support for Barack Obama despite his anti-Biblical stance. When questioned about polygamy, Reverend Coates replied, “President Obama [not God] has set the boundaries for marriage.” Another pastor was asked whether he would continue supporting Obama following his endorsement of same-sex ‘marriage.’ The pastor replied “I would have to pray about it.”

Obama is enabled by the Church
The United States once influenced the world with its strong Biblical heritage. The US also sent thousands of missionaries to the most remote parts of the world to spread the Gospel.
Today, because of widespread compromise, Christian leaders have to “pray about” supporting a man that blatantly rejects the authority of Scripture and exalts himself above the God of the Bible. A recent survey revealed that 51% of Americans now support counterfeit marriage and – for the first time in US history – a minority oppose it. Apparently, Scripture has ceased to be the final authority on matters of marriage, family and sexuality. The worldview of most Christians today is informed by the ideology of the media and prevailing political system.
Popular global figures like Obama and Desmond Tutu often overrule the Scriptures with their personal views of morality. As a result, many Christians have rejected the Word of God and have adopted the opinions of sinful and fallible men. Obama could not propagate his counterfeit ‘Christian’ views without the help of the Christian Church. Ultimately, Obama’s unbiblical message has gained traction because it has enjoyed the unequivocal support of the many Christians who consider race, political expediency and media star power more important values than Scriptural authority.
The lesson for the Church in South Africa is how society declines when the Church remains silent and media indoctrination and political affiliation dominate society’s values. For more than 200 years the God-given institutions of marriage and the family contributed significantly to America’s economic and social success. These vital social pillars are now being redefined to legitimise perversion. The US is rushing toward paganism. Only the Church of Jesus Christ can reverse this disturbing trend by calling the nations to repentance and a return to the authority of God’s Word
Author Errol Naidoo is the President of the Family Policy Institute. For info or to support him,  please see
www.familypolicyinstitute.com