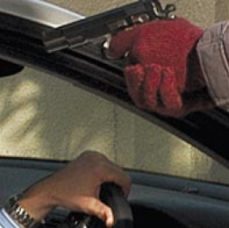 I had the privilege of leading one of the nurses to Jesus. My wife and son came to visit me every single day without fail. They went through almost as much trauma as I did but were not getting the special treatment that I was. My mother and three sisters (and brother-in-law) drove 380km to see me. They announced that two VIP’s were coming to see me the next day but would not say who.
To see my brother and sister–in-law walking into the ward the next afternoon was such a surprise! My wife, son and I couldn’t believe our eyes! All the way from England! We were all in tears and just hugged one another, and laughed and cried. When they heard of my bad news, they said they just had to come and see me.
At the end of that week, I was pronounced fit enough to return home. I was wheeled out to the car in a wheelchair. A physiotherapist helped me cope with getting up and down, walking on crutches, etc.; even simple everyday things became a mission to accomplish – we take our health for granted. Everything had to be planned in advance. Two days after returning home, I experienced excruciating pain in my back. I thought I was going to die! My muscles began to seize up suddenly. In spite of the muscle spasms I was able to cough and cough I did. Blood came pouring out of my mouth.  Alarmed, my wife phoned our family  doctor. I was told to come in first thing the next morning for an x-ray. It was confirmed that I had two cracked ribs and that my left lung was filling up with blood. It was back to hospital. I needed to take things easy and let nature take its healing course. Another week in a hospital bed.
With church groups in three different provinces around the country praying for me, I had no option but to be healed. Again I was back home and recuperating in the company of my loving and very supportive family. I was off work for the rest of the year. This led to some serious financial losses as I received no compensation from either the Road Accident Fund nor from Workman’s Compensation.
I lost tens of thousands of rands due to not being able to give extra lectures. There is no fund to cover one in the event of a highjacking.  A case of attempted murder was opened by the local police but to date no arrests have been reported. It is sad that criminals and the syndicates supporting them, can just force themselves into your life, violently ruin it and get away with it. Governments who pride themselves on removing the death penalty will have to answer to God as to why they have subjected their law-abiding citizens to the death penalty instead! Not only do you and your immediate family suffer but also the community that you serve – there are vast, rippling (negative) effects. Medical expenses, counselling (by psychologists or psychiatrists), protracted battles with insurance companies or debtors, security measures to be upgraded, etc. I have lost my ability to concentrate for extended periods on technical type work and hence have had to give up my research. I was determined not to become a victim and was elected as chairman of the South African Institute of Electrical Engineers, KwaZulu Natal Branch, last year. Nevertheless my reserves of energy have become limited. I suppose being over the age of fifty also contributes to this.
I would like to emphasise that having been through a traumatic, near death experience, it gives one a new set of values. One of these is the importance of communicating  appreciation and love to those around you. Say it and say it often. Love is the only thing I know that grows as you give it away! Life is really very temporal and fragile. Live it by loving those close to you. Allow Jesus into your life; then you will know everlasting life and love of the highest degree – after all He did lay down His life for you. Who else loves you that much? I conclude by thanking all those people who supported me either by visiting or through praying. There is no better family than the family of God in Christ Jesus.

HOW TO AVOID A HIJACK SITUATION

80% of hijackings take place in home driveways. Check your driveway and street before you leave or enter your premises. Be on the look out for suspicious vehicles/persons.
Always be cautious and aware of surrounding obstructions and shrubbery that may conceal a hijacker.
At road junctions, leave enough space between your car and the one ahead of you to allow you to escape.
If a car has driven into the rear of your car, and the impact is fairly light, wave to the driver to follow you to somewhere safe to trade necessary information.
When approaching your vehicle, always have your keys ready but not visible. Be aware of your surroundings & if you notice any suspicious behaviour immediately walk away from your car towards a safe area.
When approaching a red traffic light at night, slow down so that you only reach it when it turns green.
Do not stand by your car if you are waiting for somebody & never sit in your parked vehicle without being aware of your surroundings.
Once in the car, lock all your doors & leave your window only partially open. Keep any valuables, briefcase, handbag & cell phone out of sight.
If you suspect you are being followed, take a different route home. If you still think you are being followed, drive to the nearest police station. Do not stop your car for any reason as this will give your pursuer the ideal opportunity to hijack your vehicle.
Avoid driving through high crime or unfamiliar areas as well as late at night/early hours of the morning when the roads are quiet.
Drive in the centre lane away from pedestrians where possible.
When you are a victim of a car-hijacking, don’t put up a fight. Do exactly as told by the hijackers. Do not reach for your purse or valuables.
Gather as much information as possible without posing a threat.