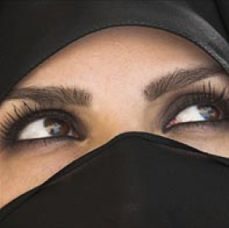 I was born in Jordan to a Muslim family.  My uncle, who’d moved to Chicago, told my dad about the wonderful  opportunities in the U.S., so my dad moved our family here when I was eight years old.  While he was excited about providing for his family, my father worried that we’d grow up “Christian.”  So while my siblings and I went to a public school during the week, we attended Islamic studies on the weekends.  The only friends I had were the Muslim children who attended Islamic studies with me.

4 WAYS TO REACH OUT TO MUSLIMS
There are more than 1 billion Muslims in the world, and more than 5 million in the U.S., making Islam one of the fastest-growing religions in America—quickly emerging as the second-largest religion behind Christianity. Here’s what you can do to make an impact.

1.   Pray for them.  The only way a Muslim will ever come to Christ is if the Holy Spirit works in their hearts to draw them to the truth.  Pray specifically that:  Muslims would be open to reading the Bible and would believe the Bible is the preserved, authentic Word of God; they’ll believe Jesus was crucified for their sins and resurrected from the dead; God will remove any misconceptions they have about Christianity; God will give them courage to surrender to Christ.

2.   Know your faith.  It isn’t as important to a Muslim what you know about Islam as it is important for you to know about your own faith.  Steep yourself in God’s Word so you can address any questions a Muslim may have about what the Bible and Christianity teach.

3.   Remove any misconceptions about Muslims.   Not all Muslims are extremists, such as the Taliban. Not all of them hate Americans or Jews.  Basically, they want the same good things from life we want.  Many Christians assume all Muslims know Islam and the Qur’an very well.  The fact is, however, most Muslims are Muslim in name only; they know little of their faith.

4.   Befriend them.  The best way to reach out to a Muslim is to show her Christ’s love. Sharing the gospel isn’t enough to reach a Muslim.  She has spiritual blinkers on (2 Corinthians 4:4) that require time, prayer, and the outpouring of Christ’s love working through you.  But the results of your persistence will be worth it (Galatians 6:9).