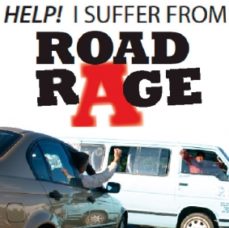 WHILE TRAVELLING ON THE ROAD, these are often our thoughts or expressions when others in their vehicles do something we consider unacceptable and irritating. We experience an outburst of anger which we cannot control. When really aggravated it becomes what is commonly called ‘road rage’.
How often we justify ourselves at such an event by calling it anger, not sin. After all isn’t that what Scripture implies by, “Do not sin; do not let the sun go down on your anger.” Ephesians 4:26. Did you know that the Bible is full of instances of anger?
Cain murdered his brother Abel because he was angry. Esau was angry with his brother, Jacob, who stole his birthright. Joseph’s brothers were angry with him when he shared his dreams with them. Potiphar was angry with Joseph when his wife accused Joseph falsely.
I have only referred here to some instances of anger in the book of Genesis, but the rest of the Bible is full of examples of temper gone out of control!
More specifi cally, what about road rage? It happens when the driver of the other car does something which irritates you to the point of anger where you open the door to the possibility of explosive rage which can even get you into trouble. How do you counter that?
When it happens remember that in all likelihood you yourself might have been guilty of doing something similar on the road. Is there a driver in the world who has never made a faux pas? Surely this is the principle taught by the Lord Jesus when He said, “Why do you see the speck that is in your brother’s eye, but do not notice the log that is in your own eye?” Matthew 7:3. How often did we hope for the patient endurance of other drivers when we made errors in judgement and drove in such a way that we inconvenienced others?
Understand that all sinful anger is the result of your not getting what you want or what you consider your right. This is the truth taught in James 4:1-3. These verses can be summed up exactly like that: not getting what you want! On the road, it means you want a hassle-free trip, but someone spoils it for you and you are angry that you have been inconvenienced. Is this not tantamount to selfish pride?
Pray for grace. In the passage in James chapter 4:6 we are taught that God gives more grace, that He opposes the proud but gives grace to the humble. Grace is God’s undeserved favour given to us in every situation. When we are enabled to practise the fruit of the spirit which is self-control, it is because of the grace of God. We need that for every kilometre we spend on the road. If you pray for it God will grant it, for He promised to do so in this very verse.
You must “Submit yourself to God and resist the devil, then he will fl ee from you.” Th at is the teaching of James 4:7. Th e devil wants to give you a short fuse and so spoil your Christian testimony.
Be humble enough to admit your need of God’s help and turn your back on the devil and be what God wants you to be. If and when you become guilty of sinful frustration and anger on the road, confess the sin to God and ask Him to help you and enable you to handle your time on the road better than you have in the past.
Th is is the teaching of James 4:8-10 “Come near to God and He will come near to you. Wash your hands, you sinners, and purify your hearts, you who are double-minded. Grieve, mourn and wail. Change your laughter to mourning and your joy to gloom. Humble yourselves before the Lord, and He will lift you up.”
Isn’t it encouraging to note that this quotation ends on a great promise that if you humble yourself before the Lord He will exalt you! Th at alone makes it worthwhile being calm, cool and collected in the power of the Holy Spirit on each journey you undertake. Before we attempt to justify our fury on the road where other people’s driving habits anger us, let us remember that God wants us to practise that fruit of the Spirit which is self-control.
Also, take note that the Lord Jesus Christ only expressed His righteous anger, which was always without sin, on a few occasions. His anger focused on God and His kingdom, His rights and His concerns more than on His own. It arose not because people had sinned against Him but
because they had sinned against His Father and against other people. He did not throw fi ts or withdraw. What about sinful off ences aimed at Him personally? How did Jesus respond? Amazingly not with anger! What about His reaction to severe abuse? Look at 1 Peter 2:21-23. He never
took revenge or sinned with His tongue. He prayed for forgiveness for His enemies. He laid aside His personal rights, Philippians 2:5-11, and He served His enemies without anger. What a model to follow!