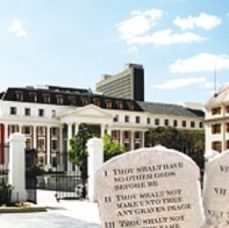 God, Government and the Ten Commandments

MANY PEOPLE LABOUR UNDER THE delusion that the Bible has nothing to say concerning social structures, constitutional models or political affairs.  However, while approximately 29% of the Bible deals with spiritual matters and our personal lives, 71% of the Bible deals with social, political and national issues.
Our Lord Jesus Christ taught important spiritual principles and concepts that affect every area of social and political life.  To the Roman governor, Pontius Pilate, Jesus said: “You would have no authority over Me, unless it had been given to you from above” John 19:11.  Civil authority is clearly delegated by and answerable to God.
The Bible is very clear that God has instituted civil government as “an agent of wrath to bring punishment on the wrongdoer” (Rom. 13:4).  The civil government is called to be a minister of God’s justice: “to punish those who do wrong” (1 Pet. 2:14).
The primary duties and responsibilities of civil government are the protection of law-abiding citizens and the punishment of law-breaking criminals.  Psalm 101 reminds us that the duty of God-honouring rulers is to destroy the wicked, to root out evil and to protect the law abiding.
Jesus taught that we are to: “Give to Caesar what is Caesar’s and to God what is God’s” (Matt. 22:21).  The civil government does have certain legitimate rights and responsibilities, but these are very limited.  We are to pay taxes (but any taxation as high as 10% was condemned as: “oppressive” 1 Sam. 8:10 – 18), to serve in the military when required, to testify in court as a witness to any crime, and to respect the life, property and reputation of our neighbours.  However, our worship of God, the education of our children, our private property, our individual enterprise and personal views (freedom of worship, freedom of education, free enterprise, freedom of speech) are clearly not made in the image of Caesar and are outside of the lawful jurisdiction of a Bible-based constitutional state.
Our Lord upheld the authority of the moral, social, economic and political Laws of God as recorded in the Old Testament: “Do not think that I have come to abolish the Law or the prophets; I have not come to abolish them, but to fulfill them.  I tell you the truth until Heaven and earth disappear, not the smallest letter, not the least stroke of a pen, will by any means disappear from the Law… anyone who breaks one of the least of these Commandments and teaches others to do the same will be called least in the Kingdom of Heaven, but whoever practises and teaches these Commandments will be called great in the Kingdom of Heaven.” Matt. 5:17–19
In His public teaching, Jesus affirmed the Old Testament Laws against murder, theft and adultery (Matt. 5:21–27); the dishonoring of parents (Matt. 15:4); and perjury (Matt. 19:18).  The Lord also affirmed the right to private ownership of property and the free market exchange and profit (Luke 16:11; 19:12–27; Matt. 20:1–15; 25:14–30).
Our Lord also taught that civil authorities are to be public servants (Matt. 20:25–28): “The kings of the Gentiles lord it over them; and those who exercise authority over them call themselves benefactors.  But you are not to be like that.  Instead the greatest among you should be like the youngest, and the one who rules like the one who serves.” Luke 22:25–26. It is for this reason that officials in civil government are called “ministers” or “servants” of God. The concept that civil government is a servant of its citizens is a uniquely Christian idea that originated from these verses. Hence the term “Prime Minister” – as the first servant.
While most groups today emphasise external solutions to our many social problems – salvation through politics, or through changed social structures and laws – the teachings of Christ emphasise the need for internal change – within our hearts and minds. “For out of the heart come evil thoughts, murder, adultery, sexual immorality, theft, false testimony, slander…” Matt. 15:19
True freedom comes from within. The foundations for a truly free and prosperous nation can only be laid in characters, minds and lives changed by the grace of God. In order to be successful, a society needs to be made up of honest citizens who will not steal, diligent workers who are hard working and productive, compassionate families who are concerned for their neighbours, responsible workers who will fulfil their obligations and be faithful stewards of public resources. For nations to be strong, their families need to be strong.  For governments to be good, their citizens need to be good. Those who cannot control themselves are not capable of ruling over a city (Prov. 16:32). Those who cannot manage their household well are not qualified to lead others (1 Tim. 3:4–5).

An independent judiciary and the right to a fair trial (2 Chron. 19:5 – 7).  In Deuteronomy 19:15 – 19, principles for a fair trial were set out:
one is innocent until proven guilty,
the right to due process of law,
witnesses must personally confront the accused,
a matter must be established by two or three witnesses,
judges must be impartial.

A national legislature (law making body) where one house was composed of representative judges or officials elected by the people (Deut. 1:13 – 17): “But select capable men from all the people – men who fear God, trustworthy men who hate dishonest gain – and appoint them as officials…” Exod. 18:21

A second house in the legislature was composed of two hereditary elders from each of the eleven tribes (or geographic areas) of Israel in addition to 24 priests from the tribe of Levi and two scribes from each of the 12 tribes.  This formed the Sanhedrin.

A decentralised state with most responsibilities and powers resting on the local government, the family and the individual.  (Centralisation of power in a unitary state has always been a pagan tendency as seen in Nineveh, Egypt and Babylon.)  Because power corrupts, it is wise to limit and divide the powers of civil government in a system of checks and balances. (Ex. 24:1; Deut 1:13 – 17; Acts 17:26)

A free market economy based on the private ownership of property and individual free enterprise.  Any taxation of 10% or higher was defined as oppression and any taxation of property, or inheritance, was strictly forbidden.  Institutions and individuals involved in the full time service of the Lord were not allowed to be taxed.  Biblical economics also forbids unjust weights (unback currency) and measures (inflation). (Ex. 20:15,17; Deut. 19:14; Proverbs 10:2 – 4; 1 Thess. 3:10; 1 Sam. 8:10 – 18; 1 Kgs. 21:3)

The Ten Commandments not only provide the foundations for all social order, but they are also the foundations for all our rights.  Each Command deals with a specific area: God, worship, speech, time, authority, life, love, property, truth and conscience.
The Ten Commandments cover our responsibility to God, our responsibility to our parents and our responsibility to people.  Obedience to the Decalogue would result in a respect for God, respect for people and respect for property.
Each Command includes a prohibition.  For example: “You shall have no other gods before Me…” forbids polytheism, pantheism, and atheism.  However, each Command also includes an implicit right.  For example, the first Commandment implies freedom of worship.
Similarly, when the Third Commandment forbids profanity, false prophecies and blasphemy, and when the Ninth Commandment forbids perjury, gossip, or slander, these are the only restrictions given to speech.  Outside of those limited prohibitions, there is freedom of speech.
Aside from forbidding idolatry in the Second Commandment and covetousness, greed and selfishness in the Tenth Commandment, we have freedom of conscience.
Where the Sixth Commandment forbids murder, suicide, abortion and euthanasia, it entrenches the right to life.  Just as the Seventh Commandment prohibiting fornication, adultery, or perversion, entrenches the sanctity of marriage.  Similarly by the Eighth Commandment forbidding theft and fraud, it entrenches the right to private ownership of property.

The Ten Commandments are the foundation for all these rights:

“Hate evil, love good; maintain justice in the courts… let justice roll on like a river, righteousness like a never failing stream!” Amos 5:15, 24

As George Washington declared: “Religion and morality are the indispensable supports to good government.”