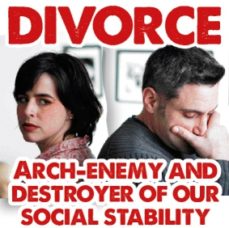 The number one problem in marriages today is not sex, or lack of finances, or adultery but the breakdown of meaningful communication!  Divorce, the archenemy and destroyer of our social stability, is rocketing at an alarming rate.  Seven out of ten marriages in SA are ending in divorce.  The quick solution for a failing marriage is believed to be an instant divorce, which appears to be the easiest way out.
Divorce is a highly traumatic experience, not only for the husband and the wife but also for the children, family and friends.  Divorce has become a large part of modern life and it impacts each one of us.  Divorce is rated second on the life-stress scale, after the death of someone close to you. In some ways divorce is worse than death. With divorce come strong feelings of anger and betrayal that heighten the grief.
All of us have probably been affected by divorce in our family or among close friends.  The media constantly portrays divorce as normal and marriage as irrelevant.  For many, divorce is not a choice but a tragedy that has struck and destroyed hope and happiness.  Divorce is emotionally very traumatic and painful.  It leaves not only emotional and psychological scars, but spiritual ones as well and faith can be shaken at such a time.  It often becomes a desperately isolated and lonely road with burdens too heavy to bear.
The Bible is clear that divorce should be avoided at all costs. The question is: when divorce has been thrust upon someone; when divorce has not been avoided; when a marriage has been ripped apart and dreams have been broken, should the wounded victims be left at the side of the road to die?  Or should there be a compassionate and loving response to lead the crushed and broken person down the road to recovery and restoration?
It is not our place to make judgement about who is to blame.  All too often we make assumptions because we only hear one side of the story, or because we think we know the people involved rather better than we really do.  Neither is it our role to condemn people for their sin.  Divorce is not the unforgivable sin we have often assumed it to be.  Forgiveness is available to all who will accept it.  The Bible also insists that forgiveness is available to all, even if they feel they cannot forgive themselves.

LATHICIA KLACKERS is a minister’s wife.  She has over 28 years of extensive marriage counselling experience.  In 1990 she launched a divorce recovery program in S.A.  She presents these workshops, nationally and in the U.K.

My journey to divorce recovery –
A PERSONAL TESTIMONY BY SUSAN DICKE
I GREW UP FANTASISING ABOUT THE perfect man I was going to marry – one who would always love me and be there for me. I was in denial about the depression that made me feel such despair, failure, hopelessness and loneliness. Twelve years ago I met my husband. I was convinced he was God’s gift to me, who would make me a whole person, a person who would be accepted by God and society.
I entered the relationship with a lot of emotional baggage and very low self-esteem. I looked to my husband to fulfil my emotional needs and areas of lack in my life.
Initially I was so caught up with the security, a sense of well-being and happiness that was superficially there because of the intensity of the romance. I was blinded from seeing the gross flaws that were present in our relationship from the start. I thought that love was enough to keep our relationship healthy. However, we were not able to communicate freely on a deeper level where emotions and feelings could be expressed and we couldn’t really be transparent with one another.
I was desperately unhappy, depressed and lonely. I knew my marriage was in trouble, but I clung onto the broken fragments in a desperate hope that this would change. I believed that things would get better if I could be a better, more loving and more understanding wife. After all, I was a believer. I sincerely believed we would always be together.
Throughout my marriage I struggled with ill-health and depression. We had many personal problems which sapped our energy. I began to escape into a world of busyness to avoid the pain and the hurts that were festering inside my heart.
After eight years of marriage and several attempts to seek counselling and help, I realised that I had to give my husband an ultimatum. He did not see the need to go for counselling because he didn’t think we had serious problems in our marriage relationship. My husband left and my world fell apart. I had a daughter to parent on my own. I was consumed with fear, anxiety, shame and guilt, but I felt I had to hide the truth from everyone. Three weeks after my husband left, he filed for divorce. I was very ill at the time and I felt devastated and angry. My dreams for the future and all my hopes and aspirations were shattered. I felt frustrated, misunderstood and rejected. I wanted to die….
For the next three years I struggled to come to terms with the pending divorce. I was in denial and had a self-righteous attitude. I had subconsciously allowed myself to become a victim and was hurting so much inside.
Earlier this year I became desperate to change my life. I no longer wanted to be miserable, lonely and hurting, but I was ashamed that I couldn’t make my marriage work. I realised that I needed help and  approached my church.
This is where I started my long journey to recovery. I realised that I couldn’t start to heal or restore my life until I could honestly admit that I needed help because my life had become unmanageable.
After nearly three months of individual counselling, my counsellor told me about a Divorce Recovery Workshop by Lathicia Klackers that was to be held the following week. The timing didn’t suit me because I had so many deadlines to meet for work, but in my heart I knew God had an appointment with me. I was anxious and fearful about making myself vulnerable, but deep in my heart I wanted to change and become well again.
The Divorce Recovery Workshop was the turning point in my journey to recovery. For the first time I could admit how angry and hurt I was inside. I could be myself and be honest about where I was at. I could also begin to see where I had failed as a marriage partner. It was hard to come out of denial, but when I began to embrace the truth I could  get closure and begin my journey to recovery.
Although I had to work through a lot of issues and emotions which were very painful, Lathicia and others were there to listen and encourage me not to give up.

DIVORCE RECOVERY WORKSHOPS
The main aim of the workshop is to help men and women to recover emotionally from the devastation and hurt surrounding divorce.  It is about recovery and restoration – it does not offer a quick fix, but rather offers an understanding of yourself, the process of divorce and its impact on you as a person.
The seminar will deal with the breakdown of the matrimonial relationship which results in emotional & psychological trauma.  It deals with the restoration cycle and examines the stages of denial, anger, bargaining, depression, forgiveness, faith, acceptance and finally wholeness.  It also confronts the issues of loneliness, isolation and alienation from self and emphasizes the importance of family, friends and the adjustments necessary in the process of moving from married life to being single again.  Finally it leads to a new resolution and wholeness.
One of the advantages of the workshop is the group discussions between participants, which provide new perspectives, and the realization that there are a lot of people with similar and even more trying issues related to the trauma of divorce.  It allows for new friendships to be formed and enables each one to work through their pain and the process of divorce in a structured and meaningful way.  For those who are struggling in a stressful marriage:  Seek help, be committed to work through the difficulties in your marriage.  Your marriage can survive stress.
To those who are divorced:  You don’t have to carry the devastating effects of divorce with you for the rest of your life.  You can overcome the pain, make a decision to recover.  God heals the broken heart.