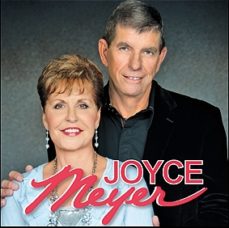 Getting to Know the Real Joyce Meyer
Regardless of one’s denomination or church background, most Christians have heard of Joyce Meyer (68). She is the top selling female non-fiction Christian author of the last decade and has written over 90 books, and produced TV and radio programmes in 39 languages and in 200 countries.

An influential leader
Each year, Joyce conducts close to fifteen conferences (and has spoken at Hillsong Australia and many other churches), teaching practical principles from God’s Word. She has many loyal fans around the globe – from grannies all the way down the generational lines to teenage girls. They find Joyce warm, humble, funny, endearing and honest – traits not often associated with influential Christian leaders.

Her ministry has a strong social outreach focus (both nationally and globally) and – contrary to popular belief – Joyce gives substantial financial offerings back into various nation building projects.

The woman behind the ministry
Joyce was born in Missouri (a US state bordered by Kansas, Oklahoma, Tennesse, Kentucky amongst others) in 1943. Her father went into the army to fight in World War II soon after she was born, and upon his return, began sexually abusing her.

After a disastrous marriage just out of high school, Joyce Hutchinson remarried an engineering draftsman, Dave Meyer in 1967. Today the couple have four grown children and are still faithfully committed to each other and the ministry God has given them (Many people wrongly assume Joyce  heads up her ministry alone, but she is fully supported by her husband and they have a board of directors that oversee the projects she undertakes).

Though being born-again at age nine, Joyce drifted from her faith; but it was at 35 that Joyce believes she had an encounter with the Lord, “I didn’t have any knowledge. I didn’t go to church. I had a lot of problems, and I needed somebody to kind of help me along…One day as I was driving I heard God say my name. Later, I [felt His Spirit and love flowing through me].”

Joyce was a member of her local Lutheran Church, but later began leading a morning Bible class at a cafeteria and became active in Life Christian Centre, a charismatic church. Within a few years, she was the church’s associate pastor, where she gained popularity as a Bible teacher, and was asked to broadcast a 15 minute daily devotional programme on a local radio station.

Responding to critics
In 1985, Joyce stepped down from the pastoral team and founded her own ministry. In 1993, Dave suggested that they start a television ministry. With the TV exposure came intense criticism, as a spotlight was shone on her burgeoning bank account.
Responding to critics that admonish her wealthy lifestyle, Joyce has said, “there’s no need for us to apologise for being blessed…You can be a businessman, and people think the more you have, the more wonderful it is…but if you’re a preacher, then all of a sudden it becomes a problem.”

A dedicated humanitarian
Joyce has a heart for the poor and through her ministry has given the following in 2010 alone:
• More than 29 million meals served feeding over 6 000 children daily
• In St. Louis, over 243 000 meals to the homeless, disadvantaged children
• Free medical care to 236 000 people
• More than 1 100 children cared for daily in 45 children’s homes
• 16 new freshwater wells with over 370 built throughout India and other remote locations to date
• 200 000 prison gift bags and over 2 million distributed since 1998
• In Haiti, food, water and free medical care to over 150 000 including 100 new homes built; $9.4 million contributed to date for disaster assistance globally.

Discerning what we hear
Whether you like her style or not, no one can deny that Joyce loves Jesus and people. Her humanitarian efforts alone are awe-inspiring. Like any public figure, Joyce’s mistakes and theological musings have been laid bare for all to analyse. And as with all leaders, she must be held accountable for how she conducts her private and public lives.

I encourage JOY! readers to always pray about the books they read, the people they listen to, and the discussions they engage in. No one is going to get everything right (though we certainly aim for perfection). Let’s not judge ourselves by our intentions and others by their actions  – an unfair scale indeed.

Supporting public leaders
Let us as the Body of Christ love our own, give each other the benefit of the doubt and pray for leaders like Joyce Meyer, her family and her ministry.