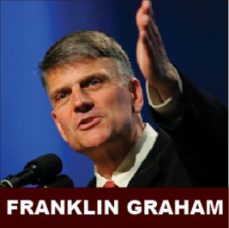 “[We are] infatuated with this false understanding of tolerance. To be truly tolerant is not to give every idea equal standing or to compromise the truth in the interest of keeping the peace.”
LEADER
Franklin Graham has devoted his life to meeting the needs of people around the world and proclaiming the Gospel of Jesus Christ. The eldest son of Billy and Ruth Bell Graham, he has served as President and CEO of Samaritan’s Purse since 1979 and as President and CEO of the Billy Graham Evangelistic Association (BGEA) since 2001.
Under his leadership, Samaritan’s Purse has met the needs of poor, sick, and suffering people in more than 100 countries. As an evangelist, he has led crusades around the world, starting with his first event in 1989. To date, he has preached to more than 8.1 million people as far afield as Japan and South Africa.
He has met privately with five US Presidents as well as world leaders from Europe, Africa, Asia and Latin America, and yet tries to live as simple a life as possible. Raised in a log home in the Appalachian Mountains in North Carolina, Franklin now lives in the mountains of North Carolina with his wife Jane. The couple have four children and ten grandchildren.
He was born into a heritage rich in Christian ministry. By the time of Franklin’s birth, Billy Graham was already known around the world as a spiritual leader, but he wasn’t the only spiritual giant in the family. Franklin’s maternal grandfather, Lemuel Nelson Bell, was a medical missionary to China for more than 20 years, a respected moderator of his denomination, the Presbyterian Church in America, and a co-founder and executive editor of Christianity Today, an American Christian magazine.
At age 22, after a period of rebellion and travelling the world, Franklin committed his life to Jesus Christ while alone in a hotel room in Jerusalem. Soon after that, Dr. Bob Pierce, founder of Samaritan’s Purse (and World Vision), invited Franklin to join him on a six-week mission to Asia. It was during that time that Franklin felt a burden to work with hurting people in areas of the world affected by war, famine, disease, and natural disasters; in his word: “I’ve been called to the slums of the streets and the ditches of the world.”
HUMANITARIAN
While his overt purpose when working in disaster zones is that of humanitarian aid, when questioned by the secular media, Franklin is clear about his true intentions:  “I believe as we work, God will always give us opportunities to tell others about His Son… We are there to reach out to love them and to save them, and as a Christian, I do this in the Name of Jesus Christ.”