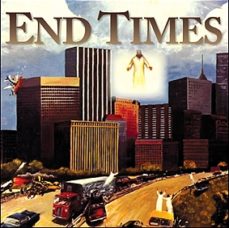 Many people are interested in eschatology in these troubled times. We were recently exposed to the misguided predictions of one Harold Camping and there is quite a bit of current speculation on what will happen in December 2012 (don’t expect me to comment on that). Consequently, there is a great need in the Church and Body of Christ to offer theological input and teaching in this area of (often confusing) Christian doctrine. However, I have learned something from early lessons in my preaching career – when I taught my congregation on Eschatology or ‘End Time Theory’ – and so I am not going to attempt to explain End Time theories in less than one thousand words!
Different aspects of Eschatology
Eschatology can be an intimidating subject. I encourage readers to get hold of good teaching material on the subjects of A-millennialism, Postmillenialism and Premillenialism as well as the pre-tribulation, post-tribulation, and mid-tribulation views of the Rapture. I would also suggest one studies the Biblical teaching on the Resurrection, Judgement and Millennium. Too often Christians have an End Time worldview framed by popular Christian fiction, Hollywood movies and flawed teaching. Consulting an accredited Bible school or sound theological reference books on the topic will be most prudent.

Division amongst Christians
That being said, End Time beliefs have often caused major rifts in Christian circles, but needn’t bring about such division. Irrespective of what your doctrine of the End Times is, or what interpretive scheme you have been taught, one thing is clear: in the end we will all stand before Jesus. He is both the beginning and the end (Revelation 22:13), He is the first and the last, and the focal point of eschatology.

Major Theological positions
It is impossible to cover all the theological positions in depth, but essentially: there are diverse opinions concerning the thousand years of peace (Millennium) described in Revelation and the events associated with it. Some interpret a literal, future, thousand-year time period in which Christ will rule over the Earth, a time which will be characterised by peace and harmony. Others understand a literal age of peace, but think the “thousand years” is a figure of speech. Still others see the Millennium as symbolic of a spiritual ideal, with no corresponding earthly condition.
All of these positions fall into the category of Millennialism, a broad term which includes any and all ideas relating to the Millennium of Biblical prophecy. The most commonly held viewpoints are usually categorised as follows:

A. Premillennialism
Standard premillenialism posits that Christ’s
Second Coming will inaugurate a literal thousand-year earthly kingdom. Christ’s return will coincide with a time of great tribulation. At this time, there will be a resurrection of the people of God who have passed away, and a rapture of the people of God who are still living. A thousand years of peace will follow, during which Christ will reign and satan will be imprisoned in the Abyss. Those who hold to this view usually fall into one of the following three categories:

1. Pre-tribulation Rapture
Pretribulationists believe that the Second Coming will be in two stages separated by a seven-year period of tribulation. At the beginning of the tribulation, true Christians will rise to meet the Lord in the air (the Rapture). Then follows a seven-year period of suffering in which the Antichrist will conquer the world and persecute those who refuse to worship him. During this period Jewish believers will take the place of the now absent church and re-instate the Old Testament sacrificial system in a rebuilt Jerusalem temple.
At the end of this period, Christ returns to defeat the Antichrist and establish the age of peace. This position is supported by Scripture such as, “God did not appoint us to wrath, but to obtain salvation through our Lord Jesus Christ,” 1 Thess 5:9.

2. Mid-tribulation Rapture
Midtribulationists believe that the Rapture will take place at the halfway point of the seven-year tribulation, i.e. after 3½ years.
It coincides with the “abomination of desolation” – a desecration of the temple where the Antichrist puts an end to the Jewish sacrifices, sets up his own image in the temple, and demands that he be worshiped as God. This event begins the second, most intense part of the tribulation.
Some interpreters find support for the “midtrib” position by comparing a passage in Paul’s epistles with the book of Revelation. Paul says, “We shall not all sleep, but we shall all be changed, in a moment, in the twinkling of an eye, at the last trumpet. For the trumpet will sound, and the dead will be raised incorruptible, and we shall be changed” 1 Cor 15:51-52. Those who hold this position on the Rapture believe that Revelation divides the great tribulation into three sets of increasingly catastrophic judgements: the Seven Seals, the Seven Trumpets, and the Seven Bowls, in that order. If the “last trumpet” of Paul is equated with the last trumpet of Revelation, the Rapture would be in the middle of the Tribulation. (However not all interpreters agree with this literal interpretation of the chronology of Revelation).

3. Post-tribulation Rapture
Posttribulationists hold that Christ will not return until the end of the tribulation. Christians, rather than being raptured at the beginning of the tribulation, or halfway through, will live through it and suffer for their faith during the ascendancy of the Antichrist. Proponents of this position believe that the presence of believers during the tribulation is necessary for a final evangelistic effort during a time when external conditions will combine with the Gospel message to bring great numbers of converts into the Church in time for the beginning of the Millennium.

B. Postmillennialism
Postmillennialists do not believe in a premillennial appearance of Christ. The postmillennial position is that the millennium began at the inauguration of Christ’s Kingdom reign when He ascended to His Heavenly throne and happens, not as a result of the coming of Christ, but as the global population converts to Christianity as a result of evangelisation. The age of peace is still a progressing work of divine grace, but without the visible presence of Christ to take the place of an earthly ruler. Christ will appear at the end of the millennium (the Second Coming) to lead His people into the Heavenly city, the New Jerusalem (ie. there is no rapture as the Bible does not teach this. There is only a  Second Coming, when Jesus returns).

C. A-Millennialism
A-Millennialists do not believe in a literal Millennium. The “thousand years” is an expression, a way of referring to the entire period from the first coming of Christ, two thousand years ago, until the future Second Coming. Many amillennialists believe that during this time period, the Church will continue to evangelise and grow as well as suffer decline in periods until Christ’s coming.

The judgement of believers
There are many Scriptures concerning Christ’s judgement of the saved and the unsaved but our focus is so often on the texts that have to do with what will happen to those who don’t know Jesus. I want to shift the focus for a moment to the judgement of believers, for Romans 14:10-12 states that we will all stand before God’s judgement seat. It is written: “‘As surely as I live,’ says the Lord, ‘every knee will bow before Me; every tongue will confess to God.’ So then, each of us will give an account of himself to God.”

A time to look forward to
The question is, “what will the judgement of believers be for?” There is ample evidence in Scripture that if we have been born-again of the Spirit into a relationship with Jesus then we have the assurance of eternal life with Him (Here are just three: Rom 8:16, Heb 6:18 and 2 Tim 1:12). So, if the final judgement of believers is not to decide who may enter Heaven, then what is it for?
Paul writes, “I have fought the good fight, I have finished the race, I have kept the faith.  Now there is in store for me the crown of righteousness, which the Lord, the righteous Judge, will award to me on that day  –  and not only to me, but also to all who have longed for His appearing.” 2 Tim 4:7-8.
What a wonderful thought! When we have finished our lives on earth we can enter eternity with the knowledge that it has all been worth it. Between this world and the next there is a judgement but, for the believer, it is the judicial determination of reward, not of penalty.

Spread the Gospel of salvation, hope and peace
The one who will judge us is the same one who said, “For God did not send His Son into the world to condemn the world, but to save the world through Him. Whoever believes in Him is not condemned…” John 3:17-18. Those who have believed in Jesus for salvation will stand before Him. He who shed His Blood for us will evaluate our lives and reward us accordingly (2 Cor 5:10). This gives me great comfort and hope.
Yes, the world is getting more and more chaotic by the month. Yes, there is a sense of an approaching apocalypse. And yes, we will all stand before the judgement seat of Christ. But the good news is that it is Jesus who judges. 