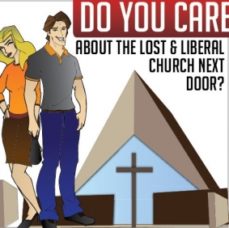 Overall, the church worldwide and in South Africa is in a crisis of spiritual decay – and if that decay is to be stopped and reversed, major changes are needed in terms of repentance and action. That can be proven by the pattern of:
• Postmodern doctrinal drift from Biblical truth
• The epidemic of what, in previous generations, was considered scandalous behaviour  in congregations and leaders
• The replacement of Biblical authority ­either with individual relativism or the fascist ­authoritarian personalities and their cult followings
• Numbers: fewer educated people are attending church at all, and while attendance may be good amongst the poor, pastors are increasingly having their time consumed with HIV related funerals – making one wonder how many of these church-goers are truly converted?
Recognising sin in the church
While sexual sin can often be hidden, the epidemic of divorces and broken families cannot. Nevertheless, listen to the leaders of just about any church and you will not hear this message.  The message and attitude you hear from just about every side, whether a healthy church or not is that, “Overall, we are doing well. We have a few problems we are working to sort out”.
So the question is then, how did churches reach this disconnection about their self-perception? When your church says “We are doing well”, I ask who is the “we” and by what standard do they evaluate “well”?
1. Denial
Unhealthy, backsliding churches are generally in denial about their regression and their leaders get very angry if anyone points out their sin. They can usually find something to highlight which indicates they are doing well. Maybe their attendance has increased, maybe church offerings are doing better; perhaps they have just learned some new truth from the Scripture (while neglecting more important issues).
So “well” gets redefined to exclude central moral behaviour and doctrinal drift. For Biblical individuals in these churches, the problem is that “we” is defined to include all the unbiblical people as well. So they get defensive, rather than doing something to challenge others. “How dare you criticise us!’”
2. Hiding sin
As individuals, backslidden Christians generally hide their sin and if it becomes obvious, they drift out of the church. If they recover, they return to a different church. Their old church generally doesn’t follow up, let alone discipline them. The new local church, if they know about the sin at all, can always blame the backsliding and sin on the other church, relinquishing all responsibility.

3.Out of sight, out of mind
When a church backslides (generally), the godly people get fed up and move to a ‘healthier’ church. Then the old church is no longer part of “we” and is left to backslide further. The former members generally have no interest in the spiritual health of the church they left.
4. Competitive attitudes
Leaders of healthy churches and denominations, unfortunately tend to take “we” as meaning other healthy churches like theirs.
If unhealthy churches lose members to Biblical churches, the attitude of most healthy church leaders is: “We win, they lose, let them decline more and their members can move to us”.
An exodus from traditional churches
In the 1980s and 90s, the Evangelical mainline denominations such as the Presbyterians, Methodists, Dutch Reformed and Anglicans began to be infiltrated with modernist liberalism. There was an exodus of young people to newer churches, which were mostly Charismatic in their expression of the Holy Spirit.
Whatever one believes about the gifts of the Holy Spirit, the Charismatic churches at the time were uncompromising on teaching the authority of the Bible for all matters of personal conduct and doctrine.
There was no compromise, debate or softened stance on homosexuality, abortion, adultery, pornography etc. The doctrine of the virgin birth, eternal punishment, Jesus as the only way, were accepted and not questioned. The problem (at that time) was that the healthier, new churches saw the mainline denominations as competition rather than as brothers needing help.
Charismatic churches in trouble
Today, most of those same Charismatic denominations founded in the 1980s are in spiritual decline either to postmodernism, personality cults, prosperity teaching etc – even though many continue to grow numerically.
Out of the mess, new denominations have sprung up, which are often more healthy – but for how long until they follow the same path? The new churches gain members leaving the older declining ones and generally show no interest in helping to arrest these wayward churches’ spiritual decline. They will generally not challenge sin or doctrinal compromise even if they know about it.
Finding things to argue about…
A development of the new millennium is the rise of the ‘new Calvinism’, partly Charismatic and partly not, which is experiencing a revival of Biblical expository preaching.
Generally, the ‘new Calvinist’ leaders are unconcerned about their non-Calvinist sister Churches which are in spiritual decline – at best they ignore them and at worst are happy about the decline, because people move to their churches.
The overall problem is not about Charismatics versus Cessationist, or Mainline versus New Networks, or Calvinist versus Arminians, or those in between – really these divisions are not central to the Gospel. Core doctrinal truths about hell, one way to Heaven through Jesus and moral behaviour like sexual purity and the sanctity of life are the essentials.

Support your neighbouring church
Right now numerous denominations are teetering on the edge of falling into liberal postmodernism or fascist authoritarianism. Will you pray for them? Will you speak up for truth to leaders of straying churches who forsake and struggle with doctrinal issues?
Will you support people in those churches who speak up? Will you help to mentor godly leaders? If you don’t, your church could be the next one to go into decline and then will there be anyone to help rescue your church?
Please care about the church next door. They are not part of “them” but “we”. 