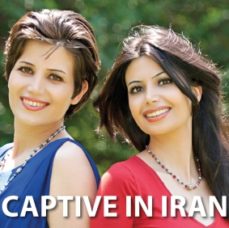 Maryam Rostampour and Marziyeh Amirizadeh were born into Muslim families in Iran. They met while studying Christian theology in Turkey in 2005, and realised they had become Christians at about the same time six years earlier. Deciding to join forces, they returned to Iran and began a program of mission outreach, handing out Farsi New Testaments and starting two house churches in their apartment, one for young people and the other for prostitutes.

Arrested, interrogated, imprisoned
They extended their ministry with mission trips to India, South Korea and Turkey. In 2009 they were arrested for promoting Christianity – a capital crime in Iran –  and imprisoned for 259 days in the city’s notorious Evin Prison in Tehran, a place where inmates are routinely tortured, and executions by hanging are swift and sudden. They were interrogated, intimidated by their captors, held in solitary confinement, and given a death sentence. However, instead of succumbing to fear, Rostampour and Amirizadeh chose to take the radical – and dangerous – step of sharing their faith inside the very prison meant to silence them.

Sentenced to die
The official charges were apostasy, anti-government activity, and blasphemy, for which they were sentenced to execution by hanging. As many around the world prayed for their freedom, and as a result of international lobbying, Rostampour and Amirizadeh were released in 2009 and cleared of all charges the following year. After their release, they immigrated to the United States as refugees. The ladies were recently in South Africa on a speaking tour promoting their autobiography, ‘Captive in Iran’, and speaking to various churches and Christian groups about the daily, daunting, persecution that believers, and especially women, face in Iran and the Middle East. JOY! Magazine caught up with them to find out more…

Ladies, having fled Iran and leaving behind all that you know and love, what does daily life look like today, in a foreign Western nation?
Marziyeh: Life in America is certainly worlds apart from what we know. It has its blessings and also its hardships, but I can truly say I am looked after by God.
I am currently studying International Law and working on my second book, which is about women under pressure because of Islamic laws. Maryam and I experienced firsthand the persecution and challenges in Iran, but here in the States we have our own battles – for instance, when we came over, we did not have social security numbers, which meant that we did not have basic access to services; we couldn’t see doctors because we didn’t have the necessary paperwork…it was a very testing time.

Maryam: I am not married and have no children, nor does Marziyeh. From the first day we moved to America, we had logistical and legal difficulties –  as we were not working with any specific organisations. We are completely independent and started our lives as refugees, from nothing.
We prayed and asked the Lord to help us with work, which He did – and we began helping with interpreting services for the refugees. We were using food stamps to survive and making jewellery from home, which we managed to sell. Though we did connect with various Christians, some of the churches and missionaries were trying to use our voice in a way we didn’t like; they were placing us in positions to  “sell” our story, which we found distasteful. This is not a publicity project – it is our life. We decided to trust God and after the opportunity came to publish the book, we have had several speaking engagements and have been able to sustain ourselves through the book sales. We have also been able to study further through financial aid and scholarships. It has not been easy, but we are tough and we serve a strong God who helps us.

You are rebuilding a new life, without the support and proximity of your beloved family. How do you stay faith-filled and positive?
Maryam: Our life has many ups and downs; yet we are sure God has a plan; our lives are in His hands. It is not about our comfort; we trust His plans and His purpose. We have settled into a local church and made some good friends here. There are some lovely people (believers) who have tried to help us to understand and adapt to the culture in America. Every day has been a miracle of survival. A lovely couple gave us their apartment to live in rent-free for two years and that has been a big relief.

Marziyeh: Iran is our home and we love our country, but these days, we can’t go back and we have to look forward. If Iran became free, we would love to go home…and we hope that day will come. We don’t know what the future holds but He does…The Lord spoke to me in a dream where He told me that I need to be in America, so I must have peace.

What is Iran like today? Is it better under new leadership? The Western media seem to think so…
Maryam: Conditions have not changed at all since Ahmadinejad left and the new leader took over. The Western media have often proclaimed how moderate he is, but we believe It is just a mask and pretence. We believe the persecution of people in general has not changed and is even worsening. The number of people executed  is higher under the new president – he is deliberately misleading the West!
As a result, the younger generation is rebelling and pushing back. The government censors the internet, but people are finding ways around it. Many of the posts for freedom on Facebook have helped the Iranian people and social media definitely helps to further the cause of the oppressed Iranian women.

How often do you see your family? Are you able to return to Iran?
Marziyeh: My family still lives in Iran. We are concerned about the condition of their lives. After publishing the book, the Iranian government threatened our families, but we are hoping to bring them out to safety because the government wants to silence them. Fortunately, because of the publicity following my book, the authorities have kept their distance. Sadly, though we haven’t been able to see them and all our calls are monitored.  I don’t think we would be able to go back there without risking re-arrest.

How can people in the Western Church help women in Iran and other persecuted believers?
Maryam: We both believe there are many ways that Christians living in free countries can support those living under persecution. People have no freedom – they cannot choose how to think or worship God. There is no freedom of speech for those in Iran. They may end up in jail if they say anything against the government; we have seen many injustices and innocent people imprisoned. The government imprisons doctors, lawyers and journalists amongst others. We need to educate people. We can support the prisoners, through prayer and raising awareness of their conditions through campaigns. Prayer is great – Christians in Iran can feel the power of our prayers.

Practical offers of support
There are also practical ways to support them: sending letters to prisoners, working with Open Doors, posting on Facebook or Twitter – there are many ways to put pressure on the government. Travelling outside of the country helps to broaden your horizons. Other ways people can help include speaking in churches and raising awareness of conditions in Iran. People can purchase our book, which helps with our income and enables us to assist those still in Iran. Leaving our country was a burden, but we feel we are giving a voice to the people who are unable to speak out…and we have distributed 20 000 Bibles in Iran.
How do you feel about the future of Iran? Do you have hope?
Marziyeh: I remember when I was in prison and I could see every day how our young generation were suffering, my heart was really broken. I was praying and asking God why people are suffering every day; asking God when will it be finished in Iran and when will we have freedom?
God spoke to me in the dream. He told me, “I am giving the cruel people time to come back to me, to repent, to confess their sins. Otherwise I have to punish those cruel people”. I saw that God has His timeline. We want our freedom fast, but God is gracious and gives people time to return to God.

Maryam: We are praying for our country; for a change in leadership. We hope to see our country free, with people able to serve God freely. We pray for our families. I believe that we can see it (the freedom of Iran) one day in our lifetime. If you look at what is happening in the news, the Iranian people are tired of the Islamic rules. They are so receptive and hungry for the message of salvation. God is good and His will triumphs.