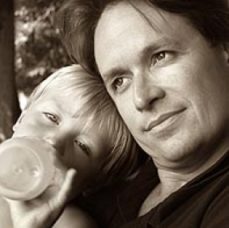 Dad – More Than Just a Breadwinner

UNTIL FAIRLY RECENTLY, FAMILY AND parenting literature tended to idolise motherhood and dismiss fatherhood. However, “the recent shift in family research [is] toward the perception of fathers as major contributors to both child and adult development” (Mary Pickard, 1998).  Society is finally waking up to the fact that fathers are vitally important to the healthy development of their children. Their role goes far beyond the traditional stereotype of the father as the breadwinner.
Research shows conclusively the benefits for children of healthy father-child relationships. According to George Rekers, Professor of Neuropsychiatry and Behavioural Science, Research Director for Child and Adolescent Psychiatry, and Chairman of the Faculty in Psychology at the University of South Carolina School of Medicine, a positive and continuous relationship to one’s father has been found to be associated with a good self-concept, higher self-esteem, higher self-confidence in personal and social interaction, higher moral maturity, reduced rates of unwed teen pregnancy, greater internal control and higher career aspirations. Fathers who are affectionate, nurturing and actively involved in child-rearing are more likely to have well-adjusted children.
The devastating consequences of unhealthy father-child relationships are equally well documented. In boys, the absence of the father has been linked to both increased aggressiveness and increased femininity. Maritsa van Loggerenberg, a social worker at St Albans Maximum Security Prison in Port Elizabeth, estimates that perhaps as many as 90 percent of all the inmates she works with grew up without a father figure.
Although the media often focus on the negatives, the past few decades have also witnessed some positive changes in the way the father’s role is perceived.

The traditional image of a father as an emotionally distant breadwinner and a strict disciplinarian has given way to a father figure who has a nurturing role to play in raising children. As Christians, we applaud and embrace this positive shift.
The Word of God never reduces fathering to a single function or a single metaphor, but it does highlight some important roles fathers need to embrace. I would like to touch on five of these.

The Dad as life coach
Instruction, especially of sons, is also a father’s responsibility. Fatherly instruction includes teaching children the ways of God, Deut 6:4-9, but it should also include training in practical life-skills—good manners, work ethics, moral values, relating to women, family finance and business acumen. (See Prov 1-9) Fathers need to be life-coaches.
The modern pitfall is for fathers to hand over their coaching role to the Church, the school or even the television. Feeling hopelessly ill-equipped to serve as ‘life-coaches’, we leave it to the ‘trained professionals’. But in so doing, we fail to realise that to our young children, we are almost like God. Your daughter hangs on every word you speak. Your son believes everything you tell him.
To your children, you speak with authority second only to God’s. God ordained it this way because He has given you the role of ‘life-coach’.
Some fathers confuse coaching with criticising. I remember watching a television interview with a world-class sportsman. When he was a child his father drove him relentlessly to improve. After each school match his father would take him to the park, point out every mistake he had made and drill him until sunset practising to do better. “Most boys get butterflies in the stomach before the game; I got them afterwards,” he recalled. “Facing my father was more stressful than facing any opposing team.” God calls us to be coaches, not critics—to build up, not to break down.

The Dad as encourager
Every boy longs for his father’s affirmation, every girl for his approval. Mom is a sure thing. Her approval is easy to attain. But dad…his is harder to come by, and how we yearn for it. As a boy, I desperately needed my dad to be proud of me. I lived with the sense that he was—and it filled me with courage and confidence. A close friend of mine, too, longs for her father to tell her she’s beautiful and he’s glad she’s his daughter. She’s never sensed his unconditional, wholehearted approval and acceptance—and how her heart aches for it.
John Eldredge, author of ‘Wild at Heart’, believes every boy needs his father to tell him that he has what it takes to make it as a man; every girl needs him to tell her that she’s beautiful, worthy to be loved. If they don’t get this affirmation from him, they’ll seek it elsewhere, often with devastating consequences.
No matter how old we are or how far we’ve drifted from our fathers, we still yearn for their approval. A Spanish father’s relationship with his son had become so strained that the boy ran away.  His father set off to find him. He searched for months, but to no avail. Finally, in a last desperate effort to find his son, the father put an advert in a Madrid newspaper. The ad read: “Dear Paco, meet me in front of this newspaper office at noon on Saturday. All is forgiven. I love you. Your Father.”
At noon that Saturday, 800 Paco’s showed-up seeking their father’s love and approval!
Part of a father’s God-given mandate is to affirm his children. We must let our sons know we’re proud of them—they’re the best sons in the world and they have what it takes to be real men. Let’s make our daughters feel like princesses, beautiful and worthy of pure love.

The Dad as law enforcer
Discipline is an aspect of a father’s love that our generation is in danger of losing. My pastor recently returned from a visit to the UK shocked by the lack of discipline among the children.  The Bible says, “He who loves his son is careful to discipline him.” Prov 13:24.  As loving fathers, part of our role is to establish and enforce appropriate rules. As much as it tears at our hearts—and it should—failing to discipline our children will break our hearts later.   After years of dealing with rebel teenagers, the police department in Houston drew up a list of ‘Rules for Raising Delinquent Children’. The list included…
Begin with infancy by giving the child everything he wants. In this way, he will grow up to believe the world owes him a living.
When he picks up bad words, laugh at him. This will make him think he’s cute. It also will encourage him to pick up other phrases that will blow off the top of your head later.
Pick up everything he leaves lying around—books, shoes and clothing. Do everything for him so he will be experienced in throwing all responsibility onto others.
Let him read any printed matter he can get his hands on. Be careful that the silverware and drinking glasses are sterilised, but let his mind feast on garbage.
Take his part against neighbours, teachers and policemen. They all are prejudiced against your child.

We must reject cruel, ruthless, authoritarian discipline, but if we neglect appropriate discipline we fail to love our children God’s way. Children flourish when their father loves them enough to set Godly boundaries and enforce them with care and consistency.

The Dad as companion
Given a choice, our children will take time with dad over toys. They want us more than our gifts. And let’s not fool ourselves—quality time means quantity time. Quality moments happen naturally when we set aside time just to spend with our children. Charles Francis Adams, the 19th century political figure and diplomat, kept a diary. One day he entered: “Went fishing with my son today—a day wasted.” His son, Brook Adams, also kept a diary. On that same day, Brook wrote: “Went fishing with my father—the most wonderful day of my life!” Time spent just being with our children may feel like time wasted, but eternity may show it be the investment of time that yields the greatest of all returns.
A study at Cornell University showed that the average father spends 38 seconds per day being totally attentive to his children’s needs and about 20 minutes a day being partially attentive. The same children spend 54 hours per week watching television. Another study indicated that the average church-going teenager spends only two minutes per day in dialogue with his/her father. Twenty-five percent of these same teenagers say they have never had a meaningful conversation with their father, that is, a conversation that focused on their interests.
Our children need us to be there for them—to listen to them, to laugh with them, to just be with them. They need us to say, by the way we invest our time, that they are our highest priority, more important than the newspaper, the garden, the rugby, than work or even than church activities.
I have only touched briefly on the Biblical role of a father. I could have added many other facets—the father as protector, provider, prayer-warrior—but if we as fathers embrace these five roles, what an investment we shall make in the lives of the children God has entrusted to our care.