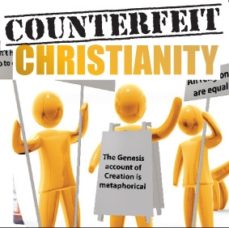 The fastest growing religion in the world today is not Islam, Buddhism, or any of the New Age religions. In the 21st Century it is Counterfeit Christianity, with over two billion people on earth today claiming to be Christians. Many of them do not have the slightest notion of what it means to be a Christian. They may look like Christians, talk like Christians, but are not Christian at all.

But how do we distinguish between the fake and genuine follower of Christ? In order to detect a counterfeit Dollar bill, Special Agents from the US Treasury Department study the genuine Dollar note until they are intimately familiar with every facet and detail of the currency.

Once the genuine article is imprinted in their minds – it is easy to detect the counterfeit. Similarly, in order to detect genuine followers of Christ, we must examine ourselves through the prism of God’s Word.

We need to know the Scripture
We must be so familiar with the Scriptures that whenever we stray from the Truth.  Conviction and the knowledge of God’s Word brings us right back! James 1:23–25, declares: “For if anyone is a hearer of the Word and not a doer, he is like a man observing his natural face in a mirror for he observes himself, goes away, and immediately forgets what kind of man he was. But he who looks into the Perfect Law of Liberty and continues in it, and is not a forgetful hearer but a doer of the work…”

A follower of Christ is one who has repented of his sins, turned from his wicked ways and commits the rest of his natural life to walking in total submission to God’s Will and in obedience to His Word.
By that definition alone – a significant percent of people claiming to be Christian are disqualified.

It’s not just about one’s words
Jesus warns in Matthew 7:21: “Not everyone who says to Me, Lord, Lord, shall enter the Kingdom of Heaven, but he who does the Will of My Father in Heaven. Many will say to Me in that day, ‘Lord, Lord, have we not prophesied in Your Name, cast out demons in Your Name and done many wonders in Your Name?’ And then I will declare to them, ‘I never knew you; depart from Me, you who practise lawlessness’.” What is God’s Will for your life? His Word! And God’s Word is God’s Law. So when we live in wilful disobedience to God’s Word – we transgress God’s Law.

Appearances are deceiving
Because outward appearances are deceiving, the difference between a genuine follower of Christ and the counterfeit Christian is not easily detected. However, the Bible provides instruction to help us easily discern between the two. Paul, warning about those who have strayed from the truth writes in 2 Timothy 2:19: “Nevertheless, the solid foundation of God stands, having this seal; The Lord knows those who are His and let everyone who names the Name of Christ depart from iniquity.”

Major deceptions in the world
The Scriptures are clear, not only is Jesus aware of the impostors, He also knows His true followers. In 2 Timothy 3:12–14: Paul warns and encourages Timothy: “All who desire to live Godly in Christ Jesus will suffer persecution.  But evil men and impostors will grow worse…deceiving and being deceived. But you must continue in the things which you have learned and been assured of…”

Tragically, many Christians are not heeding the warning of Scripture today and are straying from the Truth. Let me share some of the major deceptions in the Christian world that are causing millions to depart from God’s Word and follow man-made doctrines, fables and opinions:

The deception of celebrity worship
Millions of Christians are unwittingly following the standards of this world system through celebrity worship. The media is the primary conduit through which men and women are exalted to godlike status causing Christians to ignore the Word of God and slavishly follow the word of man. I investigate every friend request I receive on Facebook to ensure they are a Christian.
I am often shocked to read their profiles: ‘I love Jesus’ and ‘I love Lady Gaga’. How a Christian can claim to love the holy and sinless Son of God and a depraved individual like Lady Gaga is a mystery to me. Many Christians believe Barack Obama is a Christian because of his media-created star power. In fact, 1 in 4 pastors in the US believe Obama is a follower of Christ even though he works diligently to promote the murder of the unborn and advance the homosexual agenda around the world.

Another global celebrity leading many Christians astray is Archbishop Desmond Tutu who states “the Dalai Lama will go to Heaven because he is a good man.” Apparently, the Cross of Christ is inconsequential. Tutu also claims “homosexuality is a gift of God.” Many Christians adore Tutu and follow his false gospel. It is a known fact that the people you idolise have the most influence in your life. Millions of Christians today see no contradiction in claiming Christ while standing in agreement with evil.

Being unequally yoked
The intoxicating allure of the celebrity completely blinds them to the warnings of Scripture. “Do not be unequally yoked together with unbelievers, for what fellowship has righteousness with lawlessness? And what communion has light with darkness? And what accord has Christ with Belial? Or what part has a believer with an unbeliever?” 2 Cor 6:14-15

Deception of man-made doctrines
Rob Bell, a mega-pastor and tech-savvy marketer espouses a doctrine of salvation without damnation. Bell argues that everybody who ever existed will go to Heaven because God’s love cannot send anybody to hell. Universalism preaches that there is truth in every religion. And because all truth emanates from God, all religions must have some part of God’s Truth. Consequently, everybody goes to Heaven. This false doctrine is already laying the foundations for the One World Religion.

Millions in the ‘Emerging Church’ movement have bought into this deception and are being led astray by leaders who have clearly rejected God’s Word and replaced it with their own false doctrines. Jesus explains the parable of the Tares in Matthew 13:41: “The Son of Man will send out His angels, and they will gather out of His Kingdom all things that offend, and those who practise lawlessness and will cast them into the furnace of fire, there will be wailing and gnashing of teeth.”

The deception of man’s opinion
A new and dangerous movement called Chrislam is growing overseas.
Chrislam is an attempt to synchronise Christianity with Islam. While it began in Nigeria in the 1980s, Chrislamic ideas have spread throughout much of the world. The fundamental concept of Chrislam is that Christianity and Islam are compatible, that one can be a Christian and a Muslim at the same time. Chrislam is not formally a religion of its own, but rather a blurring of the differences and distinctions between Christianity and Islam.

Some Protestant churches, are promoting this merging together of Islam and Christianity. The problem with this man –  driven initiative is that Islam rejects Jesus as the Son of God who died for the sins of the world. And Jesus’ Crucifixion, Resurrection and Supremacy are central to the Christian Faith. Although Christians agree with Muslims on many moral issues, there is no compatibility with Islam on the central tenets of the Christian Faith. Altering the Bible to win converts to Christ is heresy. Peter preaching about Jesus to the Sanhedrin declares in Acts 4:12: “Nor is there salvation in any other, for there is no other name under Heaven given among men by which we must be saved.”

The deception of love
An increasing number of Christian leaders are being led astray by the deception of love. This deception argues that “as long as you have love, you are pleasing God.” Love (or rather the world’s definition of love) contends that ‘loving and committed’ homosexual relationships must be acceptable to God because He is love. Also, where love exists, God exists. This deception is gaining much ground in the world today because it allows people to advance all manner of evil under the guise of love. Fornication is mostly justified by using this argument.

The deception of good works
Many of the mainline denominations refuse to preach the Gospel of repentance from sin and faith in Jesus Christ preferring rather the social gospel of good works and serving others. God is love, He is also perfectly just and holy. The God-kind of love therefore cannot be equated with sexual depravity or any other sinful behaviour.

In fact, God’s love causes us to repent from sin – not justify it! If the gospel you are preaching does not begin with repentance from sin and turning to God – it is not the Gospel of Jesus Christ at all. “Or do you despise the riches of His goodness, forbearance, and longsuffering, not knowing that the goodness of God leads you to repentance.” Rom 2:4

The deception of stupidity
Churches are springing up all over Europe headed by priests who do not believe there is a God! Many churches do not believe in the Virgin Birth or the Resurrection of Jesus. As the BBC reports, “some church leaders in the Netherlands want to transform their small nation into a laboratory for rethinking Christianity – experimenting with radical new ways of understanding the faith.”

Religious Affairs Correspondent Robert Pigott tells of Rev. Klaas Hendrikse, a minister of the PKN, the mainstream Protestant denomination in the Netherlands: “Pastor Hendrikse doesn’t believe in life after death, or even in God as a supernatural being. He told the BBC that he has “no talent” for believing historic and orthodox doctrines. “God is not a being at all,” he says, but just an experience. Furthermore, as Pigott reports, “Mr. Hendrikse describes the Bible’s account of Jesus’ life as a mythological story about a man who may never have existed, even if it is a valuable source of wisdom about how to lead a good life.”

By any normative definition of Christian belief, Klaas Hendrikse is an unbeliever, but in the largest Dutch denomination, he is considered a minister in good standing. As a matter of fact, he is not even unusual. A study undertaken by the Free University of Amsterdam determined that about one in every six Protestant ministers is either agnostic or atheist!
All of the above deceptions are leading people away from the one true Faith of our Lord and Saviour, Jesus Christ. Most of the people advocating these ideas are well intentioned – but as many of you are aware – the road to hell is paved with good intentions. Many pastors of large and successful churches are preaching a feel-good gospel designed to make congregants comfortable. Christians who constantly hear the message of grace and how to live your best life, etc, tend to believe the Christian walk is all about them and their comforts. God is not so much interested in our comforts as He is in our nature being transformed to that of Christ’s.

Know what you believe and why
“Preach the Word! Be ready in season and out of season. Convince, rebuke, exhort with all longsuffering and teaching. For the time will come when they will not endure sound doctrine, but according to their own desires, because they have itching ears, they will heap up for themselves teachers;  and they will turn their ears away from the truth, and be turned aside to fables.” 2 Tim 4:2.

The most important task of following Christ today is to know what you believe and why you believe it. Without a solid grounding in God’s Word you can easily stray from the truth. The responsibility to fill your mind with the knowledge of God rests squarely on your shoulders. 