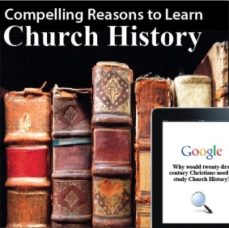 Why would twenty-first century Christians, who can read the Bible for themselves and attend Bible-believing churches, need to study Church History?”
I’ve heard this kind of question phrased a number of ways over the years. Sometimes people ask it with a tone of sincere curiosity: “Isn’t the Bible sufficient for all matters of faith and practice? Are those people from Church history even relevant to our modern world? What can they tell us that isn’t already in the Bible for anybody with eyes to see and ears to hear?”
Other times people ask with a tone of incredulity, even hostility: “Won’t dwelling in the past keep us from looking to the future? Isn’t it dangerous to read all those Roman Catholics? Didn’t the Church fall away from the Bible soon after the apostles? Don’t we believe in Scripture alone as the source of our theology?”

Embracing Church history
As a professor of theology who has consciously injected a large dose of historical reflection into my Biblical, doctrinal, and practical instruction, I’ve found it necessary to ready myself with a number of important reasons for looking into the rear-view mirror of Church history as we seek to drive forward into the future.
I’d like to share with you three reasons why every Bible-believing Christian should not merely give Church history an occasional nod of respect, but embrace it as a critical component of a wise, balanced Christian life and ministry.

1. Learning Church history will cure our ignorance of the past
Too many evangelicals are walking around in a constant state of what we might call ‘duja vé’. No, not ‘déja vu’—you know what that is: the odd feeling that this has happened before. ‘Duja vé’, on the other hand, is just the opposite: it’s that nagging feeling that none of this has ever happened before.
The truth is, throughout the Church’s history Christians have pretty much dealt with every kind of doctrinal and practical challenge you can imagine.
Ecclesiastes 1:9–10 puts it this way: “What has been is what will be, and what has been done is what will be done, and there is nothing new under the sun. Is there a thing of which it is said, ‘See, this is new’? It has been already in the ages before us.”
Historical perspective helps
Let me give an illustration. As a young believer, I was a member of a small church in northern Minnesota. As you might expect,  conflict sometimes flared up in such a small community. On one occasion the subject of church music came up, centred on the question of the use of various instruments like guitars and drums.
In our church only the piano was used in Sunday morning worship. One older man in the class spoke up in a deep, gruff voice, ranting against the use of anything but the piano in worship and complaining about “that satanic beat” of modern music using drums.
In his mind, using instruments associated with contemporary secular music would be selling out to “the culture.” But a little historical perspective would have helped.

Ignorance causes disputes
Most people who resist musical changes to the worship service fail to acknowledge that every style of music and musical instrument has, at some point, been adapted from the surrounding culture.
When great hymn writers like Isaac Watts and Charles Wesley wrote their now classic hymns, many church leaders rejected their songs because they believed Christians should sing only the inspired and inerrant Psalms. Instruments like the piano, violin, and even the organ were all initially rejected for Christian worship because of their associations with secular music.
In order for Christians to make wise decisions, they must be able to draw from a depth of historical knowledge. In short, learning Church history will cure our ignorance of the past.

2. Learning church history will curb the arrogance of  our present
Some evangelicals could very well define “Church history” as “the study of how everybody misinterpreted the Bible until we came along.”
On several occasions I’ve heard people actually say: “I don’t care if I’m the first person in history to read the Bible this way. If that’s what Scripture says, then I’m going to accept it.” We should admire this confidence in Scripture, but that statement places a lot of unquestioned confidence in one’s own abilities to properly interpret the Bible.
Snobbery of the Scriptures
Don’t get me wrong. I believe in the sufficiency of Scripture, but I don’t believe in the sufficiency of self.
The kind of arrogance that makes a person completely abandon the contributions from the past is what CS Lewis called “chronological snobbery,” which he defined as “the uncritical acceptance of the intellectual climate common to our own age and the assumption that whatever has gone out of date is on that account discredited. “
“You must find why it went out of date. Was it ever refuted (and if so by whom, where, and how conclusively) or did it merely die away as fashions do? If the latter, this tells us nothing about its truth or falsehood.”

Don’t blindly reject history
Men often look back over their lives and reflect on how far they’ve come and the progress they’ve made. But poet Thomas S. Jones presents the opposite perspective: “What if the younger version of me were to peer forward and see what kind of person I have become?” He mused:
“Across the fields of yesterday
He sometimes comes to me,
A little lad just back from play,
The lad I used to be.
And yet he smiles so wistfully
Once he has crept within,
I wonder he still hopes to see
The man I might have been.”
Those words haunt me. I often wonder what the bygone generations of Christianity might think if they could peer “across the fields of yesterday” and see what had become of the faith for which they lived and died.
I constantly ask myself: “If the Church fathers or Protestant Reformers were to show up at my church, would they worship…or run?” Sometimes I see such a pitch of “chronological snobbery” in many of our avant-garde churches that I wonder if we would purposely drive them off…then brag about having done so.
Understanding the present
Studying Church history will help evangelicals understand their place in that history. It will help them see that their particular church tradition (with all its idiosyncrasies) is a flawed but valid part of something much bigger than themselves.
They will realise that their present form of Christianity is itself a period that will one day be left in the past. They will be humbled by the moving testimonies, passionate ministries, and sacrificial devotion of the saints of old. The result? Church history will curb the arrogance of our present.
3. Learning Church history will conserve the faith for the future
The Lord’s brother, Jude, urged Christians “to contend for the Faith that was once for all delivered to the saints.” Jude 1:3.
The Greek verb translated “delivered” refers to a sacred trust or tradition. Paul described this tradition as he handed it down to the Corinthians: “Now I would remind you, brothers, of the Gospel I preached to you, which you received, in which you stand…For I delivered to you as of first importance what I also received.” 1 Cor 15:1,3.
Jude used the same language as Paul did for receiving the tradition and sending it forward to the future. In this case the things “received” and “handed down” were the central truths of the Christian Faith.

Conveying the timeless Message
Paul also wrote letters to his younger disciple, Timothy, for the purpose of
encouraging the next generation to faithfully convey the core Christian tradition into the future.
Paul wrote, “Continue in what you have learned and have firmly believed, knowing from whom you learned it.” 2 Tim 3:14. He also said, “What you have heard from me in the presence of many witnesses entrust to faithful men who will be able to teach others also.” 2 Tim 2:2.
By observing what our spiritual forefathers fought to preserve and pass on, we come to understand and appreciate the need to continue the pattern established by 2 Timothy 2:2. By looking back, Christ-ians today can learn how to conserve and convey the timeless message through time-tested methods.

Make disciples
Today the Christian Church is facing numerous serious crises directly related to their inability to make disciples who are passing the Faith on to the next generation.
To put it bluntly: Christians today are dropping the baton, but still running the race! According to a 2006 Barna Group study, 40-50% of kids who were “equipped” in church youth groups walk away from the faith or the church in their college years. Study after study shows that evangelicalism itself is shrinking in America.
Mega church and multi-site ministries mask the problem, as far too many of those big box churches grow in number by primarily syphoning believers from elsewhere and systematically weakening smaller churches…not by converting the lost or restoring the un-churched.
This kind of model of ministry is simply unsustainable. In many respects, American Christians are simply failing to pass the Faith on to the next generation. Unless this trend is halted, the disaster could be epic.

Church history
The incredible challenges we’re facing today aren’t new. Pluralism, cynicism, paganism, immorality, political corruption, war, persecution, social unrest, atheism, scepticism, and me-theism—the early church thrived in that kind of culture. But today we’re doing all we can to simply survive.
As we look back at the history of the Church, the pre-modern models and methods of evangelism, catechetical instruction, initiation, and life-long discipleship can help us
re-think how we face the current challenges in our increasingly post-modern, post-Christian world. It’s not too late. By learning Church history we can rediscover and restore wise and effective ways to conserve the Faith for the future. 