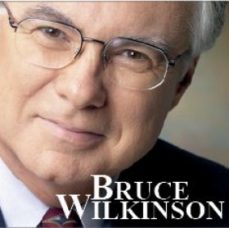 Dr. Bruce Wilkinson is known to millions of people all around the world as a dynamic and anointed speaker and author. His heart is touched by the needy of the world, and he has been involved in pioneering many organisations that increase the level of Biblical teaching and giving exponentially.
We got to chat to Bruce and find out more about what enriches his life, and his upcoming plans…

Bruce, what a pleasant surprise to hear you are engaging with
Africa again. What has kept you busy since your last ministry season in Africa?
In addition to lots of time with family and friends, I’ve focused on four different areas of ministry. Firstly, writing new books (such as ‘You Were Born for This!’) and developing new Bible teaching courses. Secondly, I’ve continued ministering at local churches, pastor conferences, business, leadership conferences and universities etc.
Thirdly, I’ve been helping to raise funds for Christian organisations, churches, colleges, seminaries and humanitarian groups. Fourthly I’ve been conducting training for the Board of Directors of over 100 Christian organisations.

Over twenty years through books, videos, seminars and simulcasts, you have taught millions of people the Bible. What do you wish to tell the people who read ‘The Prayer Of Jabez’, or did the ‘Biblical Portrait of Marriage’ or ‘7 Laws of the Learner’?
I cannot adequately communicate the joy it brings to my wife’s and my heart when we hear of the life-changes the various courses, books and videos have brought, and do bring, to people.
Biblical Truth set us free. That’s why the books, courses and videos affect people so deeply.  To Him be all the credit!

You are most famous for your best-selling book, ‘The Prayer of Jabez’. Do you still pray that over your life?
Does the sun still rise? Does the moon still shine? Does Nando’s still serve amazing peri-peri chicken?

What memories do you have of your three years living in Africa?
Darlene and I have not spoken publicly about our three years living in Africa—but they were among the most joyful and productive of our entire lives. That is because we were so involved in various types of ministry and leadership in South Africa and other African nations.
It’s difficult to select only a handful of enduring memories. Our son and his family, our daughter and her family, and our youngest daughter – all lived and served in South Africa at various times. Here are some highlights.

Celebrating the planting of our millionth never-ending vegetable gardens for orphans and those struggling with food supply.
Enjoying a cup of tea with President Nelson Mandela in his private residence and responding to his request that we plant vegetable gardens for “his people” in the most difficult economic parts of the Eastern Cape Leading the largest week-long tribal reconciliation event in the history of Uganda with over 5 000 leaders and pastors participating.
We also led a major three-day national reconciliation of 2 000 people from across another country between the “white farmers” and “black workers” in one of the African nations. We spent time with the nation’s president after the historic breakthroughs and appeared on national TV and radio stating that a major work of God had been achieved and the nation was once again at peace.
I remember meeting with eight different African presidents in their palaces, or offices, and sharing with them the power of God to transform their nation. One of those meetings led to President Moi of Kenya asking if I would produce a “Hollywood dramatic motion picture” on the misconceptions surrounding HIV/AIDS. The movie we produced, ‘Beat the Drum’, has now won over thirty international awards and was premiered in 150 nations. Based upon that movie, a South African group of leaders helped to produce an entire HIV/AIDS youth curriculum which 1 200 college students from eleven different countries convened in Swaziland for a month and taught the week-long curriculum in every single high school in the nation on multinational teams with stunning results.
We worked with our “Dream for Africa” team in South Africa and United States to recruit 3 500 Americans to come down to southern Africa during those three years and serve in short-term missions with us, in evangelism, orphan work, feeding the hungry, training pastors, etc. As a result, one ministry now feeds over 5 000 orphans each day.
We witnessed the life change at the four-day DOME event in 2001 when ‘Turn the Tide’ hosted the Jabez seminar with 100 000 believers in 300 churches connected via satellite. That week the TTT audience gave 200 tents to Judea Harvest. It was that week God called us to move to Africa.

Life in Africa has been remarkable, rewarding, and refreshing. We have so many wonderful friends and partnerships among the pastors, denominations, business leaders, and governmental officials.

I heard you are giving yourself to a new initiative called TEN. Why TEN?
TEN stands for “Teach Every Nation”. It is a new ministry that we have committed to lead and serve for the next five years.
Why TEN? In simplest terms-because Jesus’ Great Commission instructed us to go into all the nations and teach everyone the Bible so that they would become His disciples.
What does TEN hope to accomplish?
TEN seeks to train pastors, businesspersons, teachers, and Church leaders across the world (in every nation) with a new and revolutionary curriculum that will better equip them to grow their church, plant new churches, and transform their communities.
Personally, I’m convinced that the greatest leveraged and strategic opportunity to impact the world for Christ—is through the more than 1 000 000 Global South pastors of the world. These pastors are God’s chosen servants, who serve Him and who are deeply desirous to become more like Christ and become more effective for Christ.
Now, after more than forty years of intense ministry around the world, I am thrilled at the opportunity to share with others some of the valuable lessons I have paid so dearly to learn!
People want authenticity – they want proven methods that really work in the marketplace. TEN is a huge step backwards in order to be able to successfully take a giant leap forward. We are returning to the profound simplicity, principles and power of the New Testament and its timeless truths to proven contemporary methods and approaches.

You have many friends in Africa – who are you partnering with?
Friends like Dawie and Chrisna Fourie, Graham Power, Stephan Spies and Maurice Radebe and many more are all dear to me.
The older I become, the more I value enduring and effective partnerships! The New Testament is clear that we are all One Body and are to work together, honouring each other’s gifts and callings.
Whenever unity, humility, and mutual respect operate, the power of the Spirit is unleashed.
TEN has numerous partners of various kinds with pastors, denominations, ministries, NGO’s, Bible colleges and seminaries—but the primary partners who are behind the launch of TEN in September 2013 are Judea Harvest under the leadership of Dr. Louis Blom, Dr. Danie Reyneke and Kola se Klerk and Turn the Tide under Rev. Martin Deacon, Lee Helling, and Rev. Elvis Mvulane.

How far is the influence of TEN?
Judea Harvest and Turn the Tide are doing an excellent job sharing the TEN Vision throughout South Africa, Namibia, Swaziland, Lesotho, Botswana, Mozambique, and Zimbabwe. Because of their long-standing and sterling reputations, the doors to TEN are swinging wide open including various denominations, churches, schools, and other Christian ministries.

Tell us briefly what new courses you are teaching in your September simulcast in SA
All of the live courses are one-day in length – each having eight sessions. The Simulcasts are three days in length to enable everyone who so desires to participate. We are launching with Leadership, Christian Living, and Communication.
The Leadership Course is entitled, “How to Double Your Church, Business, and Personal Productivity”. It is one of the most revolutionary courses that I have ever developed. Over 80% of all churches and businesses unfortunately have plateaued and have stopped growing. They stopped growing because they don’t know the powerful secrets that can assist them to flourish and expand. This course has the potential to radically release people, churches, and companies to experience growth that they only ever dreamed of.
The Christian Living Course is entitled, “Releasing God’s Abundant Blessings” and pulls back the veil so we can finally understand what really has to happen for God to release His full and abundant blessings on our lives, marriages, families, ministry, work, and finances.
When you learn God’s Protocols to Release His Blessings, you can follow them and experience abundant victory and joy. One of our primary goals at TEN is to equip pastors and Bible teachers to teach life changing courses to their churches and communities. This course will be the course that we pray 1 000s of pastors will preach in the months following the September Simulcast.

Tell us more about the Communication Course
The Communication Course is entitled, “Anyone can become a Great Communicator” and builds upon the 7 Laws of the Learner, Teaching with Style, and new material which reveals Christ’s revelation regarding why students respond the way that they do – and what to do to help them become everything that they deeply desire to be.
All of us communicate and teach all day long – whether to our children or family or in business or ministry. If you wish you could communicate more powerfully and effectively, then this course is for you.
The simulcasts are scheduled twice a year in March and September. Darlene and I will be returning for four to eight weeks each of those times and hopefully will enjoy seeing many of our friends and ministry partners.

Finally, are you optimistic about Africa’s future?
I’m a very strong Afro Optimist. All the reports regarding the economic growth of Africa demonstrates that Africa will outshine both United States and China on the rate of growth in the next decade.
Personally, I’m convinced that this is Africa’s greatest season in modern history – and her soon arriving destiny will astound the world.
Key to this vision, however, is that the Church must become the leading influence in the lives of the African people. 