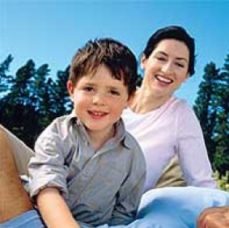 Moving on from divorce or the death of a spouse can be a challenge for any parent.  Meeting someone new, falling in love again and then trying to start a new family only adds to this challenge, especially if there are children from both sides.  However, by approaching these inevitable difficulties in the right way, a strong and healthy stepfamily can be formed.  There are also many rewards and benefits to having a stepfamily:  You gain a larger family, you may gain a child of a different sex to that of your own, you can enjoy having a busy family home and you can share in wide-ranging conversations around the meal table – just to name a few.

Difficulties and solutions for parents
The quality of the couple’s relationship is paramount to the success of the stepfamily.  If this is a committed, loving relationship it can withstand the pressures it will face living in a stepfamily.  Research into the couple relationship in a stepfamily has found that marriage is still marriage!  It hasn’t changed – it still needs all the attention, skill and understanding of any first-time marriage.  But it does have added pressures.

How the biological parent sees the role of the step-parent is crucial.  Each spouse’s parental style should be discussed and some agreement reached between the parents. It is then up to the biological parent to explain any changes to the child.  Possible contentions when parenting styles differ include:  Should the child sit at the table to eat or sit on the floor while watching television?  Should there be a time for bed every night or should this move according to circumstances?  To prevent conflict over how the child is parented a determination to find the middle ground for everyone is essential.

Disagreement between the parent and step-parent may be used by the child to their advantage.  All children will seek out the parent from whom they think they are more likely to get what they want.  As in all families, a united front by the parents is the best one.  This might mean checking sometimes before agreeing to a particular course of action.

In a stepfamily, the strongest bond is between the biological parent and their child.  Parents have unconditional love for their own children, but love for one’s stepchildren is more tentative.  You have to get to know them and that love will be more like that of love for a close friend – caring, giving and warm.  It doesn’t have to mean that love is less, but rather that it has different qualities.

Spend time doing things together as a family – outings, holidays, celebrations, doing household chores, sharing a hobby, praying together, taking the dog for a walk, attending sport events.
Show that you care – words are important but they are not enough.  Actions speak louder than words.
Learn more about child development and parenting through books, TV programmes, parenting courses and talking to other parents.

Difficulties and solutions for children:
The children may have very mixed feelings about living in a stepfamily.  Common reactions in children that are suddenly placed in a new environment include anger, guilt, confusion, uncertainty and wariness. Given that their biological parents’ relationship didn’t last, they have no way of knowing that this relationship will last either.  If one parent died, will the other one live?  Will the step-parent leave too? Children often feel guilty and somehow responsible for what has happened, even though that may seem illogical to the adults affected.  They may feel that they didn’t try hard enough to get their parents back together again and some also worry about the parent who is now living alone.

Children reveal their unexpressed emotions in various ways and may have physical symptoms such as headaches and stomach aches, or regressive behaviour such as bed-wetting or thumb-sucking.  Their anger may be directed at the one who has left, at God, or transferred to the remaining parent or incoming step-parent.  It is imperative that you provide encouragement and support to your children during this difficult time.  It usually helps to talk things through as a family, hearing each person’s point of view and discussing everyone’s feelings.

Changing the birth order in a family may cause confusion and this also affects children’s behaviour.  For an only child, instant siblings are a huge adjustment.  Other children may now be in a different place – a youngest becomes a middle child and may not receive all the attention as the baby of the family, whilst an eldest is now further down the line and has lost his or her privileged position.  Parents can compensate for these changes where appropriate and help the children adjust to their current positions.  For example:  giving extra attention to a youngest that is now a middle child and allowing an only child to have space away from the family.

Children may have been used to the undivided attention of their parent when they lived in a single-parent family.  Now they have to share their parent, and it will take time for them to adjust.  Reassurance and special one-on-one times with that parent will help them to accept the new situation.

In addition to the loss of a parent, the child may have had to move home, change school, clubs or church and no longer have contact with the same friends and family.  These are additional losses and changes which can add to the child’s insecurity and frustration.  If the grieving child sees the step-parent as the reason their parents are not still together, they may resent this person.  If they think that the step-parent’s presence means they have to forget the dead parent or the one they no longer live with, they may be bitter.  If the child has been able to work through some of their losses, they will be more able to relate to a step-parent.  It is very important that the new step-parent is patient and supportive during this difficult time.

One of the most difficult realities for a child after a divorce is that their parents no longer want to be together and usually don’t want to see each other.  In addition, they sometimes have to deal with hearing their parents argue, usually over them.  Most research suggests that the greatest cause of emotional pain in children following divorce and separation is the ongoing conflict between the original parents.  Avoid fighting with the other parent in front of the child and be careful not to say harmful things about them when your children are around.  However right you may be, take care how you explain the situation to the child – they are related to that other parent and still love them.  It is important that they maintain a good relationship with both parents as far as possible.


Difficulties and solutions for the family
To start out living as a new stepfamily in a new house, with new furniture and with all family members having input, would be ideal.  Everyone would be starting out together as equals, settling down together in new surroundings with no previous memories attached to the place.  However, usually one partner, with or without children, moves into the existing home of the other partner.  This solution may solve the immediate need to live together, but there are practical issues which need to be worked out.  Not doing this will leave one partner and their children feeling that they are guests in someone else’s home.  Moving into an existing home can work very well if everyone is prepared to make adjustments, and find ways in which everyone can feel “this is our home now.”

It is for the partner whose home it was originally, to make the new partner feel welcome and included.  It’s not enough to say there’s space in the wardrobe and empty drawers for their things.  It means taking a step back and looking at the house with fresh eyes.  It’s never too late to discuss how people feel about the home, and what changes are possible so that everyone takes ownership of it.  Redecorating bedrooms and letting children have a say in the colour scheme goes a long way to establishing that “this bedroom is mine/ours.”  Children who are part of the stepfamily but who only stay some of the time need to feel welcome too.  Help them feel included by giving them a space of their own with everyday items such as toothbrushes, pyjamas, spare clothes, toys and books.

It is very important that all the children are treated as similarly as possible, whether they live most of the time with the family or not.  Conflict arises between the couple and between the children if some of the children are favoured more than others with clothes, toys and outings.  It can be tempting to treat visiting children differently, allowing them more latitude because the parent has less time with them.  This doesn’t help the child to integrate with other family members, or to feel part of the family if they are always treated as a guest.  Resident children will resent any favouritism and may transfer this resentment onto the visiting children and their parent.  Try and arrange special family times where everyone participates and feels a part of the family.

Building a healthy stepfamily involves a lot of hard work, prayer and patience.  By approaching each situation positively and by trying to put yourself in the other person’s shoes, families can learn to adapt to the new situation and start building loving relationships.  It certainly takes time, but the rewards of a successful stepfamily are worth the effort.  Remember, every step counts!


Excerpts for this article were taken from “Every Step Counts” by Christine and Tony Tufnell.  Published by Lion Hudson; Pearson Education, South Africa.

Pearson Education are giving away five copies of this book.  To stand a chance of winning one, send your name and contact details to:  JOY! Magazine/Pearson Giveaway, PO Box 2990, Somerset West, 7129

Building a healthy stepfamily
Rewards from building a stepfamily usually come after much time and effort.  It is estimated that it takes between 4 and 6 years for a stepfamily to form a cohesive unit which functions satisfactorily.

Stage 1: Forming
This is when everyone is on their best behaviour.  Everyone tries really hard to get along and this can last until the family has lived together for a little while.  All seems to be going well initially and when conflict arises it surprises everyone.

Stage 2:  Storming
This can last some time in a stepfamily.  Conflicts and frustrations within the family come up.  It is important to acknowledge the disagreements and find ways to resolve them as far as possible.

Stage 3:  Norming
Family members have got to know each other better.  The ‘shape’ of this family has been established, with rules and boundaries.  Shared memories and traditions grow.  It is a working unit but not yet secure. There are challenges but the family is better equipped to face them.

Stage 4:  Performing
Here the stepfamily is a cohesive, identifiable unit, with each member having a sense of belonging, of being cared about, of having a place in it and loyalty to it.  This is the goal of a successful stepfamily.