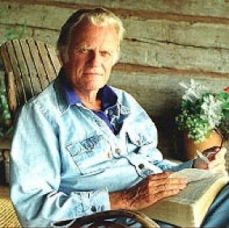 He has preached to nearly 215 million people in live audiences in more than 185 countries.  Hundreds of millions more have been reached through television, video, film and webcasts.  Millions of individuals have been led into a relationship with the Lord through his message.  With a ministry that started in the early 1940’s and has spanned over six decades, Billy Graham has become one of the best known evangelists in history.  Join us, as we reflect on the life of a man who lives Acts 1:8   with every fibre of his being.

Acts 1:8 “But you will receive power when the Holy Spirit comes on you; and you will be My witnesses in Jerusalem, and in all Judea and Samaria, and to the ends of the earth.”

How it all began
Billy Graham was born on 7 November 1918, and was raised on a dairy farm in Charlotte, North Carolina.  His favourite hobby as a child, after all the chores on the farm were complete, was to read for hours on end on a wide variety of subjects.  He loved learning and had a vast general knowledge from a young age.

At the age of 16 he attended a meeting of a travelling evangelist, Mordecai Ham, and gave his life to the Lord.  At that moment, his whole life changed.  He studied Theology at the Trinity College in Florida and was ordained in 1939 by a church in the Southern Baptist Convention.  In 1943 he graduated from Wheaton College in Illinois and married fellow student, Ruth Bell, daughter of a missionary surgeon.

After graduating from college he pastored the First Baptist Church in Western Springs, Illinois before he joined Youth for Christ.  He preached throughout the United States and Europe directly after the war and soon became a popular young evangelist.  In 1949, at a Los Angeles crusade, Billy Graham was launched into international prominence.  He erected a series of circus tents in a parking lot and began preaching.  Crowds overflowed the tents each night and eventually they had to extend the crusade from three weeks to eight.  The rest, is history.

Looking back over six decades
Since that first crusade Billy Graham has preached at a further 415 crusades all over the world.  In many of these crusades he would preach night after night for up to 16 weeks.  He never complained and never showed his exhaustion.  His passion for souls only grew stronger and his legacy will go on for many generations to come.  Millions of people who serve the Lord today, gave their hearts to Him at one of Graham’s crusades, and those they lead to the Lord will add to the many hearts written in the Book of Life because of one man’s simple obedience.

Billy Graham has preached in cities such as New York and in remote African villages.  His audience has ranged from Heads of State to the simple-living tribesmen of Africa.  Yet his message was always the same:  “Jesus loves you and wants to know you, come forward and give your life to Him.”

In 1950 he founded the Billy Graham Evangelistic Association, and through this ministry many millions are reached by the ‘Hour of Decision’ which is a radio  broadcast around the world every Sunday.  The Association has a newspaper column which is carried by newspapers in the United States and internationally, as well as several television specials.  Their official publication, the ‘Decision’ magazine, has a circulation of more than 600 000 and is available in English and German with special editions in Braille and is also available on cassette tape for the visually impaired.  World Wide Pictures has produced and distributed over 125 productions, making it one of the foremost producers of evangelistic films in the world.  These have been translated into 38 languages and have been viewed by more than 250 million people worldwide, including those in prisons and correctional facilities.  Billy Graham has stopped at nothing to bring the Gospel to the world.  As of 2002, Graham’s lifetime audience, including radio and television broadcasts, topped two billion.

He has written 25 books, many of which have become best-sellers.  “How to be born again”, published in 1977, had the largest first print run in publishing history – 800 000 copies.  “Angels: God’s Secret Agents”, published in 1975, sold one million copies in 90 days.  His influence on the world is staggering.  Institutions, both secular and Christian, have honoured him and he has been awarded numerous honorary doctorates in several countries.

Despite all these accolades and achievements, Billy Graham only does what he does out of a deep love for the Lord.  He still lives on a farm and money holds no interest to him.  He was once offered a five-year, R35 million contract from NBC, but he turned it down in favour of continuing his touring revivals.  He is clay in God’s hands and because of his unwavering service, the Lord has used him in mighty ways.

During the Cold War, Graham became the first Christian to speak behind the Iron Curtain, addressing large crowds in countries throughout Eastern Europe and in the Soviet Union, calling for peace. During the Apartheid era, Graham consistently refused to visit South Africa until its government finally allowed attending audiences to sit desegregated. His first crusade here was in 1973, during which he openly denounced apartheid. Graham said, “There is no scriptural basis for segregation…the ground at the foot of the cross is level, and it touches my heart when I see whites standing shoulder to shoulder with blacks at the cross.”

Even though his health was poor, Billy Graham stood in the gap for millions of Americans during their time of crisis.  On September 14  2001, in the aftermath of the September 11 2001 attacks, Dr. Graham led a prayer and remembrance service at Washington National Cathedral attended by President George W. Bush and past and present leaders. On the weekend of March 11 2006, Billy Graham held the ‘Festival of Hope’ with his son, Franklin Graham. The festival was held in New Orleans, which was recovering from Hurricane Katrina.

At the dedication of the Billy Graham Library in May this year, three former presidents- Jimmy Carter, George Herbert Walker Bush and Bill Clinton –  joined the audience to pay tribute to a man they all love  Bush, now aged 83, gave the keynote address.  He said that Graham “helped tip the balance of history in freedom’s favour.”  Bush, choking up as he spoke, thanked Billy Graham for ministering to four generations of his own family.  He ended by saying, “Billy is a spiritual gift to all of us.”

Bill Clinton said that he recalled going to Billy Graham crusades since the late 1950’s.  “Billy has known me since 1985,” he said, “but I have known him for nearly 50 years.”

Carter praised Graham as a boundary-breaking preacher who had the greatest influence on his own spiritual life.  He said, “I’m just one of tens of millions of people whose spiritual life has been shaped by Billy Graham.”

From presidents to businessmen to others in ministry, Billy Graham has become an inspiration to millions.  He is the leader that leaders look up to and admire most.

Getting to know Billy Graham on a more personal level
Most of us know Billy Graham as a strong and powerful preacher; one who has preached to more people than any man who has ever lived. Yet, few of us know of his private life, the hardships he has endured and the courage he has shown in the face of death.

Graham has had Parkinson’s disease for about 15 years and is regularly admitted to hospital to drain fluid from his brain.  He has suffered from pneumonia, broken hips and prostate cancer.  Most recently he was admitted to hospital for intestinal bleeding in August this year.  Yet, his failing health doesn’t stop him from his mission.  When he was released from hospital in early September, he said that he was looking forward to writing another book.

His greatest challenge this year was not his health, but the death of Ruth, his beloved wife of 64 years.  Her death literally broke his heart.  On June 13th 2007  Billy Graham said, “Earlier this year, after much prayer and discussion, Ruth and I made the decision to be buried beside each other at the Billy Graham Library in my hometown of Charlotte, North Carolina. We have held this decision privately and only decided to announce it now that she is close to going home to heaven. Ruth is my soul mate and best friend, and I cannot imagine living a single day without her by my side. I am more in love with her today than when we first met over 65 years ago as students at Wheaton College.” The day after this announcement, on 14 June 2007, Ruth died after entering a coma. She was 87.

Graham reminisces about the first day he met Ruth: “I saw her walking down the road towards me and I couldn’t help but stare at her as she walked. She looked at me and our eyes met and I felt that she was definitely the woman I wanted to marry.” Ruth thought that he “wanted to please God more than any man I’d ever met.”  They had 5 children together –  three daughters and two sons.  Their son, Franklin Graham, will be his father’s successor at Billy Graham Ministries.  Billy and Ruth also have 19 grandchildren and 28 great-grandchildren.

Billy Graham adores his family and is thankful for the many years he has had to spend with them.  When asked what he would do differently, if he had his life to live over again, Graham says he would spend more time immersed in Scripture and theology. “The greatest regret that I have is that I didn’t study more and read more,” he says. “I regret it, because now I feel at times I am empty of what I would like to have been. I have friends that have memorised great portions of the Bible. They can quote so much, and that would mean a lot to me now.”

Where to from here?
Billy Graham knows that he doesn’t have much longer to live and he is absolutely fine with that.  He hasn’t wasted a single day of the 88 years he has spent on earth.  This is surely a life that will reap an eternity of blessing.

Towards the end of Ruth’s life, he said, “At night we have time together; we pray together and read the Bible together.  It’s a wonderful period of life for both of us. We’ve never had a love like we have now—we feel each other’s hearts.” He misses her terribly and longs to see her again.  At night, as they read and reminisced and sometimes just gazed at one another, the Grahams’ conversation often turned to what they believed awaited them beyond the grave. This comforts Graham now.  He says, “I think about heaven a great deal, I think about the failures in my life in the past, but know that they have been covered by the blood of Christ, and that gives me a great sense of confidence.  I have a certainty about eternity that is a wonderful thing, and I thank God for giving me that certainty. I do not fear death. I may fear a little bit about the process, but not death itself, because I think the moment that my spirit leaves this body, I will be in the presence of the Lord.”

As this incredible man lives out his last years, let us keep him in our prayers as he has kept us in his. Although we may lose a great friend and mentor, heaven will certainly be gaining one of the greatest Christians of all time.  God bless you, Billy.