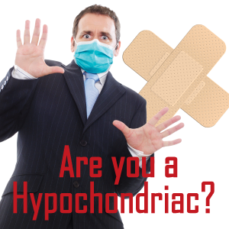 Do stomach aches, headaches and other bodily symptoms make you worry that you are seriously ill? Can doctors convince you otherwise or do you believe you have a sickness that is currently undetectable and life-threatening? Have you been labelled a hypochondriac?
What is hypochondriasis?
Hypochondriasis is characterised by symptoms suggesting a physical disorder but for which there are no demonstrable organic findings or known physiological mechanisms. Hypochondriasis is defined as a person’s
preoccupation with the fear of contracting, or the belief of having, a serious
disease. This fear or belief arises when a person misinterprets bodily symptoms or functions. Although it might start out as a small sign/symptom, such patient’s preoccupations and concerns with being ill often culminate in significant distress and impairment in one’s ability to function socially and occupationally.
A persistent fear
According to the psychiatric diagnostic manual, diagnosis of hypochondriasis requires that patients be preoccupied with the false belief that they have a serious physical disease, based on misinterpretation of physical signs or sensations. The belief must last 6 months, despite the absence of pathological findings on medical and neurological examinations. The diagnostic criteria also stipulate that the belief cannot have the intensity of a delusion (a fixed false belief based on incorrect inference about external reality) and cannot be restricted to distress about appearance.
Anyone can be affected. The symptoms must also be severe enough to cause emotional distress or impair the patient’s ability to function in important areas of life. When such patients do not recognise that their concerns/preoccupations about contracting a disease are excessive, clinicians may specify the presence of poor insight. This condition affects men and women equally, but are most commonly seen in those between 20-30 years of age.
Real or imagined?
A sticky topic…While many people might worry when
they start to feel ill, most of them are content with proper rest, high doses of vitamin C and if necessary, a check up along with treatment from their local GP. People struggling with hypochondriasis however may become increasingly concerned about their health and well-being, despite appropriate reassurances from their doctor/s. While the symptoms cannot be corraborated medically, the pain and anxiety feels very real. Such patients are thus sensitive to and susceptible to being perceived as ‘crying wolf’ and hence, not taken seriously. On the other end, family members may take on more intensive caring roles, which may inadvertently reinforce their concerns and preoccupations. This may result in an unhelpful cycle of costly arduous doctors’ appointments and tests without the appropriate help.
Receiving appropriate treatment
Such patients are generally known to present at general practioners rooms and hospitals, making them resistant to psychiatric and psychological support. As most hypochondriacal symptoms are closely associated with psychological stressors, such individuals should be encouraged to seek support. Because we live in a relatively stigmatised society, emotional vulnerability is hardly encouraged. Such ‘pain’ can thus manifest physically, in forms that are more socially acceptable and ‘supported’. The arguement is not so much about whether it is a physcial or psychological disorder, but more about treating it apporpriately and relevantly. This means involving a multi disciplinary team (of doctors, psychiatrists and psychologists) as well as mobilising one’s social support.
When to seek professional help
It is best to have your symptoms assessed and distinguished from other medical conditions that are not necessarily easily diagnosed. Different types of therapy are available for such symptoms or conditions, each aiming to reduce anxiety and promote a healthy lifestyle. Over and above seeking treatment, remember to pray and ask the Lord for His strength and power to help you overcome anxiety and fear. he is the Master Physician and promises in Isaish 19:22 that if “they will turn to the Lord…He will respond to their pleas and heal them.”

Nicole Sun is a Clinical Psychologist and part time lecturer at the ICP. For counselling or studies in Christian Psychology call 011 827 7611 or see www.icp.org.za To contact Nicole directly please send an email to nixsun@mweb.co.za