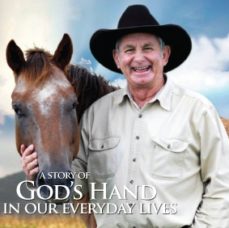 Farmer and evangelist Angus Buchan is a man of humble beginnings, with an exhilarating testimony of God’s grace. Through his book and feature film, ‘Faith Like Potatoes’, Angus rose to prominence and for years has impacted hundreds of thousands of men at his Mighty Men Conferences. Now the reach of his ministry has been documented yet again in a riveting new film, ‘Ordinary People’.

Charting the ministry
The film charts Angus’ dramatic heart attack that he had on stage in 2009 during a Mighty Men’s Conference where over 200 000 men had gathered. It also looks at the revelation he received about his ministry following the health scare, and the impact he has had on others in the years that have followed.

Directed by FC Hamman, the film closely follows the lives of three men: André Cloete, John Peters, and Lucky Nzimande. André  is a young man who has become ensnared in alcohol abuse and due to his broken relationship with his ‘strictly religious’ and absent father, is headed towards a life of ruin. John, a middle aged panel beater from Bethlehem, has begun to lose his grip on family, relationships and health.

The film tells the dramatic story of the three men’s journeys and experiences leading up to the 2010 MMC. Their respective stories are cleverly interwoven with the anointed message and ministry of Angus.  Little do they know that God-orchestrated events will transform their lives forever.
A life-changing movie

Angus plays himself in the film, but is supported by a cast of talented and well known South African actors. Director FC Hamman had his own ‘Damascus-road’ experience with God in 1981 when he accepted Jesus Christ as Lord and Saviour. He believes that throughout his career, God has been preparing him for this present moment. With ‘Ordinary People’ and other Christian films that follow, he is now stepping into his calling.
“The making of Ordinary People was and still is an amazing and life-changing journey. It was a pleasure working with a very dedicated crew and some of our most talented actors. Angus Buchan is an inspiration to me and I am fortunate to call him my personal friend”.

Film info
Shot on location in Limpopo, Greytown and Johannesburg, this film is a must see, as it invites the viewer on a dramatic journey of the hard blows life deals, but the redemptive hope Jesus provides. The film opens in Ster Kinekor cinemas nationwide from 5th April.