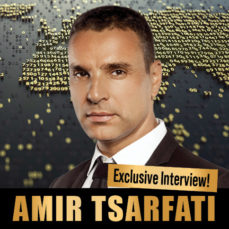 A respected authority on Israel, the Middle East and Bible prophecy, Amir Tsarfati has seen his ministry expand globally over the last decade. Amir joined the Israeli army in 1990 and underwent basic training during the first Gulf War. He served almost a year in the IDF Armored Corps, and was later stationed in Jericho. When the peace process began and Jericho was the first city transferred to the Palestinian Authority, Amir, then 21, was appointed as active Deputy Governor of Jericho and the Jordan Valley, also becoming one of Israel’s military negotiators with the Palestinians. Since 2004, Amir has been consultant to various law enforcement agencies and seminars on homeland-security issues. In 2008 he was was the keynote speaker at the Hostage Negotiators Conference on the topic of terrorism.

Amir speaks Hebrew, Arabic, English and German, and leads his own tour groups in Israel, offering pilgrims a deeper understanding of the unbreakable ties between the loving God of the Bible, His Chosen People and His Land. Ahead of his visit to South Africa this month, we caught up with Amir to discuss a few “hot topics”.