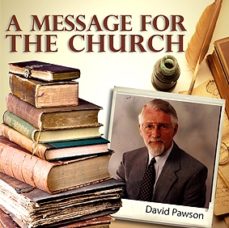 A Message For The Church
As an author of many books, (in fact he has lost count) and a prominent voice in the Christian world for over 60 years, David Pawson offers Biblical perspectives on challenging issues and inaccurate teachings within the Body of Christ. He was a chaplain in the Royal Air Force and comes from a lineage of Methodist preachers, dating back to John Wesley’s time. Pawson is well-known for his insistence on thorough Bible teaching, and his latest book, ‘Unlocking the Bible’ is a 1 343 page handbook for stimulating Bible reading.

YOU ARE A PROLIFIC AUTHOR, AND TEACHER. WHERE DOES YOUR LOVE FOR THE BIBLE COME FROM?
In my early ministry, I taught in ‘lifeboat’ churches (predominantly filled with women and children). When I joined the RAF, I was confronted with hundreds of men amongst whom my sermons went off like lead balloons. I realised I had to radically change my preaching and decided to take them through the Bible in six months .

This series had the most astonishing effect on the men and on me. Suddenly as  people got the ‘big picture’, they understood the heart and mind of God so much better. This became my life’s work – to declare the whole Truth of God’s Word.

YOU ARE RESPECTED IN EVANGELICAL AND CHARISMATIC CIRCLES – WHICH IS RATHER UNIQUE, THESE TWO CHRISTIAN WORLDS ARE OFTEN FAR REMOVED FROM EACH OTHER. WHY ARE YOU ABLE TO MOVE FREELY IN BOTH?
The answer is simple – I am able to move freely within these circles, as I am both an Evangelical and a Charismatic. Each circle represents a component  of me – I am diligently committed to the Word of God and the study thereof; and I am passionate about the work of the Holy Spirit and His guidance in my life. The two should not be mutually exclusive, as we need both the Spirt and the Word. If you have Scripture but no Spirit, you will dry up, if you have Spirit but no Scripture, you will blow up. But have the Word and the Spirit together, and you will grow up!

GOD WILL RETURN FOR A UNITED BRIDE/CHURCH. PRACTICALLY SPEAKING HOW DO YOU SEE THE BODY OF CHRIST UNITING WITH MANY FRACTURED DENOMINATIONS AROUND?
I don’t recall Him saying that. I was recently informed that there are about 38 000 denominations around the world with over 4 000 in South Africa alone! This number is increasing, with new churches gathering in networks and groups spreading far and wide. I don’t see denominations ending, but I must point out that there are no ‘Baptists’, no ‘Roman Catholics’ in Heaven. The angels aren’t going to ask what your label is. When Jesus returns all such denominating labels will be obselete.

BASED ON YOUR OBSERVATIONS IN MINISTRY OVER THE LAST 60 YEARS, WHAT IS THE GREATEST THREAT TO CHRISTIAN LIVING IN THE WESTERN WORLD?
I can’t say what is the greatest threat, but I can certainly identify a few of the main ones. There are external threats, such as the rise of Islam, with its devoted followers who appear far more committed to their faith than many Christians.

Another external threat would be secularism and its impact on society. I am more bothered by the internal threats such as assimilation which used to be called worldliness.

Assimilation refers to Christians becoming so much like their immediate environment that they lose their distinctive behaviour. If I spend more time surfing the net than reading the Bible, my beliefs and behaviour will be more like the world than Christ, and we may not even realise it, which is the true threat!

IN YOUR OPINION, WHAT IS THE MOST COMMON MISUNDERSTANDING CHRISTIANS HAVE ABOUT THE BIBLE?
This is a very important question. A common misunderstanding relates to (a) the relevance of the Old and New Testament, and (b) the overall context and applicability of Scripture. I believe that the reason these misunderstandings arise is due to the format in which the Bible has come to us. God never intended the Bible to be divided into chapters and verses, all numbered, for us to be able to quote “text” references to prove a point. . We often quote one chapter or a verse . A text out of context so easily becomes a pretext. Another critical misunderstanding is dividing the Word of God into ‘Old’ and ‘New’ Testaments – as these titles are misleading.

Testament  and covenant  are synonyms and it is a mistake to believe that the Old Testament is ‘past its sell-by date’ and simply a historical record. Many promises and teachings from the O.T. are still relevant and vital to our Christian walk today.

AFTER DECADES OF LIVING OUT YOUR FAITH, HOW DO YOU STAY EXCITED AND COMMITTED ABOUT THE THINGS OF GOD?
I can’t keep myself committed and passionate, it is the Lord who does that. He answers my prayers to keep me going. It is His grace and empowering within me that keeps me committed. But on the human side, the changed lives of those I reach keeps me excited.

THERE SEEMS TO BE A GLOBAL EMPHASIS ON THE ‘APOSTOLIC’CALL OF THE CHURCH AND CHRISTIANS. IN OUR PURSUIT TO EXPAND THE KINGDOM, HAVE WE PERHAPS LOST THE VITAL PRACTISE OF SHEPHERDING THE LOST AND THE HURTING?
I believe there is a widespread misunderstanding of our mandate. Jesus never told us to make decisions by using the sinner’s prayer. He told us to make disciples. “Baptise them and teach them to observe all that I have commanded you.” Matt 28:18-20. We  seem to have many Apostles and Evangelists these days, but not enough shepherds (Pastors) and Teachers. All are needed to produce true disciples.

IN A WORLD MARRED BY SIN, EARTHQUAKES, TERRORISM AND FALSE PROPHETS, DO YOU BELIEVE WE ARE LIVING IN THE LAST DAYS?
I believe we have been in the last days for 2 000 years. That is what Peter called them on the day of Pentecost. It is a phrase covering the period from Jesus’ first visit until His final one. In my estimation, the natural disasters, sin, etc, have been around since then  and there has not been a noticeable increase in their occurrence (rather, there is an increased awareness now due to media exposure). Fatalities from earthquakes are shooting up because  there is greater population, not necessarily greater frequency. Jesus gave us very clear signs to mark His return. The question really is, are those signs visible yet.
One can find these markers in Matthew 24, which stipulates there shall be:

Disasters in the world
A great decline in church numbers followed by world evangelisation
A Middle-East rise of a world dictatorship and the greatest trouble the world has yet to see
Signs in the sky: that the sun, moon and stars will lose their brightness.

Jesus said when we see all these things, we will know He is at the door.
I believe some of the four signs are visible, but am not among those who think we are the last generation before He comes.

THIS IS YOUR FOURTH VISIT TO SOUTH AFRICA OVER THE PAST TWENTY YEARS. WHY ARE YOU RETURNING AND WHAT WILL YOUR MESSAGE ENCOMPASS?
When I first came to SA in the 1980’s, I was called a communist because I said that a God of Righteousness was as concerned about injustice as much as immorality and I predicted  some political developments in your country. My meetings in Durban and Cape Town were cancelled.

On my second visit I was welcomed with open arms, possibly because my prophecies had came true! I anticipate this visit will be controversial as I have been asked to tackle popular ideas creeping into the Church.

WHAT IS THE ESSENCE OF YOUR MESSAGE?
One  word: Grace…! What I will be highlighting are the distortions that come when we add adjectives to the noun. Such as ‘Amazing’ Grace or ‘Outrageous’ Grace. Simply adding an extra word in front changes the meaning. I have been asked to speak about are ‘Irresistible Grace’ and ‘Free Grace’. These dangerous ideas are distorting Christian belief and changing Christian behaviour.

Grace is undeserved favour – not an irresistible force. God through His Grace does not force you to be a Christian, nor does He  force you to stay a Christian. Free Grace is the notion that says not only does God forgive your past sins but also your future sins, which in practise  doesn’t matter what you do…These are deceptive teachings.

WHERE CAN ONE BUY YOUR BOOKS AND DVD SERMONS?
My books are available in SA through Jonathan Ball Publishers, or www.truthtotell.co.za. My SA sermons through Joshgen church: www.joshgen.co.za or 021 557 6020.