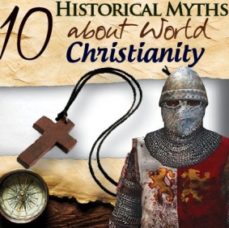 As followers of Christ and adherents of the Bible, Christians are called to be people of the truth. Thus, it is crucial that we seek to understand our tradition as accurately as possible. So consider these top ten historical myths about global Christianity.

1. Christianity is a Western religion
It neither began in Western Europe, nor has it ever been entirely confined to Western Europe. The period in which it appeared to be indissolubly linked to Western European identity was a relatively short one, lasting from the early 16th to the mid-20th centuries. The Church in China, India, Ethiopia, and Iraq is older than the Church in Europe.
2. Christianity was imposed by force on non-Western people
If this were true, it would reduce non-Western Christians, even today, to the status of passive recipients of Western ideological domination. In fact, Western missions never possessed the power necessary to achieve such capitulation, even if they wanted it, which they did not.
3. Missionaries destroyed local indigenous cultures
Indigenous cultures were not static entities. To suggest that they were is characteristic of Western modernity. Missionaries often displayed what we would term cultural blindness, but their message, once translated into the vernacular, acquired indigenous cultural overtones. Missionary contributions to the inscription and study of indigenous languages have helped to preserve and enrich cultures.
4. Christian missions operated hand-in-glove with the colonial powers
Sometimes they did, but frequently they didn’t. Missionaries were usually critical of the way in which empires operated, mainly because they conceived of empire as a divinely bestowed trust. True, they didn’t oppose colonial rule on principle, but then who did before the late 20th century?
5.Protestant missions began with William Carey in 1792
John Eliot’s mission work among the Native Americans of New England began as early as 1646. The first Lutheran missionaries arrived at Tranquebar in South India in 1706. In his famous ‘An Enquiry into the Obligations of Christians to use Means for the Conversion of the Heathens’ (1792) Carey insisted that he had many predecessors.
6. The 19th century was the only great century of Christian missions
It was the great age of Western missionary expansion, but not the [only] age of indigenous conversion.[While the 20th century has had greater numbers of Missionaries and conversions, the depth of impact of the 19th Century missions was spectacular.]
7. “Christianity, Commerce, and Civilisation” was an imperial creed
It was essentially an anti-slavery humanitarian creed, associated especially with David Livingstone (though he didn’t invent it). For those reasons it often led to advocacy of imperial solutions. Fighting slavery actually led to imperial expansion as humanitarians called for deeper commitment from Britain to root out the slave trade at its sources in the African interior, setting captives free.
8. We live in a post-colonial age
We certainly don’t live in a post-imperial age. Formal colonial rule is usually a last resort adopted by powerful nations who run out of cheaper options of control. Decolonisation can be seen as a return to informal means of control. Definitions of what constitutes colonialism are contested: what about the subject status of [Tibetans in China, Arab Colonialism in North Africa and China’s neo-colonialism in Africa?]
9. To proclaim the unique saving value of the Gospel is to be intolerant of other religions
This is to confuse a Theological position with an attitudinal stance. Because of their understanding of the nature of truth, Christians can believe that others are fundamentally mistaken in their beliefs, yet still defend their right to hold and practise such beliefs.
10. We live in a post-missionary era
We most certainly don’t. There are approximately 426 000 foreign missionaries in the world today. In 1900 there were about 62 000. The United States, as one entity alone, still sends around
127 000 missionaries overseas per annum. 


Brian Stanley has taught in theological colleges and universities around the UK. He is now part of the faculty at the University of Edinburgh: www.cswc.div.ed.ac.uk