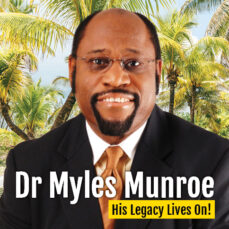 Dr Myles Munroe was arguably one of the greatest leaders and motivational preachers in the last 100 years. The Bahamian minister, who tragically died in a plane accident in 2014, left behind a powerful legacy and ministry fruit that has continued to blossom for years. He was passionate about leadership and transition, and led one of the most influential churches in the Caribbean, Bahamas Faith Ministries International. To date, Dr Munroe’s leadership principles and lessons have had a far reach in South Africa, our beautiful nation that he loved so much.

Facebook, Twitter, and other big tech companies actually want standardised internet speech regulations. In fact, Facebook has been spending millions of dollars on ads that openly call for more government regulation of speech on the internet.

At first glance, it may seem odd that Facebook wants more government regulation of the tech industry, but it actually makes perfect sense. If the government is the one making the rules, Facebook and the other big tech companies can legally censor you into oblivion without ever having to worry about any legal consequences.

South Africa has many theological education institutions. But many lecturers in these institutions do not affirm God’s Word as true and the final authority. Most view the Bible as a book that contains words about God, not as God’s authoritative words to us today.

What must be done about this problem?

God does not treat us as our sins deserve. Rather, God is a God of grace. One of the most frequently repeated statements about God in the Old Testament involves this attribute of grace: “The Lord, the Lord God, merciful and gracious, longsuffering, and abounding in goodness and truth” – Exodus 34:6. Countless times in the Old Testament, we see how God patiently and graciously dealt with sinners.

The word “grace” appears nearly 150 times in the Bible. It is a decidedly biblical concept. A good working definition of grace is: unmerited favour given by God to those who deserve His punishment.