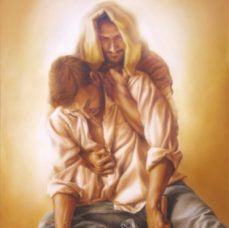 Jesus Will Never Leave Nor Forsake You

“But God demonstrates His own love toward us in that while we were still sinners, Christ died for us.” Rom 5:8

As we turn away from our sin and turn to Christ we find forgiveness and freedom.
Jesus Christ is a Friend to the friendless.
He is a Helper to the helpless.
He gives freedom to the addicts.
He loves the unloved.
He accepts the outcasts.
He changes the unchangeable.
He forgives the unforgivable.
He accomplishes the impossible.
He saves sinners.
He seeks the lost.
He gives direction to the aimless.
He gives hope to the disillusioned.
He gives Truth to the confused.
He gives joy to the depressed.
He gives purpose to the purposeless.
He gives hope to the hopeless.
He redeems and He renews.
He touches and transforms.
He answers prayer.
He works miracles before our eyes.

God gives the very best to those who leave the choice to Him.
Have you surrendered your life to Christ?  Pray to God and give Him all the bad things in your life: your hurts, disappointments, fears, failures and sins.  Give them to Him and leave them with Him.  Let Jesus Christ heal you inside and forgive you and cleanse you.  He will change you and turn your sorrows into joys and your fears into peace of heart and mind.  Submit to Him and He will give you a new direction in life.

“Repent and…be baptised in the Name of Jesus Christ for the remission of sin; and you shall receive the gift of the Holy Spirit.”  Acts 2:38

Jesus Christ gives us a new start in life and a new life to start.  You not only need to surrender all your sins and failures to Him, but all the good things that He has entrusted to you as well: your talents and your abilities, your plans and your opportunities, your energy and your time, as well as your love.

Give everything to Jesus Christ and determine: No longer will I do with them just what I want to do, or what other people tell me to do.  From now on I’m going to use my talents, time and treasure as God wants me to.

I will ask: What would Jesus do in my place?  I will no longer live just for fame and fortune, for popularity and prestige; no longer will it be just for me, myself and I.  From now on I will live for Jesus Christ, no matter what the cost, to help and to love and to reach this world for Him.

His Great Commission will be my supreme ambition.  His last command will be my first concern.  My highest priority will be to love God with all my heart, soul, mind and strength and to love my neighbour as myself.

We only have one life – it will soon be passed; only what’s done for Christ will last.

The Will of God will never lead us where the Grace of God cannot keep us.

Our priority must be to seek first God’s Kingdom and His righteousness, then all these things will be added to us  (Matt 6:33).  When we delight ourselves in the Lord, He gives us the desires of our heart (Ps 37:4).

The Word of the Lord promises us, “You will keep him in perfect peace, whose mind is stayed on You, because he trusts in You.” Isa 26:3

Do you know that peace that passes all understanding?  Does the peace of Christ guide you?  Is your mind steadfast?  Do You trust wholeheartedly in Christ alone?

If you want to revive your devotional life, turn to the Psalms.  The Psalms are the middle book of the Bible, the biggest book in the Bible, the Prayer book and Hymn book of the Bible.  If you don’t know what to pray, if you don’t even want to pray – turn to the Psalms and begin to read and pray through them.  There are 150 Psalms.  If you pray through just one Psalm a day it will guide your prayers for five months.  Make the Psalms the prayer of your heart and you will experience a revival in your devotional life.

This is God’s Word for you: “There is therefore now no condemnation for those who are in Christ Jesus, who do not walk according to the flesh, but according to the Spirit…and we know that all things work together for good to those who love God, to those who are the called according to His purpose…who shall separate us from the love of Christ?  Shall tribulation, or distress, or persecution, or famine, or nakedness, or peril, or the sword?…Yet, in all these things we are more than conquerors through Him who loved us.  For I am persuaded that neither death nor life, nor angels nor principalities nor powers, nor things present nor things to come, nor height nor depth, nor any other created thing, shall be able to separate us from the love of God which is in Christ Jesus our Lord.” Rom 8:1, 28, 35-39
Dr. Peter Hammond is the author of The Power of Prayer Handbook.  Tel: (021) 689-4480; www.frontline.org.za

Are You Having a Midlife Crisis
What is a Midlife Crisis? MLC is an emotional condition that can appear in both men and women, usually around 45 years old. However, latest studies reveal that the spread is more around 35 to 50. The anxiety felt usually focuses on the realisation that a person’s life is halfway over. One of the factors has to do with aging. The person may feel that by the time he/she reaches the supposed halfway point in life, he/she should have achieved more.
Marc Gerzon made the following statement about understanding the Adult Metamorphosis: “I had a war going on inside me between the voice that said, ‘You’re finished growing, you’re done, it’s a done deal’; and another voice that said, ‘You’ve only begun to explore what life is about!’”
This sums it up beautifully, doesn’t it?

What would normally be a dead giveaway that a person has entered a MLC? Here are a few SIGNS:

·         He dresses in ‘younger’ clothes
·         He chooses a younger girlfriend
·         He buys a sports car
·         He seeks ways to regain his youth
In more extreme cases, it could possibly lead to suicide.
What about the person who has not gone the route of buying the sports car and dressing quirky. Well, maybe you want to run yourself past the following checklist which should assist you in discerning whether or not you are border line. Here follows a few SYMPTOMS:
·         Boredom or Exhaustion or Frantic Energy
·         Self Questioning
·         Day Dreaming
·         Irritability
·         Unexpected Anger
·         Acting on Alcohol, Drugs, Food Compulsion
·         Greatly increased or decreased Sexual Desire
·         Greatly increased or decreased Ambition
·         Affairs, especially with someone younger
If you ticked off about 70 % of this list, then you most probably have hit the dreaded Midlife Crisis.What then about feelings? How will a MLC influence my emotions? Here goes:
·     You are discontent with life and/or lifestyle
·     Boredom with things/people who have been part of your life
·     Feeling adventurous and wanting to do something completely different
·     Questioning the meaning of life and the validity of decisions easily made before
·     Confusion about who you are or where your life is going.
You do not just wake up one morning and think this is a brilliant day for a midlife crisis. Normally there would/could have been several influences that gave lead to your situation. In fact, several conditions or circumstances can actually TRIGGER a Midlife Crisis:
·         Men/Women who marry at a young age
·         Unhappy Marriage
·         Empty Nest (when children have all left home)
·         Dissatisfaction with Work
·         Growing Older
·         Rebellious Children
·         Depression
·         Anxiety and Stress
·         Doubt
·         Debt
·         Significant Loss or Change:
o        Death of a Parent
o        Retrenchment
o        Divorce
This temporary condition could manifest itself both externally and internally.
Externally
·         Physical neglect
·         Financial miss-management
·         Social dysfunction
·         Pressure to perform
·         Correction gets viewed as criticism
·         Battle to cope with authority
·         Separated from the environment
Internally
Sometimes people in the Midlife Crisis get involved in drastic lifestyle changes which have long-term effects. For example, if you decide that it is all your partner’s fault, you could get involved in an affair or a quick divorce, only to find out, a few months down the road, that the problems were not outside of you, but inside.
·         Emotional mayhem
·         Spiritual  non-functioning
·         Anxiety/Worry
·         Fear of Rejection
·         Insecurity
·         Perfection/Pride
·         Poor Self Image
Of course there are lifestyle changes that are extremely positive. For example, you may begin to eat better, exercise, get more sleep and cut out the trivial obligations that you used to feel were so important.
Some men become philosophical about a MLC! It reads something like this:
‘Men spend their twenties NOT CARING who they are, their thirties BECOMING who they are, their forties FIGURING OUT who they are and their fifties TRYING TO CHANGE who they are…’
That is why he bought the Mercedes SLK Sports, listens to rap music and wears gold chains in his fifties!
Now what do I do?
·     Admit the truth about the situation
·     Identify where you are out of line when it comes to relationships and decide on what to do to fix, mend or abort.
·     Be realistic about your workload to prevent you from the danger of ‘burnout’.
·     Take a critical look at your health and decide how you will adjust your lifestyle to get a balance.
·     Place your home life under the microscope and devise a plan of action to take remedial steps.

Learn from your experiences and be willing to receive advice from others. It is far less painful than learning at your own expense.
Be accountable to someone.
Ask for help in terms of new goals, a path to embark on to grow and to guide you to apply wise decisions.
How do I PREVENT a Midlife Crisis?
You can help prevent a midlife crisis by re-focusing four major areas of your life:
·     Work on your relationships. By midlife most marriages are at the lowest satisfaction level they will ever be. The marriage has become dull and stale because it has been ignored. Too many pressures at work or too many activities with kids can crowd out time to understand each other and build a warm marriage relationship. Work at it! A strong marriage will help prevent a midlife crisis.
·     Re-think your career direction. Who has God created you to be? What are your gifts and talents? Are these being used in your career and does your career have a dimension of ministering to or improving other people’s lives? Doing something for others is going to become increasingly important as you age. You want to leave a legacy behind.
·     Midlife is the time to re-examine all of your values. You have three major resources: time,      money and energy. Ask yourself: ‘Am I spending my time, money and energy the right way?  Am I in line with the way God has created me as a special, unique person?’
Perhaps your midlife crisis will give you the courage to rethink your career and maybe, just maybe, do what you have always wanted to do.
·     During Midlife Crisis you need stability. If you are a Christian, follow Christ; even if He     seems so distant at times. You feel distant because you are in a crisis now. Keep on talking to God and keep on reading His Word. Read through the Psalms and let God slowly massage your heart. Get involved in a small Bible study. Most people by midlife have very few true friends. Remember, God really does care about you. If you have never given your life to God, the Bible says if you will open up your life, God will come in and fellowship with you. ( See Rev 3:20)
Food for thought
Midlife is the time when you re-examine. The Young Adult asks, ‘What am I going to do?’ The Midlife Adult needs to ask the question, ‘Why am I doing what I am doing?’