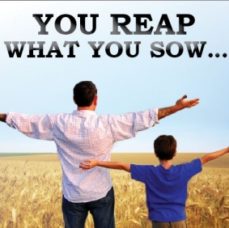 I’ve decided it’s time to get back in shape and my method of choice is a 90-day workout. A unique feature of this workout is that it’s all on video, so I follow along with a virtual room full of muscle-bound athletes that chuckle condescendingly as I struggle with my sixth chin up.
Results are not instant
A few days ago, my 6-year-old son and 4-year-old daughter joined their mother in deciding that they wanted to exercise with me. Five minutes into warming up, my son turned to me with great excitement and said, “Hey dad, look at your elbows! You almost got muscles!”
We need to be patient
My wife and I had a good laugh, but my poor son never understood what was so funny. I didn’t have the heart to tell him that it doesn’t work that way. It takes a long time and many doughnuts, followed by excessive periods of sedentary inactivity and lack of resolve to become as out of shape as I am.
And getting fit, losing weight and building muscle, doesn’t happen after a few minutes of warming up either.
Sowing seeds for the harvest
Imagine growing up on an ancient Israeli farm. The long winter months reduced the pantries to empty shells; families lived on meagre rations and dreamed about fresh bread. Suddenly, rain begins to pour and dusty fields become rivers. The father says to his young son, “Come, it’s time to sow”, and pulls huge bags of grain from the barn.
“Father” the boy exclaims, “Now we can make bread!” “No my son, this isn’t for eating. I will show you what it is for,” and together they wade into the flooded fields.
Then the father does the most incredible thing. He reaches into the sack, pulls out a handful of grain and throws it into the water! That night the boy eats his paltry portion of dinner and wonders why his father wasted so much grain. Many weeks later the water will rescind and the boy will step outside and behold a miracle. The fields will be full of tiny sprouts, racing heavenward to produce a harvest of golden grain.
Solomon referred to this ancient farming technique when he wrote, “Cast your bread upon the waters, for you will find it after many days.” Ecc 11:1.
Do not become weary
The laws of sowing and reaping are universal, whether learned by a little boy farming in ancient Israel or exercising with his dad.
Unfortunately, these are principles many adults have yet to understand.
A newly saved church member once approached me after a Sunday service feeling disgruntled. “Pastor”, he said, “The Bible says to ‘test God’ with the tithe and offering and that’s exactly what I did.”
He explained that before he became a Christian and started attending church, he had been experiencing financial hardship. When reading the Bible he learned that the “windows of Heaven” would be opened over those who give.
That Sunday he decided to “test God” by emptying his wallet in the offering plate. But the subsequent week was not as he had anticipated. His financial difficulties continued and he began to doubt the Bible. He had sown a seed, but not reaped a harvest.
A new season is coming
I chuckled, for it was much like when my son searched for sprouting muscles five minutes into his workout. I explained to the gentleman that whatever you are harvesting now is not the result of what you planted a few hours ago, but what you planted months ago, even years ago, in a different season.
Likewise, the seeds you plant today won’t be ready for harvest by the next day. But we must not be discouraged, “let us not be weary in well doing: for in due season we shall reap, if we faint not.” Gal 6:9.
What will your harvest look like?
The amazing and sobering thought is that we are always planting seeds. That comment you made, that time you spent with your family – everything you do is a seed that will produce a harvest in the future. Be careful what you plant in this season, because you will eat it in the next!
Our lives are ultimately an accumulation of the decisions we have made; a harvest of what we have sown. You cannot change today’s harvest by sowing good seeds today, but if you sow the right seeds, day in and day out, in “due season” you will reap your harvest if you “faint not”.