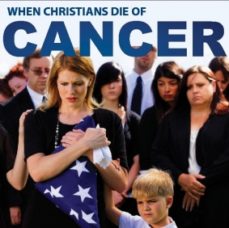 Doctors confirmed that my friend Benny Benson had a malignant tumour in his spine. He underwent treatment, but in the end more tumours appeared. Nothing could stop the spread of the disease – not radiation, chemotherapy or surgery.
He died ten months later, and I spoke at his memorial service. I still can’t believe Benny is gone.
Losing those we love
More than 500 people attended his funeral. Many of them were college students who had been discipled through Benny’s campus outreach, which he carried out with his wife, Cindy. Like so many of Benny’s other friends and family members, these students had prayed for Benny to be miraculously healed of the cancer.
But in the end, Benny got the ultimate healing – by stepping into eternity.
The big questions
Whenever loved ones are taken from us we ask hard questions. Why does God allow cancer to ravage people’s bodies? Why doesn’t He always heal when we pray? Why would He let a guy like Benny, who was only 58, get sick with cancer when he was seeing amazing results in his campus ministry?
Those of us who wear the charismatic label don’t do well when people die of sickness.We’ve been taught that God “always” heals, especially if we pray according to the latest ‘1-2-3 formula’, if we break every generational curse, and if we bind every demonic power that might be lurking behind the surface.

Your wish is not God’s command, even when it seems important
Miraculous healings do happen sometimes. But when they don’t, we assume we said the wrong prayer, didn’t exert enough faith or harboured some secret sin in our hearts. We trivialise the Lord by turning Him into a genie in a bottle.
We think He exists to perform miracles for us – as long as we rub the lamp the right way and say the right magic words. But that is a silly and immature way to approach an omnipotent God.
We cannot avoid suffering
I didn’t have the answers to such heavy theological questions when I spoke at Benny’s funeral. I prefaced my remarks by admitting that I have never been a fan of the book of Job.
I don’t like reading about a righteous man who lost everything – including his health. I don’t like reading about bad things happening to good people, mainly because I don’t want to face suffering myself. But the book of Job is in the Bible. And it is near the middle of the Bible for a reason.
Praise and trust God
The book of Psalms reminds us that praise will get us through the hard times, Job reminds us that we must keep eternity in mind when we walk through trials. Job had to learn to see life, and death, from God’s wide perspective instead of his puny human viewpoint.
Look upward, do not lose hope
Job’s faith was tested like gold. After he experienced incredible loss, he was able to say: “As for me, I know that my Redeemer lives, and at the last He will take His stand on the earth. Even after my skin is destroyed, yet from my flesh I shall see God.” Job 19:25-26.
Job made that ultimate faith confession in his darkest moment. He stared poverty, hardship, sickness and death in the face and declared that regardless of his circumstances, he would be resurrected and would live eternally with the Lord. He was so secure in his personal relationship with God that the assaults and accusations of Satan did not shake him. He persevered. He held on to faith. And instead of focusing on his bleak circumstances he looked at his bright future in Heaven.
Do not discredit your prayers
That’s how I decided to approach Benny’s death. I refused to ask whether we prayed and fasted enough, whether the healing anointing was strong enough or whether we strained enough in our faith to produce a miracle. The greatest miracle occurred when Benny stepped from this life into the next and began an eternity with Christ.
He now fully understands the words of Jesus in John 11:26: “And whoever lives and believes in Me will
never die.”
Rest in God
Of course we want our loved ones to be healed. Of course we should pray for miracles. But if God does not answer us the way we insist He should, we must rest in His all-knowing sovereignty and rejoice in the fact that Jesus has conquered death.
The power of Christ’s resurrection
Please don’t minimise the wonder of Christ’s resurrection power. Yes, cancer happens. Sometimes it kills people. But cancer doesn’t win when the suffering
person is a Christian.
If the victim of a terminal illness knows Jesus, they will experience the most powerful of all of God’s miracles when they die. We will know the power of that resurrection, too, and we will join them one day in Paradise. 

By:
J. LEE GRADY  is an author, award-winning journalist, ordained minister and ex-editor of Charisma Magazine. You can follow him on Twitter at @leegrady