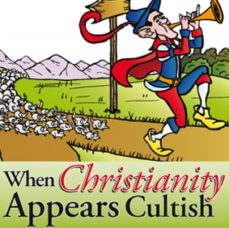 The Early Church had a major problem. A movement known as Gnosticism infiltrated the Church and attempted to separate Christians from their local fellowships, Christian leaders and the simplicity of their faith.
The word ‘Gnostic’ comes from a Greek word meaning ‘knowledge’ and the adherents of this group claimed to have special revelation from God. They saw themselves as an elite group, with the ability to impart spiritual knowledge and insight that other professing Christians lacked. Focusing on their teaching – much of it based on emotional experience – took the eyes of believers off Christ and fixed them firmly on the Gnostic spiritual leaders.

what is gnosticism?
Quite a few of the New Testament books were written to combat this error and place believer’s trust and focus back on the Living Word – Jesus Christ. Colossians, Galatians and 1 John are examples. “You are complete in Him,” said Paul as he emphasised the need to mature in their faith and knowledge of Christ. (Col. 2:10)
Believers were instructed to ensure that Christ was pre-eminent in all things (Col. 1:18). He is the undisputed Head of the Church and total allegiance should be to Him alone, never to a leader however important he or she was deemed to be by their peers.

While the Gnostics promised believers ‘greater grace’ and ‘the deeper life’, those who became embroiled in the system found themselves in a tight web of legalism in their attempt to become more ‘spiritual’.  “Oh, foolish Galatians!” wrote Paul. “What magician has cast an evil spell on you? For you used to see the meaning of Jesus Christ’s death as clearly as though I had shown you a signboard with a picture of Christ dying on the Cross. Let me ask you one question:
Did you receive the Holy Spirit by keeping the Law? Of course not, for the Holy Spirit came upon you only after you believed the message you heard about Christ. Have you lost your senses? After starting your Christian lives in the Spirit, why are you now trying to become perfect by your own human effort?” Gal. 3:1-3.
The believers were encouraged to meet and share fellowship on a regular basis (Acts 2:40-47), study the Scriptures, pray, break bread together and care for one another. The Gnostics did everything they could to draw believers away and fill their minds with the quest for ‘deeper truth’. They questioned the integrity of Christians in regular fellowship and poured scorn on the local fellowships and their leaders.
modern day error
Those who read the Epistles began to understand that the Church is the Body of Christ, wherever it is found and in whatever way it expresses itself. No badge or label marks the Church. No tight group, system or organisation monopolises the Truth. The Church is a mystic union, the Body of Christ, and is composed of all who trust Him as Lord and Saviour and call on His Name. The mark of developing maturity is that believers love the Lord and love their fellow Christians.  The attitude of spiritual superiority demonstrated by the Gnostics and their followers, in fact, demonstrated total lack of spiritual maturity. “If someone says, ‘I love God’, and hates his brother, he is a liar; for he who does not love his brother whom he has seen, how can he love God whom he has not seen? And this commandment we have from Him: that he who loves God must love his brother also.” 1 John 4:20,21. (Compare 1 John 1:6,7) Gnosticism has reared its ugly head again in these Last Days, as prophesied in 1 Tim. 4:1 “Now the Spirit expressly says that in latter times some will depart from the faith, giving heed to deceiving spirits and doctrines of demons.”

christ alone
Obviously we are not talking about sincere seeking for Truth and greater insight into spiritual matters, but about groups who attempt to deflect Christians from their basic trust and faith in ‘Christ Alone’ and ‘Scripture Alone’ and separate them for their own purposes.

‘love bombing’
I saw this firsthand while at Bible School. A group calling themselves the Fellowship of Decisive Disciples (FDD) influenced some of the students in my group. At first they were enamoured by the ‘spirituality’ of the FDD members. It seemed they had the ear of God and all other Christians. The group used a technique practised by many cults, known as ‘Love Bombing’. They poured love and attention on these students, introduced them to literature and teaching centred on their leaders, introduced them to new friends and succeeded in cutting them off from their family and friends.

legalistic faith
Persuaded that this group had the ultimate truth, these students left the Bible School and became totally submitted to their leadership. They were eventually brainwashed to the extent that they were no longer able to make personal decisions.
Every action they took was submitted to the leaders who made all their decisions for them. They were cut off from society and taken to a farm near Welkom, where they became unpaid labourers, willingly giving their service ‘to the Lord’. Typically these groups are characterised by a charismatic leader, single-minded devotion, legalism, intense renunciation of the world and rejection of orthodox faith.

who is targeted?
These groups generally set out to influence middle-class, well-educated young people between the ages of 18 – 25. Often immature and lacking solid Biblical knowledge, this group is looking for love, acceptance, affirmation and significance. They want to get closer to God and they want to be involved in a significant cause.

abnormal attention
They are invited to Bible Studies and fellowship meetings, linked up with instant friends and made very welcome. As they become involved, a ‘Mentor’ focuses on them and ‘Love Bombing’ begins. This takes many forms, invitations to chat, outings, praying for their special needs, telephone calls and, nowadays, SMS messages. Some young people have been known to receive in excess of 40 messages a day, affirming them as special and chosen by God.
Some of the Mentors may not even be aware of their part in this manipulative procedure as they genuinely try to help these young people. At the same time, strangely enough, they do not usually give the same attention to their own children and spouses. Often they are in unhealthy relationships with their own families.
It is not normal for people to act in such a fanatical manner and once the converts get into the system, they usually find quite a different scenario…
The young converts are drawn into ‘spiritual highs’ as their emotions are manipulated and they become increasingly dependent upon their mentors. Decisions are made in collaboration with them and they are discouraged to think independently.
Their minds are saturated with literature and teaching from the movement. Scripture is often taken out of context, carelessly used to justify wrong conclusions. Often the Bible is spiritualised to such an extent that dependence upon interpretation of the leadership is completely accepted.