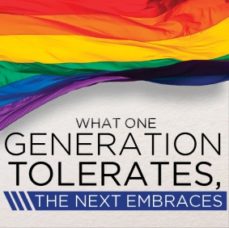 A ground-breaking contemporary Christ-ian musician, Carman, had a great impact on South Africa in the early 1990s. He writes here in the context of what is presently happening in America, but we believe the principles apply to Christians everywhere…
Christian, where is your courage?
“As a Christian in ministry for 35 years, my position should be obvious by now. I’m not going join an angry mob and throw more rocks at the next Gay Pride parade. It’s not going to win any more to Christ and I wouldn’t say anything you haven’t already heard.
But here’s what I will say. I have to hand it to the LGBT community. They have fought for what they believed in much harder than the Christian community ever did. They’re much more united than we are. They comprise only 3% of the American population and took on the 83% who claim to be Christians and won. They have marched, held politicians, entertainers, sports figures and TV networks  accountable for negative portrayals of homosexuals and even the very words they find offensive. They have even got laws passed that sodomy is no longer illegal. They have been relentless and determined to demand the equality, the respect and the position in society that they felt they deserve. And man, they have proved what hard work and determination can accomplish.
Most Christians seem content to complain to each other and none go to war for what they believe in until the change comes that they demand. So the victory goes to the ones who wanted it more and were willing to sacrifice the most to get it.
Unite and fight!
I’m not surprised at the Supreme Court’s decision to legalise homosexual marriage. In 1962, 90% of the US population wanted prayer in public school. Again 3% wanted it out. But the 3% were willing to do what the 90% were not willing to – unite and fight for it.
Since that time, 45 categories of national immorality have skyrocketed upward. Everything from violent crime, to divorce, to teen pregnancy, to adultery, to serial killing has continued to rise. We rejected God’s Word in 1962 and took our first verbal public stance against Him as a nation. America has never recovered.
Don’t be dominated by sin
Recently, an academic conference held at the University of Cambridge said that paedophilia interest is “natural and normal for males” and that “at least a sizable minority of normal males would like to have sex with children.” Unless, you missed it, the key word there is “normal”.
This is in the beginning stage of how something becomes a law and it will create another American subculture based on “normal” sexual orientation. If you think it won’t, then you are not seeing what is really at stake here. Remember Martin Luther King warned us that everything Hitler did was legal. He had no higher authority to go to other than his own government.
What I’m saying is simple: What one generation tolerates, the next generation embraces. If we allow sin to be tolerated amongst us, then we must get comfortable with ultimately being dominated by it. Unfortunately, Christians need to learn a lesson from the fearless tenacity of the 3% in the LGBT community on how to dig deep and fight the giants of this life.
Become fearless for your faith
In 1994 I wrote a song that sparked a stadium tour and said the only hope for the world is Jesus and we need God again. I collected a million names on a petition for prayer in public schools, more than any American citizen. But that was another generation, my generation. Where are the warriors for this generation? I was only a musician; it was all I knew to do.
Where are this generation’s fearless musicians, politicians and public personalities who will put their careers on the line to stand up and defend the Word of God? We need our ‘Davids’ who will face the giants and take them down and not just watch movies about it. I challenge you with this today:  After you’ve prayed, starting in your own community, what action will your first step be, to put God in your country again?” 