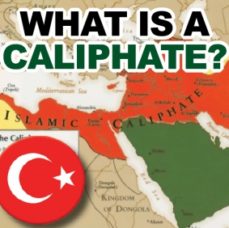 Recently Boko Haram declared North Eastern Nigeria an Islamic Caliphate. ISIS has declared a Caliphate over Northern Syria and Iraq. This begs the question, “What is a Caliphate?”

Dictatorship
A Caliph is “the commander of the believers”. A Caliphate is an Islamic state led by a supreme religious and political leader known as a Caliph. The Caliph is believed to be a successor to Muhammad. The Caliphate is a unitary state composed of all faithful Muslims (the Ummah), ruled by a Caliph under Islamic (Shari’a) law.
The Sunni branch of Islam stipulates that the Caliph should be elected by Muslims, or their representatives. However the Shiite Muslims believe that the Caliph should be an Imam chosen by Allah, and not answerable to any electoral base.

Assassinations
The first Caliph (successor to Muhammad) was Abu-Bakr (AD632-634). Abu-Bakr was also Muhammad’s Father-in-Law through his third wife, Ayesha, whom Abu-Bakr gave to Muhammad to be his wife when she was only six years old. None of the Caliphs lasted long. The Caliph Umar (AD634-644) was assassinated, while in prayer. The third Caliph, Uthman (AD644-656), ordered all Quranic documents in the world to be collected and destroyed – to preserve the unity of the text. He was murdered. The Caliph Ali, nephew and adopted son of Muhammad, married Muhammad’s daughter, Fatima. He was also murdered.

A trail of terror
The Caliphates have always been stricken with violence, rebellions, civil wars and monumental upheavals. The Rashidun Caliphate was swiftly overthrown and replaced by the Umayyads (661-750) Caliphate, which conquered all of North Africa, the Middle East, Persia and parts of India. The Emirate (756-929) and Caliphate (929-1031) of Cordoba – the Iberian peninsula where Portugal and Spain are today, were supplanted by the Abbasid Caliphate (750-1258), which is often considered the “Golden Age of Islam.”
The Abisaad Caliphate ruled from Baghdad. The Fatimid Caliphate (909-1171) had Cairo as its capital from 969. The Ottoman Caliphate ruled from 1453-1924, with Constantinople (now Istanbul), as its capital. There have been numerous other attempts to establish a Caliphate, including the Sokoto Caliphate established in Nigeria by the Fulani Jihad, from 1804-1903.

The Mahdi
In Islamic eschatology, the Mahdi is a military deliverer who Muslims believe will forcibly subjugate all peoples under Shari’a law. If you have seen Charlton Heston’s depiction of General Charles Gordon, in the blockbuster epic Khartoum, then you would be aware of one of these claimants to the title, Mahdi: Muhammad Ahmed Bin Abd Allah (1844-1885).

The Battle for Khartoum
Muhammad Ahmed, known as the Mahdi, rose from the Sufi sect which predominated in Sudan, and led a brutal campaign which culminated in the storming of the capital, Khartoum, 26 January 1885. As his 60,000 Dervishes swarmed across the defences, overwhelming the thin line of starving troops, the Mahdists slaughtered both soldiers and civilians indiscriminately and put the entire city of Khartoum to the sword. The fact that most inhabitants of Khartoum were Muslims, did not save their lives. The Mahdi had them all slaughtered to establish his Caliphate.

Disaster and defeat
Six months after the fall of Khartoum, the Mahdi died and a succession of poor harvests, epidemics, and tribal wars reduced Sudan to misery. An attempted invasion of Egypt by the Mahdists in 1891 was soundly defeated. The Caliphate of the Mahdi was finally defeated at the Battle of Omdurman, by General Kitchener, in 1898. The great grandson of Muhammad Ahmed, Sadiq al-Mahdi, launched the Umma Party in an attempt to re-establish a Mahdist Caliphate in Sudan in 1966. It was finally overthrown in a military coup in 1989.

“Islam is anti-Christ” – Luther
The Reformer, Dr. Martin Luther, taught that Islam is anti-Christ. Expounding on Daniel 9, Luther taught: “In the latter part of their reign, when rebels have become completely wicked, a stern-faced king, a master of intrigue will arise. He will become very strong, but not by his own power. He will cause astounding devastation…
He will cause deceit to prosper and he will consider himself superior. When they feel secure, he will destroy many and take a stand against the Prince of princes. Yet he will be destroyed, but not by human power.” Daniel 8:23-25. Martin Luther noted that our Lord Jesus Christ warned about false prophets coming from the desert (Matthew 24:24-26) and this certainly includes Muhammad.
John Calvin taught that Muhammad is “Apollyon” (which is Greek for the Hebrew word, Abaddon, which means Destroyer) and the army of locusts and scorpions described in Revelation 9:1-11, are the Arab and Saracen armies which waged Jihad in Muhammad’s name. John Calvin maintained that Islam is one of two horns of anti-Christ.

Deliverance from oppression
The 1643 Westminster Assembly’s Larger Catechism calls on Christians to “…pray that the kingdom of sin and satan may be destroyed, that the Gospel be propagated throughout the world…The Directory for Public Worship of God instructs congregations to: “pray for the propagation of the Gospel and Kingdom of Christ to all nations….the fall of anti-christ and the deliverance of the distressed churches abroad from the tyranny of the anti-Christian faction and from the cruel oppressions and blasphemies of the Turk.”
Truth conquers
John Calvin taught that the anti-christ forces of Islam will be defeated by the Word of God: “Christ will scatter the darkness in which anti-christ will reign, by the rays which He will emit before His coming – just as the sun, before becoming visible to us, chases away the darkness of the night with its bright light.
This victory of the Word will therefore be seen in the world. For the breath of His mouth means simply His Word…as in Isaiah 11:4…Sound doctrine is…destined at all times to be victorious over all the devices of satan…”

Understanding Islam
It is essential that we understand Islam. For this, it is vital that we understand the history of Islam, and how it can be defeated. “Slavery, Terrorism and Islam – The Historical Roots and Contemporary Threat” (300 pages, 250 pictures), was produced to cut through the layers of misinformation to understand the Islamic agenda for tomorrow, by discovering what they did in the past, and how Christians defeated Islamic Jihadists.
“Those who dwell in the wilderness will bow before Him, and His enemies will lick the dust… all kings shall fall down before Him; all nations shall serve Him.” Psalm 72:9-11. 