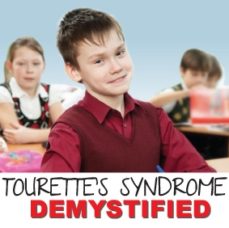 He is not trying to be the ‘class clown’.
He is not seeking attention or being disrespectful. He does not have bad manners and you did not teach him to act like this. He only has Tourette’s Syndrome (TS) – which is more common than you may realise, and certainly very misunderstood.

What exactly is TS?
TS is an inherited neurological (or neurodevelopmental) disorder which has its onset in childhood (5-8 years). Diagnostically, there must be a combination of motor tics and at least one vocal tic that persists for more than a year. Since tics are preceded by an urge, TS is defined as semi-voluntary but not consistent nor predictable. The feeling is described as a build up of tension, which needs releasing. Most common tics include: eye blinking, facial movements, sniffing and throat clearing, but it could be far more pronounced. Children are less conscious of this ‘warning’ but awareness generally increases with maturity. In many cases, a complete remission of tic symptoms occurs after adolescence. Other common symptoms that only occur in a minority of cases include:
•  Coprolalia: the spontaneous utterance of socially taboo words
•  Echolalia: repeating the words of others
•  Pililalia: repeating one’s own words.
Although Tourette’s is largely believed to be genetic, environmental and psychosocial factors also influence the severity of the tics. It is also suggested that auto-immune processes may affect tic onset.

There is always hope!
“My son was in art class, and doing his classic core tic with his eye-crossing and hand-twisting, when the teacher stopped the class and said out loud “Hey, stop crossing your eyes and pay attention to me!” This jolted him out of his tic in a stunned manner (typically he is unaware), and then the whole class erupted with, “he can’t help it, he has a tic”. The teacher asked my son for confirmation and apparently she looked a bit embarrassed when he confirmed it. He then turned to look at the class and said with a laugh in his voice, “Was I doing that eye-crossing-thing again guys?” Not only did he use humour to cope, but also engaged the whole class in a common mission: to educate and demystify. Today, I look at my son, and just for a moment, I have no worries for his future.” *Story adapted from http://tourettenowwhat.tripd.com

Important factors to consider
Only about 3% of Western school-age children have Tourette’s and it is three to four times more frequent amongst boys than girls. About 40% of people diagnosed with TS have ‘pure-TS’ with no other disorders. Co-occurring diagnoses most often associated with Tourrette’s are ADHD (Attention-deficit hyperactivity disorder) and OCD (Obsessive-compulsive disorder). It is often more important to treat these conditions since they can cause more functional disruption for the person.

Although stress does not cause TS, it can make it worse. Change schools/jobs/lifestyle if you have to. Moreover, constantly asking the child to control his tics or “to stop it” is not only useless but creates unnecessary tension. Lastly, a child who is misunderstood, teased or even punished will fare much worse than children who enjoy a supportive environment. “Let all that you do be done in Love.” 1 Cor 16:14

What will help?
The Lord is gracious and compassionate – the world will be a much friendlier place to live in if we can adopt just a little bit of His character. Education is often the starting point since understanding may prevent bullying, teasing and embarrassment. Pay immediate attention if such secondary social and emotional problems arise. The child with TS needs to be reassured and tics often subside with explanation. Books such as: ‘I Can’t Stop!: A story about Tourette’s Syndrome’ by H. L. Niner may be a good tool to use at home and school.
In most cases medication is unnecessary, but you still need to seek medical help. Furthermore, therapy, relaxation techniques and exercise are useful tools to alleviate tics.  People with Tourette’s may learn to camouflage or suppress socially unacceptable tics until they can get to a ‘safe’ place for release.  Families can contact The Tourette Syndrome Support Group 011 326 2112 or www.tourettesyndrome.net for info.